How can it be true? How can we have higher taxes than Sweden1, where taxes are so high that everything is free, there are ponies everywhere, and everyone is happy2?

It depends on how you measure it.

The Wall Street Journal posted a piece about this Monday, offering the statistic (that most journalists have offered) that the US collects about 26% of GDP in taxes, compared to an average of 34.4% for other industrialized countries.

First of all, the fact that we collect 26% percent of GDP in taxes is crazy—for years, even decades, the total take would end up around 20% of GDP, no matter how high or how low the tax rates went. Tax collection has become much more effective in the last 10 years, and a lot of what the IRS would call the “tax gap” has been closed.

But yes, the amount we pay in taxes collectively is lower than most industrialized countries.

But there is another way to look at it.

What about tax rates? Who has the highest tax rates in the world?

The US is close to the top.

The top marginal income tax rate at the federal level is 39.6%.

Catching up to Sweden!

We’re not done yet. We now pay a 3.8% surtax on investment income, which was intended to fund Obamacare. That makes it 56.7%.

Only four countries in the world are higher3. Sweden, Finland, Canada, and Belgium4.

We’re not done yet!

We’re not done yet!

In some localities (like New York), there is something called an “unincorporated business tax,” or UBT, so if you have an LLC or sole proprietorship, you pay another 4% on your net business income.

We haven’t yet discussed property taxes. In high-tax jurisdictions like New York, New Jersey, Connecticut, or Illinois, you can easily have a tax burden of $20,000 annually on a middle-class home. I have heard that property tax bills of $50,000 to $70,000 are pretty common. Nobody takes this into account in the global comparisons.

Even where I’m from, in the impoverished eastern part of Connecticut, it’s not uncommon to see $4,000 property tax bills on houses that are worth about $130,000.

So is the US a high-tax jurisdiction or a low-tax jurisdiction? Or a better question might be: How can we pay so little compared to other countries if our tax rates are so high?

The Most Progressive Tax Code in the World

I think if I were an economics PhD student, the topic I would pick for my thesis would be to measure the progressivity of income taxes around the world. Like, how much people in low brackets pay compared to people in high brackets. This is an important question.

A lot of people spout off about taxes without really knowing what they are talking about. So let’s pull up the latest tax table from the IRS: 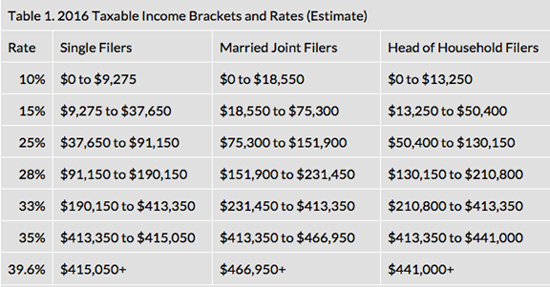 So you might recall the Mitt Romney biff from the last election when he said that half the country pays no income taxes, and people thought this was a very tone-deaf thing to say. If you look at the table above, you can see that everyone pays at least some tax. So what gives?

Here are Sweden’s tax brackets, in USD (from Wikipedia):

So as you can see in Sweden, everyone pays a decent amount of tax. The rates are high, but the tax code is not all that progressive.

And this is how the OECD reports Sweden has a much higher tax burden than the US: the tax code is flatter, and everyone pays. Lower class, middle class, upper class—everyone.

Progressive tax codes are the worst things in the world.

With a progressive tax code, you can divide people into groups and turn them against each other. The rich aren’t paying their fair share. The poor aren’t either. There is a lot of hate and discontent.

But really, it all comes down to incentives. High marginal tax rates create a disincentive to working hard and producing cool stuff.

If Joe Shlabotnik makes $25,000 a year and his marginal tax rate is 15%, he has no disincentive to go to work. He gets to keep 85 cents of every dollar.

What if it were over 90%, like Bernie Sanders wanted? Would he still go to work then? He might not.

You want guys like Elon Musk to keep going to work6.

Nowhere in this essay have I said that these tax rates are unfair. They may very well be fair. I am not getting into a political discussion here, nor am I complaining about my taxes.

I am saying two things:

I am no fan of Trump. And I’m not sure why he was complaining about high taxes, with all those NOL carryforwards. But as you travel around the world, taxes here are not especially low. The US has this reputation as this Wild West capitalist fantasyland, but nothing could be further from the truth.
___________________

1 We don’t, but it’s close.
2 Ranked 58th in suicides.
3 Not counting Aruba.
4 France got rid of their 75% top rate, for reasons you might expect.
5 In other words, a lot of people think they are taxpayers, but they aren’t. They have tax withheld over the course of the year, then get it all back (and then some) as a refund.
6 Musk would probably go to work if his tax rate was 100%, because that’s who he is, but most people aren’t wired like that. Certainly not me.

Nice article. I don’t think it mentions the VAT. The US is the only major developed country without a VAT or national sales tax. That’s the major difference in overall tax revenue collected. It’s a tax on consumption, rather than saving or investment.

It’s interesting to see that Sweden has become much less progressive in tax rates, but collects more overall in taxes.

Other developed countries have to collect more in taxes because they can’t run large deficits the way we do. They don’t have the world’s reserve currency.

If I could make one change to the personal tax code, it would be to do away with the advantage given to financial income.  As Jared points out, high rates are a disincentive to work, but only labor and ST gains are subjected to the high marginal rates. Make every dollar a dollar: wages, capital gains, interest, dividends and you’d eliminate the problem of billionaires paying lower rates than their secretaries.