Tuesday was the day when the dollar broke out of its long consolidation—and it’s headed higher. 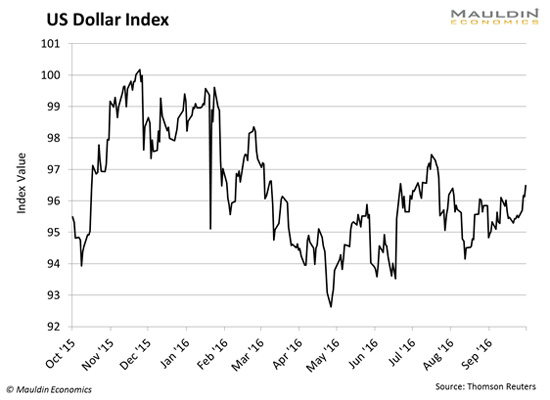 No doubt about it. This has implications for… everything. I’ve been yapping for months about how FX was going to be the primary driver in the markets. And it’s happening.

This happened to gold:

And this happened to USDJPY, which I have been saying has been undervalued for some time: 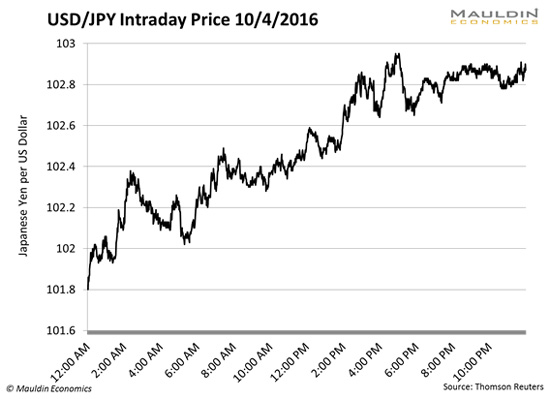 Gold miners were down almost 10% in a day—now, that is a few standard deviations.

Meanwhile, the low-vol trade is starting to unwind. Check out this chart of SPLV, one of the low-vol ETFs: 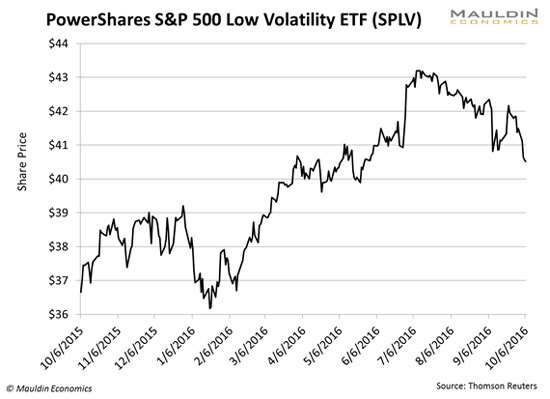 And utilities are absolutely falling apart: 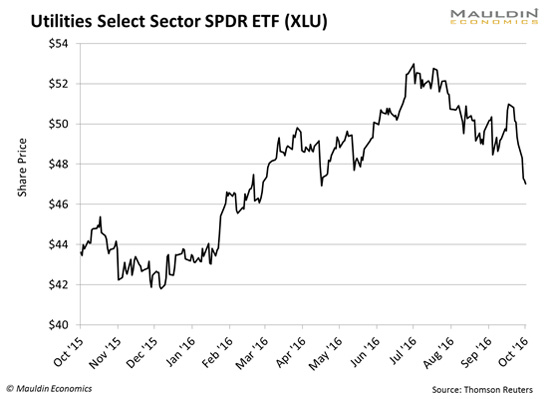 There are a lot of “safe” trades that people have been hiding out in, and the market has a way of smoking people out after a while.

So is there any safe place to be?

I take that back. It is safe to be in cash, as we discussed here.

Newsletter guys have a reputation for being bearish all the time and saying that collapse is just around the corner. I hope I haven’t earned that reputation. My views are a little more nuanced.

But in the last few weeks, I’ve been getting more and more pessimistic, and I’ve talked about some of those things in The 10th Man, like the stupid low-vol/high-dividend trade, which just a few weeks ago I said was in danger territory.

So a few points:

“If we do get a recession, that is probably going to be the end of capitalism as we know it in the US.”

What do I mean by that?

Let me ask you a question: If the stock market goes down 20% or 30% like I think it might—someone will get blamed.

Who do you think will get blamed?

Who do you think should get blamed?

A bear market certainly won’t be blamed on the Federal Reserve and their quantitative easing and ultra-loose monetary policy, and their inability to raise rates even with unemployment in the 4 handle. It won’t be blamed on providing so much liquidity for so long that even the slightest withdrawal of it causes a global recession.

It will be blamed on:

I’ve seen this movie before, and I know how it ends. It ends with even more regulation, and perhaps even a financial transactions tax (which is something that Hillary Clinton’s party wants), the biggest economy-killer known to man.

So there is a lot at stake here. We really, really do not want a bear market. But we’re going to get one. That’s capitalism, or at least what’s left of it.

Having said all that, the hedge fund community is probably going to benefit from this. And not just hedge funds, but all active managers generally.

I would say the primary beneficiary of ultra-loose monetary policy has been—indexers! Active managers have generally been pushing back against it for the last five years, to the detriment of their own performance. So I think finally we will see the benefits of active management.

A question for Jared— I get that a stronger dollar is a hindrance to precious metals. However, you also recently espoused on the long term hold premise to gold and the miners. Should I assume that you view this gold correction as temporary and probably already more than 50% of the damage has been done in price if not in time?  And that you believe that gold would transition back into it’s next upleg sometime next year? The assorted global central bank problems certainly still remain and the likelihood of a very prolonged period of negative real rates continues quite high.
Thus,  pain now but reward later .
Are these assumptions correct? Or have you changed your viewpoint?

everything you say is plausible.
HOWEVER, the Federal Government owes gazillions of dollars. Why would it raise interest rates on itself?
that’s akin to a guy with a mortgage going to his bank and saying “hey, could you please raise my interest rate? I don’t pay enough.”