Le Pen is about a 10-to-1 dog. But that doesn’t necessarily mean that thinking she is going to win is contrarian. 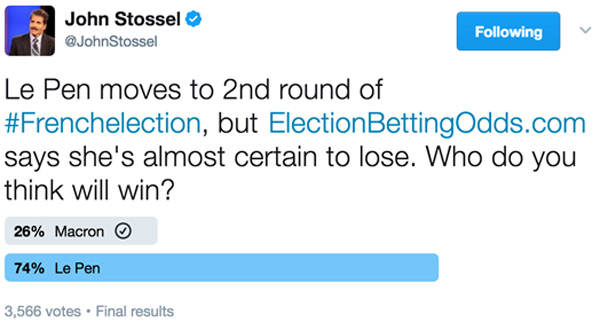 So the markets are pricing in a 10% (or less) chance of a Le Pen win, and yet everyone thinks she is going to win.

How the hell do you explain that?

Late in the third quarter of the Super Bowl, the New England Patriots had an infinitesimal chance of winning. 99-to-1 against, at least. Would you have taken that bet? Probably not.

I think if you ran that simulation again the next day, people would have taken 4-to-1 odds on the Patriots winning.

This is what we call recency bias. Short-term memories are more powerful than long-term memories, so we tend to extrapolate what just happened out into the future.  In financial terms, if a crash just happened, people will then think that crashes happen all the time, and bid up the price of crash protection.

Even though the polls show Macron really far ahead (much further ahead than Hillary was against Trump with two weeks to go), deep down, everyone thinks Le Pen is going to win.

That is how you can have an outcome that is statistically improbable (a Le Pen victory) actually be consensus.

This is the whole point of The 10th Man. When everyone thinks alike, nobody is thinking.

Right-wing populism has had such a spectacular run (and attracted a lot of media attention) that people think it will continue forever. But it’s worth pointing out that Hofer lost in Austria (although barely), Wilders lost in The Netherlands (quite handily, actually), and the Alternative for Germany (AfD) is nowhere in Germany. Also, Trump is not governing quite like the populist that you might have expected, based on how he campaigned.

I see this all the time—lots of people think they are being contrarian, and they are really not. If you really want to be a contrarian investor, state a position that is so unpopular that it will piss people off. Why is that so hard? It’s easy to be wrong if the whole herd is wrong. There is nothing worse than being wrong and alone.

I was saying that there was a Canadian housing bubble in 2013. People were furious with me. I had about 30-40 people cancel their subscriptions. Now, it is much closer to consensus, which means the easy money in the trade has already been made (in the exchange rate).

Today, if I went on CNBC and said that AMZN was due for a 50% correction, I would get laughed off the set. Do I necessarily think that will happen? No, but the example shows you where consensus is.

If I went on CNBC and said that people should invest in actively managed funds and not index funds, I would get yelled at. On the air.

I’ll let you in on a little newsletter writer secret—if I float an idea in a letter and I get lots of hate mail and negative feedback, I know I have to do some more due diligence. I know I’m onto something. I have made a lot of money that way.

I’ve spent some time studying French politics. I heard someone say the other day that Clinton/Trump is a direct parallel to Macron/Le Pen. Not really. Le Pen’s economic views are actually very far left, and while Trump is sometimes associated with racism and xenophobia, Le Pen is pretty forthcoming about her xenophobic views. Most of France finds her distasteful, and it’s very unlikely (short of a massive terrorist attack) that Le Pen will amass enough votes to form a simple majority.

Meanwhile, a better comparison for Macron would be former New York City mayor Michael Bloomberg. Both of them have straight-down-the-middle politics— conservative on economic issues, liberal on social issues. Robby Soave at Reason went on TV the other day saying that Macron is a libertarian. There are no libertarians in France, but it’s an okay juxtaposition.

In the meantime, if you put on a trade and you feel pretty smug and contrarian, maybe take a poll and see where everyone else is on the same issue. You might find that you have company, which is never a good thing.

Nationalism is ALWAYS a right wing philosophy.  The right subsumes the people to the idea of the nation (which is always run by the few).  The left does not; instead it says the people should have the ultimate power.  Ultra-right nationalist governments, like that which Le Pen seeks to create, are not uncommon in the world.  Iran has one, Turkey now has one, and possibly America will have one in the not too distant future.  Ultra-left governments are incredibly rare because when everybody has the power actually nobody does.  Its anarchy -  See 1968.  The farther left a government is the harder it is to get the trains to run on time, so to speak.  People don’t put up with ineffective for long.  They don’t like brutality (right wing nationalism) either, but when you go down that road, its much harder to turn it around.