As you may have seen, the VIX dipped under 10 on an intraday basis the other day: 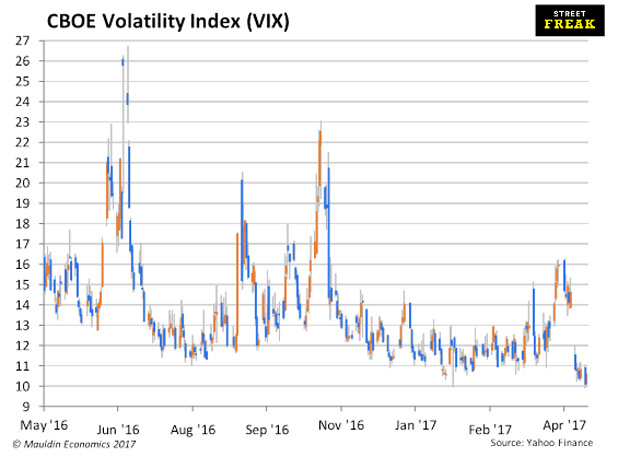 Meanwhile, short interest has reached an all-time high in VXX, the ETN that is supposed to track the VIX.. Remember, if you buy VXX you are getting long volatility, so basically what we are seeing is an overabundance of people rushing in to sell volatility… at the all-time lows. 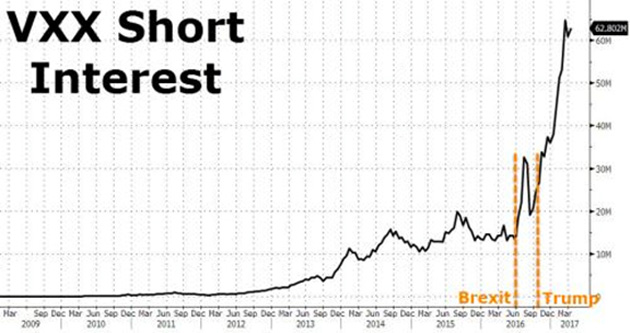 We spent last week talking about bubbles—is there a bubble in short volatility strategies? I think there might be.

Please stop and read this terrific piece by Dean Curnutt, CEO of Macro Risk Advisors, on Bloomberg View. In it, he talks about the idea that financial insurance is different than conventional insurance. With insurance against hurricanes or fires, for example, the event you are trying to insure against is truly exogenous. Hurricanes (for all intents and purposes) are independent events, and occur without respect to how many people buy insurance.

But that is not the case with financial markets insurance (like options). As opposed to earthquakes, which are exogenous events, a crash (caused by a rapid unwinding of positions) can be an endogenous event, as Curnutt explains. People put on a trade, it works, which encourages more and more people to pile in… until it eventually stops working. Then everyone will want to get out—all at once.

I try not to bring this up in mixed company, but this is just one of many dashboard warning lights that are flashing magenta right now. The other ones I talk about all the time are overheated housing markets in Canada, Australia and Sweden—it appears that Canada is cresting as we speak. But what I really want to talk about is the idea that we might possibly have an indexing bubble.

Is There An Indexing Bubble?

Everyone knows by now that assets have been fleeing actively managed funds into passively managed mutual funds and ETFs. It’s an old story. Everyone knows about the popularity of Vanguard. Some people have made their reputations on this. The story is compelling—invest in this product that usually beats most competitors but costs a lot less. Where do I sign up?

I’ll poke holes in that logic some other time. For now, I want to talk about the idea that this strategy has become so popular that it is a bubble in and of itself. This is a frequent topic of discussion online. The index fund bulls/promoters usually point out that just a small fraction of assets have switched to passive—there could be a lot more to go. That is true. The index fund bears/detractors point out all the distortions that are happening from indexing, like:

Entertain this thought for a moment. If you lived through the dot-com crisis, you remember what that was like. People day-trading at their desks at work, cab drivers giving you stock tips, all that kind of stuff. Mania. The stuff we were talking about two weeks ago.

What if indexing is a mania unto its own?

Clearly, there isn’t the euphoria there was in 1999, but people are pretty excited about their index funds. Excited enough that Vanguard gets $2 billion in new assets a day. Meanwhile, long-short guys have a tough time scratching together $50 million for a launch.

Remember how this stuff works—you don’t necessarily need an exogenous shock for this trade to fall apart. As previously described, greed takes over, and it can just stop working and unwind.

What would an indexing unwind look like? Down 20%--thought you were diversified!

Just kicking some ideas around. Privately, I would say that, while popular, indexing may not have reached bubble stages yet. This is all new territory, so I don’t know.

What I do know is that stocks in the U.S. have become very expensive, which should not be a controversial statement. I don’t really want to own expensive stocks. Neither should you.

In the Street Freak portfolio, there are only a handful of U.S. stocks. And most of them are not expensive. There are lots of opportunities that are not stocks in the S&P 500 Index. There are lots of places in the world that are attractive right now. It just takes a little digging. That’s what I do for my subscribers.

One final thing (and this is important)—I’d like to invite you all to become subscribers to my new podcast The Monthly Dirtcast. In my writing I tend to be the blind-you-with-science gearhead, but this is a very different sort of financial podcast. It’s not all about markets and macro. It’s about finance, highbrow—and lowbrow. In my latest episode, I interview a broker who buys and sells dental practices. Sounds boring, until you learn that private equity is getting involved.

Check it out!  I think it’s one of the best finance podcasts out there. I can offer you a money back guarantee.

Just because the real estate market in the Toronto (well known as the epicenter of the universe) and to a lesser extent Vancouver is in bubble territory does not mean that there is a real estate bubble in the rest of Canada.  Toronto does not Canada make.  Enjoy your articles and your insight.

Jared, Thanks for your excellent newsletter. It’s not a stock bubble or a bond bubble. It’s a counterfeiting bubble. Counterfeiting currency drives all stock indexes up the same amount on the same day the world over. It’s a counterfeit currency bubble. Dow was about 1,000 silver dollars in 1966 and is about 1,000 silver dollars today. Stocks have not gone up in fifty years in real money. In 1903 the Dow was 75 ounces of silver and in 1982 the Dow was about 75 ounces of silver. These are long periods of no progress in real money, only progress in fake, man made, manufactured, counterfeited scores. It’s totally a rigged game. Real estate, stocks, go up the same every year, and are correlated to bank financing and counterfeiting. Counterfeiting is a felony. The Fed should be prosecuted for it’s felony crimes. Index investing is just a way to stop doing 500 hours of time wasting research every year. Nothing matters except counterfeiting. If the counterfeiting at the Fed stops, the Dow will fall 90% back to $1000, where it was at the beginning of this massive fake bubble in 1982. Fed has created $18 Trillion just in fake counterfeit public debt, since 1986. We live in a fake man made world.