If you haven’t noticed, I’m not too forthcoming with stock picks in The 10th Man, or anywhere else. That’s out of deference to my paid newsletter readership, who probably wouldn’t appreciate me spraying the internet with ideas they specifically paid for.

I will make an exception in the case of gold.

First, let’s get the disclaimers out of the way. I have held gold in all its various forms since 2005, and I’ve been public about that fact. I still hold it, and I have held it through good times and bad.

The purpose of this newsletter is to communicate why I think things will get better for gold, perhaps in a matter of weeks.

Why? It’s a Hunch

No really, it is. You look at the chart, and it’s a massive two-year consolidation pattern, and it’s about to break up or down. Looks to me like it’s going to break up. 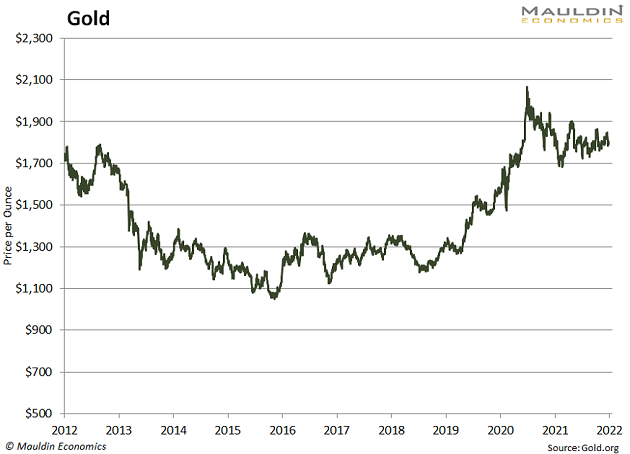 Things are a bit different than the bubble days of 2011. I remember those well. Cash for gold stores across the US, nonstop gold commercials on Fox News, people lighting APMEX up like a Christmas tree… fond memories. I was 37 years old at the time, with less experience trading, and I did not have the presence of mind or wisdom to realize we were in the midst of a giant bubble. But that’s what it was. It was a speculative frenzy.

We are nowhere near that today.

Interestingly, the demand at the bullion dealers is pretty brisk. Ever since the pandemic, retail investors have been hoovering up retail-sized coins and bars, and the premiums have blown out significantly, far above 2011 levels.

That’s out of sync with the massive paper gold market, consisting of futures and ETFs. I don’t have any evidence to support this, but there seems to be a lot of gold shorts out there. Again, I have a hunch. Gold is far below where one might think it would be given the money printing of the last two years. But then again, gold does what it does in its own time.

But if there are a lot of shorts out there, the move higher could be explosive.

Lots of people I know (myself included) are waiting for the break higher to buy. If you wait too long, it might be too late.

Gold has returned about 4% a year for the past 100 years, which is less than impressive. Certainly less impressive than stocks, which have returned about 9–10%. But there have been periods of time (1980, for example, and 2011) where the returns have been explosive. It is important to note that both of these bull markets occurred after 1971, when the US suspended convertibility.

There are a lot of dillweeds out there who play the chart game and say gold has had negative returns since 2011. True. But if you go back to the lows of 2000, gold has actually returned more than stocks. That was my thesis when I invested in gold in 2005—that it would outperform stocks over time. And for most of the last 17 years, my allocation to gold has met or exceeded my stock allocation. I don’t regret that, though the last couple of years have admittedly been difficult.

If an asset goes down or sideways for a period of time, investors lose faith. I used to have a Daily Dirtnap subscriber with enormous gold holdings who wrote me lengthy emails expressing his frustration with gold. I played gold psychologist for a while, but eventually left him to his own devices. I had my own problems with gold. How else to explain the fascination with bitcoin over the past few years? Who needs gold? It doesn’t go up?

It might be tempting to replace your gold holdings with bitcoin, but bitcoin does not solve any problems you currently have. When you add it to your portfolio, it increases your risk. It is highly correlated with tech stocks—it has turned into a long-duration asset. When you add gold to your portfolio, it decreases your risk. It isn’t much correlated with stocks or bonds or anything else. Everyone should hold a little gold, even if only for diversification purposes.

So, I think things are going to get better soon. I am somewhat sad to say that at the moment, it is my best idea. Kind of tough to pick stocks in a correction. I’m not that good.

Of course, all of this could turn to dust if gold breaks down instead of up. Gold does have an infinite capacity to disappoint. But I am excited that people I respect are getting excited about it. I have good company in the trade.

That’s my pitch. I hope you liked it.