The Labor Force Participation Rate is rebounding a bit from the depths of the pandemic, but it’s still far below the highs achieved around the turn of the millennium. If there is one chart that exemplifies the rise and fall of a civilization, it is this: 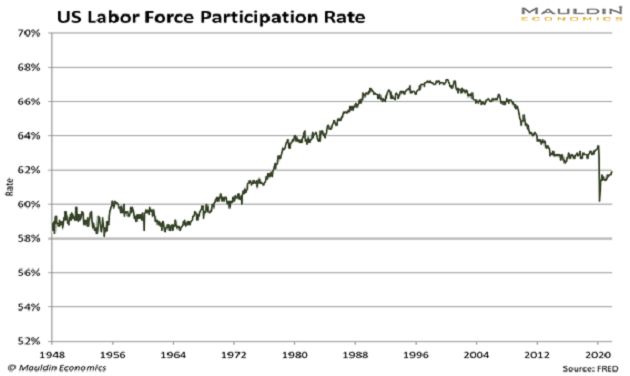 That isn’t hyperbole. A recent op-ed in The Wall Street Journal by Mene Ukueberuwa talked about the sheer number of workers exiting the labor force, along with the economic and social consequences. The immediate economic implication is a worker shortage. There are more job openings than applicants, which has increased wages for those who choose to work. One in eight men are no longer working, nor looking for work.

There has been much discussion of the Great Resignation, the phenomenon where workers quit their jobs in favor of retirement or doing nothing. This social phenomenon is very difficult to pin down. On one end, high-wage workers have left the labor force because of the stresses of working during the pandemic, with round-the-clock Zoom calls and isolation. On the other end, low-wage workers have quit their jobs, mostly in service businesses, because they find the work undignified and the conditions medieval. For a time, they could make ends meet with stimulus checks and child tax credits, but those have run out. No one is really sure what they are doing for subsistence in the meantime.

If you’re president, you want a lot of people working because more people working means more output and higher economic growth. That’s one reason. But another reason you want people working is so they have things to do—idleness poses political problems. People who are not working (especially men) can become disaffected and angry, and make trouble in a variety of ways. And idleness tends to beget idleness, as people lose whatever skills they have left. Then you have generations of people not working.

Our attitudes toward work have changed in the last 20 years, perhaps significantly. In 2000, when the labor force participation rate peaked, people were putting in very long hours—and loving it. The book Monkey Business, by John Rolfe and Peter Troob, talked about bankers putting in 120-hour weeks. But even outside of banking and tech, people were working very hard.

We’ve seen a shift in priorities away from work and ambition toward something called work-life balance, with increased parental leave, time off, and other amenities. Even people who are not strictly unemployed are perhaps underemployed, working fewer hours than they used to.

Work is good for the spirit. There are few things more rewarding or satisfying than putting in a hard day’s work, accomplishing one or more things, and going home tired but happy. Idleness is a form of spiritual sickness—sleeping in until 10 a.m., fooling around on social media, playing video games, maybe taking some drugs, and accomplishing nothing. The decline in the labor force participation rate is happening for a variety of economic reasons—automation, the Great Resignation. But part of it is our shifting cultural attitudes toward work. Work is something to be avoided at all costs.

The labor force participation rate in Argentina dropped to 38.4% in 2020, during the pandemic. Now it stands at 46.7%. A labor force participation rate below 50% means that less than half the country is working—and supporting the other half that is not. It enlarges the welfare state and creates generations of institutionalized dependency that is difficult to reverse. Generations of Peronism has destroyed the culture of work that once existed in Argentina. The country’s problems aren’t simply economic, a matter of a rapidly depreciating currency and high inflation. They’re also deeply rooted in cultural norms around work.

According to Ukueberuwa, “Thirty years ago, America’s prime-age work rate was nearly 10 percentage points above Europe’s. Now Europe’s is a couple of points higher than America’s.” That’s a big loss in competitiveness. We used to make fun of Europeans for being lazy. Now, they have surpassed the United States in terms of work ethic. And the downward trend is intact.

The US needs a leader who articulately defends work and productivity. But both Biden and Trump sought to increase transfer payments at every turn during the pandemic. You’d have to go back to the Reagan/Bush days of Alex P. Keaton Republicans to find leaders who valued hard work and thrift. If Joe Biden were to stand up and say, “Every American must contribute—every American must work and be productive,” it would probably go a long way.

But it doesn’t have to be top-down. Culturally speaking, at some point we will reach maximum frustration with the indolent. It happened in the early 1990s, with welfare reform. It will happen when it happens and not a moment sooner—and not a moment too soon.