There are currently about 2,000 ETFs in existence. Many of them are useless.

This isn’t new to you—many of you who answered my ETF survey said there are just too many.

Sample Response 1: “There are so many ETFs that choosing an ETF mix is now as difficult as choosing individual stocks and other assets.”

Sample Response 2: “Every Tom, Dick and Harry has formed one for something.”

Some people think there is an ETF bubble, because of all the stupid ETFs that are coming out. When a fund like WSKY (Spirited Funds/ETFMG Whiskey and Spirits ETF) appears on the scene, it’s safe to assume that the top is probably in. Right?

Actually, that is not the case.

The thing about ETFs is that they are much cheaper to launch than a traditional open-end mutual fund. It still costs money—in the six figures—but I know rather ordinary people who have done it.

It’s a lot of work navigating the regulations, working with an index provider, getting people to make markets—but it’s just sweat equity. There simply is not a lot of overhead.

That incentivizes people to come up with all kinds of crazy ideas for what might make a good ETF. The payoff is a bit like a call option. Spend a few hundred grand dreaming this thing up, building an index, and launching it, and if it fails, no harm done. If it succeeds, it will generate many millions in revenue.

Probably the best example of an ETF launch that went right was DXJ, the WisdomTree Japan Hedged Equity ETF (disclosure: I own it). It’s a currency-hedged equity index ETF—you can hold Japanese stocks in dollar terms.

DXJ was a genius idea—it was launched before the start of Abenomics, on the idea that if Japan engaged in quantitative easing on a grand scale, the stock market would rise, but the yen would depreciate significantly. You would only want to hold DXJ on a hedged basis. 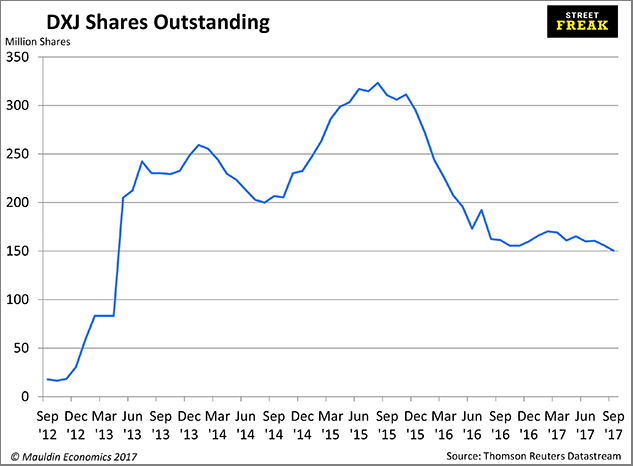 The fund currently has $8 billion under management, but at one point it was almost twice as large.

Everyone wants to launch the next DXJ. Problem is, most of these ideas are awful—and dead on arrival.

If you want, you can invest in the Nashville ETF, which is allegedly somehow correlated to economic growth in Nashville. Nashville is booming, so why not offer people exposure to Nashville?

Even if the basket in NASH gave you direct exposure to economic growth in Nashville, you have to ask yourself some questions. How is this thing going to gather assets? Will a hedge fund, pension fund, or RIA really load up on five million shares or more? Do you think the story is compelling enough to attract a lot of retail order flow?

With ETFs like these, you have to count on them getting written up favorably in Barron’s or somewhere like that. But with so many ETFs, there is just not enough bandwidth for ETF issuers to get their story out.

As I write, just 54 shares of NASH have traded on the day. It has $8 million in assets.

One of my favorites: JPHF, the J.P. Morgan Diversified Alternatives ETF. It mimics certain hedge fund strategies in a quantitative, smart beta fashion. For many people, it is as close as they will get to ever investing in a hedge fund. It costs 85 basis points, which is expensive, but cheaper than a hedge fund! 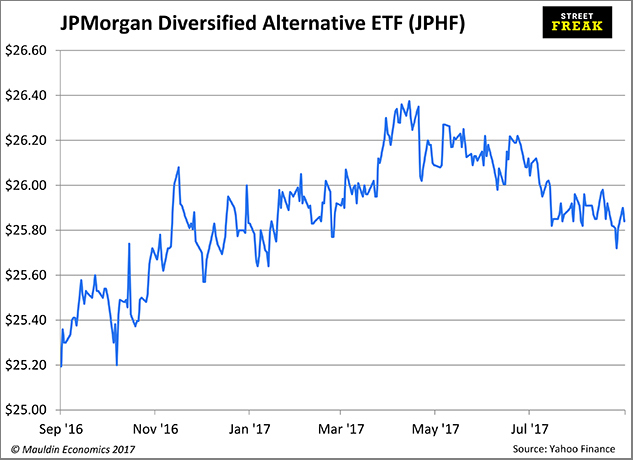 Some big asset managers actually have R&D departments to dream up what might be a good idea for an ETF. One unpleasant possibility: all the good ideas might already be taken.

The point is, all these bad ideas aren’t really hurting anybody. Sure, it creates lots of ticker clutter, and already 300+ ETFs have been closed (and there will be many more), but look at it this way: lots of choice for consumers, at a very low cost!

Of All the ETFs…

Picking an ETF is hard (after all, there are 2,000 of them). How do you evaluate which ones are good?

Quick announcement: I’m working on a service to help you do just that. It’ll demystify ETFs, assemble a diversified portfolio of them, and set you up to take advantage of all the great things about ETFs without getting caught up in the crazy stuff. That’s harder than it sounds.

People have been asking me to do this for years. I can’t tell you more right now, but I will soon. In the meantime, keep your survey answers coming in! The response has been pretty amazing, not to mention extremely useful. You can take the survey by clicking the link below.

For many people, picking an ETF means going to some website, searching through hundreds of tickers, and picking something that “sounds good.” But there is much more to it than that, when it comes to research. And then, you have to think about how one fund might interact with the rest of your portfolio.

There are a lot of bad ETFs out there. Most of them are harmless, but some are not. The investors who only spend 20 minutes in front of their computer at night with a glass of wine… are the ones who’ll get into trouble.

ETF’s are a fraud. Stocks are a fraud, because the underlying measurement in counterfeit currency dollars is a fraud. Anyone using ETF’s, stocks, bonds, measured in counterfeit dollars can expect to lose a fortune. In real US silver dollars the Dow index was about 1,000 silver dollars in 1966 and it’s about 1,000 silver dollars today. Counterfeit currency is a massive felony fraud. Owners of stocks, bonds, ETF’s, real estate (disclosure I made a small fortune in real estate) are only winning because of the counterfeit currency being fraudulently counterfeited by Wall Street at the NY Federal Reserve Bank. The US Fed is not American, not Federal, not a bank, and has no reserves. The Fed is a European owned counterfeiting cartel selling unborn American children into debt slavery. The dollars are debt notes being counterfeited to promote higher fees and taxes that can not grow to the moon. There will be a reset. Stocks, and underlying ETF’s will be unsecured creditors in a bankruptcy proceeding, getting nothing. Think of the hundreds of major corporations that have gone bankrupt from Northwest Airlines to Lehman. Wall Street counterfeits currency to pick winners and losers. Soon, Wall Street will pick America and American investors to be the losers the same way Nathan Rothschild did after Wellington defeated Napolean. It’s not if, but when. Protect yourself. No one else can or will.