The Fed has finally acknowledged (rather belatedly) that inflation is real and not going away. Where to begin?

First of all, this is a positive development. I’ve been keeping an eye on Fed speakers over the last few weeks and noticed a sharp turn toward hawkishness. I thought about selling Eurodollar futures, but I failed to recognize how quickly the Fed would change its stance. Remember, as of last week, the curve was pricing in a better than 50% probability that the Fed would hike three times in 2022. That seemed ludicrous at the time, but not anymore. It’ll wrap up the taper in the next few meetings, and a May rate hike is eminently possible.

This is very much too little, too late, but at least it is something.

In early November, I tweeted this:

So, with the Fed being a bunch of dumb dummies, waiting until the last possible minute to recognize that inflation is a problem, this probably means that inflation will no longer be a problem. What? Jared, I thought you were the mega inflation bull?

I am. But all it takes is a subtle change in language to put a boot on the neck of the inflation trade. See this chart of the Horizon Kinetics Inflation Beneficiaries ETF (INFL), which I own: 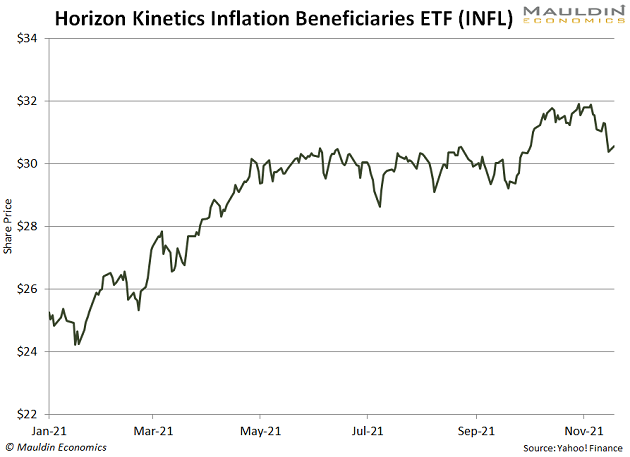 On Tuesday, inflation equities and commodities got whacked across the board. As you probably heard, oil was down about 30% from the highs in short order. That doesn’t sound like an inflation trade to me.

But the thing to understand is that the Fed will ultimately fail in its quest to stop inflation, unless it successfully causes a recession. I think the Fed’s tolerance for pain here is quite low. Which of course, is the conventional wisdom about the Fed—it is a bunch of socialist academic government employees who cannot withstand a bear market in stocks. I can say this for certain: we are going to find out.

What I mean is that the Fed is in motion, and it won’t stop tightening until it successfully inverts the yield curve. Which, judging from how the bond market behaved on Tuesday, will not take too many rate hikes.

If I sound bearish, it’s because I am. I was bearish about two months ago. We have never had a clearer signal to reduce risk. This may seem hard to believe, given the ebullient backdrop, but this rate hike cycle is unlike different ones, given the level of speculative activity and the absolute low level of rates.

The unanswered question: Will the Fed hike rates enough to stop inflation?

Inflation has been rising for close to two years now. It may be tempting to believe the Fed or some other authority can stop it, but once an inflationary psychology is set in motion, it is difficult to arrest.

Inflation doesn’t just go up for two years and then go back down. I am not aware of one single historical example of that happening. We are in an inflationary regime, which means a number of things. Inflation won’t necessarily go up all the time. I can safely predict that at some point in the next year, CPI will drop back below 6.2%. But inflation will probably remain above 4%–5% for the next 20 years, and the risk of very high inflation—double digits or higher—is still present.

That’s because inflation isn’t just a function of monetary policy. It’s a function of regulation—the more rules that companies must comply with, the higher the costs, which they ultimately pass along to consumers.

What is happening now with the Fed is a capital markets phenomenon, not an economics phenomenon. The market, over the last two days, is pricing in lower inflation in the near future. But that says nothing about 10 years from now.

If you’ve built a portfolio around inflation, like I have, the next few months are going to suck. Bad. Because right now (most of the time, actually), the markets believe in the Fed’s infallibility. The reaction to Jay Powell’s announcement that inflation is no longer transitory means the markets believe the Fed has the power to stop it.

You’re skeptical, I know. So am I. Powell is not an oak, like Volcker. And the Federal Reserve system is full of socialist academic government employees, and Biden is going to nominate even more of them. Let me put it this way: I think it’s more likely we’ll take the Browns to the Super Bowl.