You can also check out the music from my latest party here.

I have said this before: the 30-year fixed rate mortgage is the greatest financial innovation of the 20th century. Perhaps of all time.

Problem is, the 1/1 adjustable rate mortgage is probably going to be the financial innovation of 2019.

For the last five years (or more), you would have been called stupid if you even thought about getting an adjustable rate mortgage. No surprise—we were in a rising rate environment.

You may have heard some of the chatter about monetary policy this week. Stan Druckenmiller and Kevin Warsh weighed in, saying that the Fed should decline to hike rates any further.

The Wall Street Journal editorial page also sounded off about rates. And of course, Donald Trump said that the Fed should ignore the reams of economic data it is given to analyze and instead, “feel the market.” Which, in spite of being a violation of Fed independence, is not a terrible idea. The market does feel awful.

If we are not yet done hiking interest rates, we probably will be done soon. We’re reaching the end of the rate hiking cycle. The markets seem to be discounting a period of economic weakness. Nobody is really talking about it yet, but we may find ourselves in a rate cutting cycle.

I have been a vocal bond bull, mostly in The Daily Dirtnap. 10 year interest rates are down almost 50 basis points from the highs. I expect them to fall further.

People have spent the last few years trying to protect themselves from rising interest rates. Now, people should be thinking about how to get exposure to lower interest rates. Read on.

First off, falling interest rates are no fun for savers. At times, I have been an income investor. This makes things harder.

But it sure is fun on the way down. And yes, it is possible to have a great deal of fun with an adjustable rate mortgage. These aren’t exactly in fashion right now, but finance and fashion both rhyme.

At this particular point in time, I’d actually recommend a 1/1 ARM instead of a 5/1 ARM. Not super interested in hybrid ARMs right now. Think big. If this really turns into a big recession, the Fed might cut rates to zero, ten year yields might go below the all-time lows of about 1.4%, and mortgage rates might go well below 3%.

Even if you don’t think rates are going lower, you must agree that they aren’t going any higher. Not in this environment.

That sounds too good to be true, but it is very real—even though there isn’t a fixed income forecaster alive that is predicting ten year yields below 2%.

Also, I’ve been harping on about this for months, but three months ago would have been a terrific time to take your allocation to stocks from 100% down to something closer to 30%. Shoulda coulda woulda. We’re deep into correction territory and most people are still loaded up on stocks. If you were two-thirds bonds, you would be hanging tough and feeling pretty smug.

You’re probably seen that periodic table of asset class returns—bonds have not been inspiring for quite a while now. But if we get our recession—and if the Fed starts cutting rates—bonds will be the place to be. Of course, everyone was max bearish and limit short six months ago, but that is usually how it works.

Give it time. Before long, people will be talking about deflation again. They will have forgotten all about this inflation scare. Hard to feign concern about inflation when oil is trading in the 4 handle.

Interest rates are no different than anything else in the markets. When everyone believes the same thing, it usually turns out to be completely wrong. Take a look at this chart: 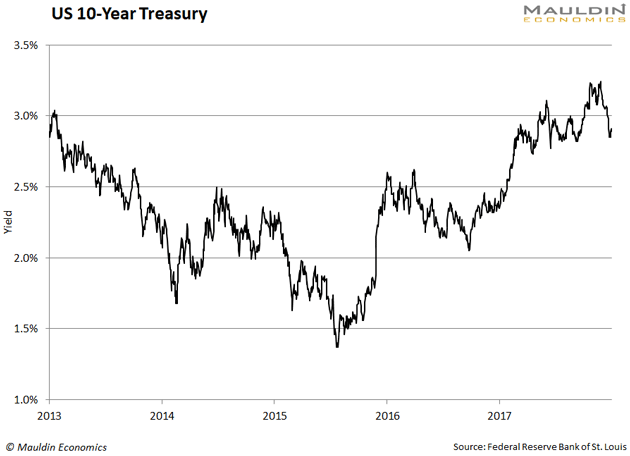 Above 3%, everyone believed that there would be inflation—and they were wrong.

Below 2%, everyone believed that there would be deflation—and they were wrong.

It’s like anything else: you want to trade extremes in sentiment.

Lots of people have been made to look very foolish with their interest rate forecasts.

Keep in mind that interest rates are negative in Europe and Japan. If they go into a recession with rates already negative, how do they ease monetary policy?

Today, the Mauldin Economics Alpha Society reopens its doors for a short time, and given this exciting environment we find ourselves in, I think it’s something you should considering joining.

This reopening is a big deal if you love discussing investments, the economy, and big picture ideas.

When you join the Alpha Society, you get all subscription services published by Mauldin Economics now and in the future… for the lifetime of the service.

As fantastic as that is, it’s not even really the main reason you should join. It’s the interactive stuff that’s the most fun, and super useful.

For example, there are Alpha Society-only Quarterly Conference Calls, which give you more direct access to all of the editors. Last quarter, I sat down with Gavekal Research’s Louis Gave for a great conversation (you can still listen to it, once you join).

There are a bunch of other terrific reasons you should think about joining the Alpha Society today. You can see what they are right here.

Just Enough to Be Dangerous

Once in a Generation