After much suspense, the FOMC again sat on their hands.

But the September vote to do nothing wasn’t unanimous. Three hawkish committee members dissented—a first in Yellen’s term as Fed chair.

What no one outside the Fed knew at the time: Two weeks earlier, the Fed’s Board of Governors had held an unannounced, closed-door meeting with top US bankers, including the heads of Citigroup (C), Wells Fargo (WFC), BB&T Corp (BBT), and Northern Trust (NTRS).

Echoing the FOMC dissents later that month, the bank CEOs asked the board to normalize rates and stop “riding the asset bubble being generated by the easy-money policies around the globe.”

That’s unusually direct language by Fed standards, but the way it stayed hidden ahead of the FOMC meeting is stranger still. It raises serious questions about the Yellen Fed’s commitment to transparency as well as its struggle to reach policy consensus. 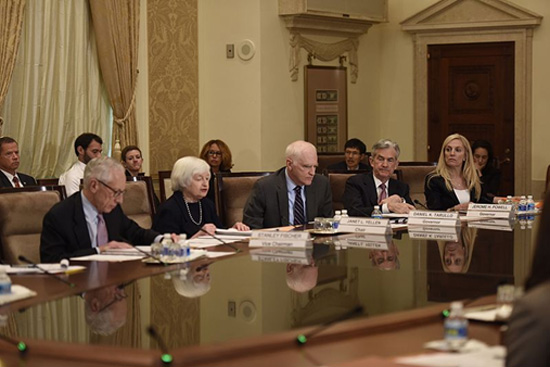 The 1913 Federal Reserve Act created a system of regional reserve banks balanced by a politically appointed Board of Governors in Washington.

It also mandated a link between the two, called the Federal Advisory Council (FAC). Each of the 12 Fed districts appoints a representative to the council, which then meets with the Board of Governors four times a year. 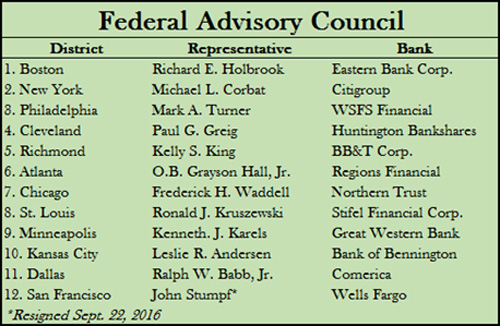 Those meetings have been happening for over a century, yet few people outside the Fed knew about them. For decades, the Fed disclosed very little.

In 2013, Bloomberg News used the Freedom of Information Act (FOIA) to obtain official records of Federal Advisory Council meetings. Now you can read them on the Fed’s web site.

Note that this was not a voluntary disclosure. If not for FOIA, we would all still be in the dark, as the Fed evidently wants. Even now, the public records omit important details, like who are the group’s officers, attendees of each meeting, votes taken, and future meeting dates.

They are still useful, though. I’ve been reading the FAC summaries since 2013 and find them much more informative than the better-known Beige Book reports.

The September 7 meeting record was especially interesting. Consider this from a section on persistently low interest rates and their impact on bank profitability.

It may be a prudent time to adjust policy thinking to shift the balance from stimulus through lower rates to encouraging investment activity through investment returns. Shifting the policy stance to a normalization posture that steadily moves to higher rates could increase confidence and reestablish the normal relationship among savers and borrowers.

If rate normalization happens in a steady and more predictable approach, the economy can incorporate this change in rates and psychology and make investment decisions based on the best allocation of capital to productive sources versus riding the asset bubble being generated by the easy-money policies around the globe.

Remember who said this: Top bankers, talking to the Fed’s Board of Governors, two weeks before a key FOMC meeting. The bankers clearly wanted higher rates as soon as possible.

The Federal Reserve Act specifically empowers the council to make recommendations to the board, but why say it so forcefully? This is the Fed, where everything is slow, measured, and deliberate. Terms like “asset bubble” and “easy money” aren’t in their normal vocabulary.

I asked a former Federal Reserve official, familiar with internal deliberations, what to make of this language.

The answer: This is not normal. Whoever said it wanted to make a point.

So, it looks like the Federal Advisory Council was trying to shake up the Board of Governors. The council wanted higher rates and said so in plain, unmistakable terms.

The board doesn’t have to agree, and it didn’t. All five governors, including Yellen, voted not to raise rates at the September 21 FOMC meeting.

All this stayed unknown to the media or public due to an unusual deviation from Federal Reserve practice. The FAC normally posts records of its meetings a week after they occur. As of September 7, it even said so on its web page.

You can see it in this screen shot taken that day.

But as we know, this meeting wasn’t typical.

Instead of posting the September 7 meeting record a week later (on September 14), the Fed released nothing until September 23. Here’s what the page looked like then.

The Fed staff added a line linking to the September 7 record. They also removed the line that had previously said, “Records are typically posted within a week after the FAC meeting.”

Through another source, I confirmed that this text disappeared from federalreserve.gov sometime between noon on September 7 and 5:00 PM on September 8—right after the FAC meeting occurred.

This suggests someone decided to delay the September 7 record release beyond the “typical” one week.

Who made that decision is unclear, but here’s what we know. 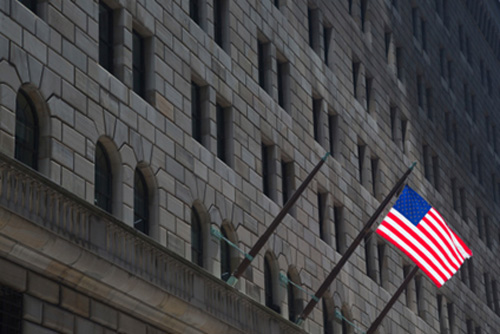 A Fed spokeswoman told me they try to get the FAC records out within a week but don’t always make it. She could not comment on September’s unusual delay or the web site changes.

Since the Fed won’t explain, we can only speculate. Combine what we know these with two other facts:

By the way, the “within a week” sentence is still missing from the web site now, three months later. That suggests the delay was more than a one-time exception.

More mysteries could be hiding in the 20-page September meeting record. I invite you to review the document and contact me with other ideas.

A Question for Mrs. Yellen

On one level, this is just normal bureaucratic behavior. Government officials don’t like being questioned. Neither do bank CEOs.

But this is not simply another alphabet agency. It’s the Federal Reserve, the world’s most important central bank, whose chair has promised greater transparency on matters of public interest.

What else are they hiding?

Well, if the FAC followed custom, it met on the first Friday of this month, December 2. But as of now, they won’t even confirm a meeting occurred.

On December 1, I called the Fed’s Public Affairs Office and asked if the FAC was meeting the next day.

The answer, after a brief pause: “It’s not on our public schedule.” Nicely vague.

I called again on Monday, December 12, and asked the same question: Has the FAC met this month? Again, they would not confirm whether the FAC had met and advised me to watch the web site.

So, it looks like we won’t know any more until the Fed feels like telling us. Will the FAC record again appear after the FOMC meeting?

As I said last week, the Federal Reserve Board has two vacancies that President Trump can fill as soon as he takes office. Maybe they can help Yellen pull back the curtain.

We know the bankers on the Federal Advisory Council saw an “asset bubble” as of September 7. Yet their own stocks have skyrocketed since then.

If the bank leaders saw an asset bubble even before this rally, what do they call it now?

Before I go, a short reminder that your window to become a Mauldin Economics’ VIP is closing by the end of today. The offer to subscribe to VIP and save thousands of dollars on a bundle of six services—which include my own income-focused services, Macro Growth & Income Alert and Yield Shark—expires today at midnight. So hurry up and claim your VIP membership now.