Bought any groceries lately? You probably weren’t alone. Nor were you surrounded by crazy people. The store mobs are perfectly rational, given recent events.

We can’t stop the novel coronavirus from spreading. We can slow it down, though, and that may prove critically important. So whether governments order it or not (and they already have in many place), people are staying home as much as possible. 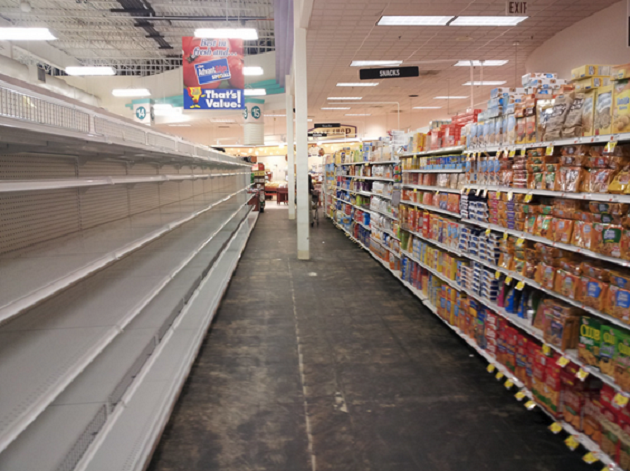 In this space a week ago, I said we need to both slow this virus and keep life as normal as possible. It has since grown clear that what’s possible is a long way from normal.

The result: We are all preparing to isolate ourselves from others as much as possible. This has economic effects, such as mobbed grocery stores.

The goal is to avoid an Italy-like scenario: overwhelmed hospitals, many deaths, and even greater damage to an already weakened economy. It may be too late; we’ll know in the next few weeks.

If the US follows the Italy pattern, the nation will effectively be at war against a microscopic enemy. We will all be on the front lines, but healthcare workers will the tip of the spear.

These “troops” will wear scrubs and lab coats instead of camouflage. But like soldiers, they will expose themselves to harm in order to protect us. We all know people who work in the medical sector. Now is a good time to thank them and encourage them for what may be coming. They will need everyone’s support.

Note also: It’s more than physicians and nurses. Running a modern hospital requires lab technicians, cooks, pharmacists, and many others. They’ll all be far more exposed to danger than we who are stuck at home.

Plus, there’s a whole supply chain behind them, without which hospitals can do little. They need truck drivers, warehouse workers, supply clerks, and more.

The rest of us will depend on these people not for comfort, but for our lives. 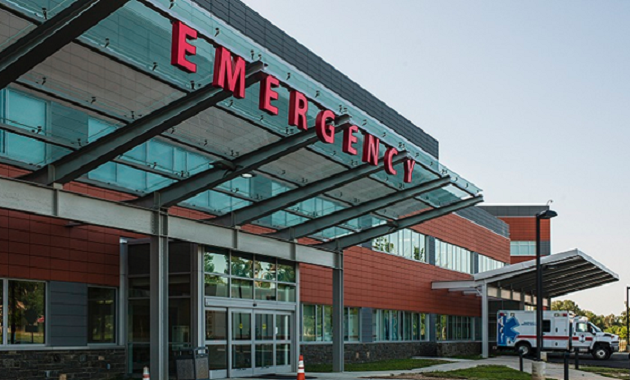 Food and healthcare are what economists call “non-discretionary spending.” They fill our most basic needs, so they get first dibs on our money.

There are exceptions, though. You need food to survive, but you don’t need a gourmet meal at a five-star restaurant. That kind of spending is discretionary. Right now, discretion is telling us to avoid it.

This is a problem for the people who work in those places.

Business has, to put it mildly, dropped off a cliff. The graph below (from my Camp Kotok friend, Jim Bianco) shows restaurant reservations made on the OpenTable app. 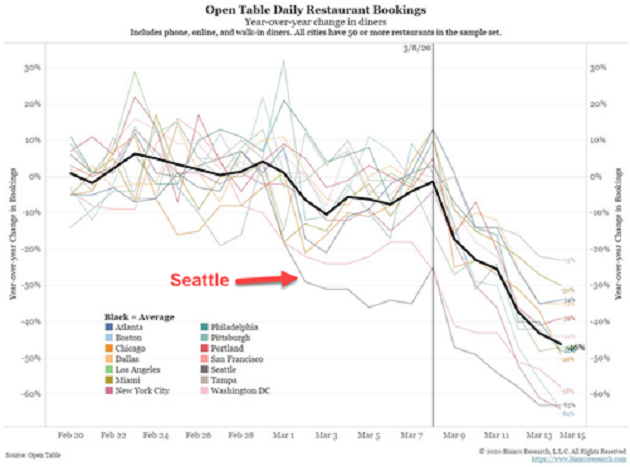 Each line is a different city, and the black one is a national average. But look at Seattle. It dropped more than a week before the average plunged, coincident with the area’s (and the nation’s) first coronavirus death. Then they all broke down on March 9, as the number of cases grew even more.

It’s getting worse, too. MGM resorts is closing many of its Las Vegas hotels and casinos. These represent thousands of jobs. Some staff will get paid furlough for a short period, but I’ll bet it won’t include the tips they would have made.

All travel-related and service businesses are vulnerable. Some won’t survive. At the very least, millions of people will lose significant income.

Treasury Secretary Steven Mnuchin went on TV last Sunday, presumably hoping to encourage the nation. Asked on ABC News whether there will be a recession, Mnuchin replied: "I don't think so. The real issue is not the economic situation today. … This is a unique situation. We are going to have a slowdown. Later in the year economic activity will pick up as we confront this virus."

Obviously, none of us know the future, but at this point most economists would struggle  to explain how we don’t have a recession. I think a bank crisis is possible as well.

Mnuchin may be right that activity will pick up later this year. That doesn’t mean everything will be fine.

Service businesses don’t have inventory… or rather, their inventory expires quickly. An empty restaurant table is a permanently lost sale, whether people eventually return or not.

Many small businesses (and probably some large ones) won’t survive this downturn, or recession, or whatever you call it.

Mnuchin and others are talking about support programs - small business loans, etc. That might help some. But a “solution” that leaves businesses with more debt and less revenue isn’t really a solution.

More likely, we will see a long stagnation as the economy slowly absorbs the coronavirus costs.

But first, we have to beat the virus… and that will take time, too.