At the restaurant, surprised diners greeted Trump with applause. We know this only because a Bloomberg reporter happened to be dining there and captured video on her phone.

Trump’s response, unaware he was on camera: “We’ll get your taxes down, don’t worry about it.”

Many investors still assume a big tax cut is coming. That, plus promises of infrastructure spending and deregulation, set off the “Trumpflation” trade following the election.

Trumpflation sort of made sense back in November, but I don’t think it does now. I think we won’t get any tax cut at all—and if we do, it won’t be bullish for most stocks. (Though Robert Ross and I have some suggestions for likely stock winners in our premium service, Macro Growth & Income Alert.)

In other words, we’re going to lose either way. 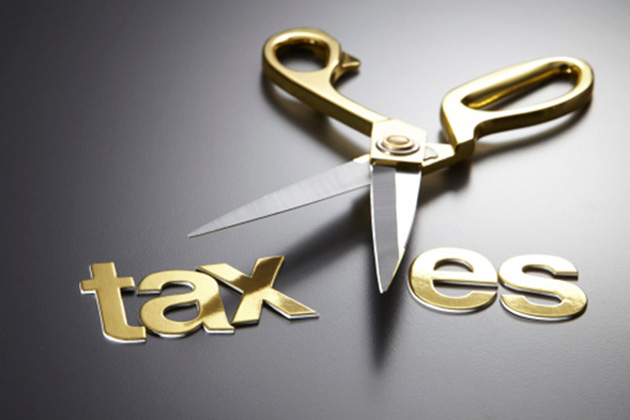 The tax reform wish list the White House unveiled last week isn’t exactly a “plan.” It’s more like an outline, minus the details.

There’s truth to this, but it’s hard to make the math work differently. The top 20% of Americans pay 84% of all income taxes. You can’t cut someone’s taxes unless they pay taxes.

Of course, the 40% of Americans who are “income tax-negative” still face payroll, property, sales, and assorted other taxes. Maybe it would make sense to cut some of those, but that’s largely a state and local matter.

This one has more merit. No one has figured out how to cut income taxes in a way that is both politically balanced enough to get through Congress and neutral to government revenue.

That’s necessary because we obviously can’t cut spending. The president’s budget proposal shifts money from other departments to defense but doesn’t reduce the total. 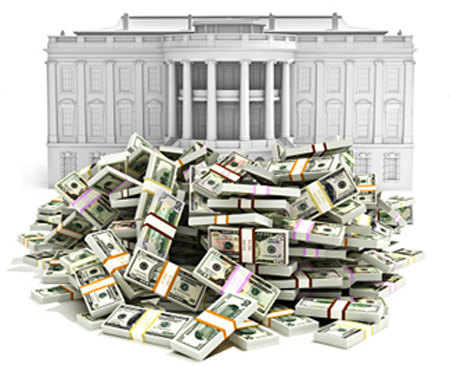 As a result, the Trump administration didn’t even try to keep the plan revenue-neutral with spending cuts. They instead claim it will spur economic growth, which will create more future tax revenue.

Probably—but not to the extent they hope. Lower tax rates should spur a little more business investment and consumer spending. Few economists think it will be enough to fully offset the lost revenue.

(Brief tangent: I really don’t like describing tax cuts as “lost revenue” for the government. The government can’t lose what it never owned. Your income is yours first. You don’t simply keep whatever amount Washington allows. I use the phrase only as convenient shorthand, reluctantly.)

But deficit spending isn’t really the problem. Our disease is excessive spending. Deficits and too-high taxes are merely its symptoms.

All government functions cost money to deliver; that’s why we have taxes. The real issue is, we have let government grow to a size where it now needs $7.03 trillion to get by (that’s how much federal, state, and local governments combined will make in fiscal year 2017).

Looking at the big picture, it doesn’t matter if the government funds itself with a) taxes now or b) borrowing now and taxes later. Both funding methods divert equal sums from private-sector uses that could be more productive.

Longer-term, though, it makes a huge difference. I’ll get to that in a minute.

But first, there’s another problem with our tax system…

Governments can’t finance themselves, since they don’t produce anything—so we have to pay for them.

Ideally, we’d have a tax system that is equitable and economically neutral, but we don’t. Our system is built to encourage and discourage certain behaviors by certain groups of people. Revenue is a beneficial side effect.

It works, too. Instead of resenting this brazen effort to manipulate us, we adopt the desired behaviors in return for tax breaks.

Here are the top five, and how much money they will save us over the next decade (or how much they’ll “cost” the government, if you want to view it that way). 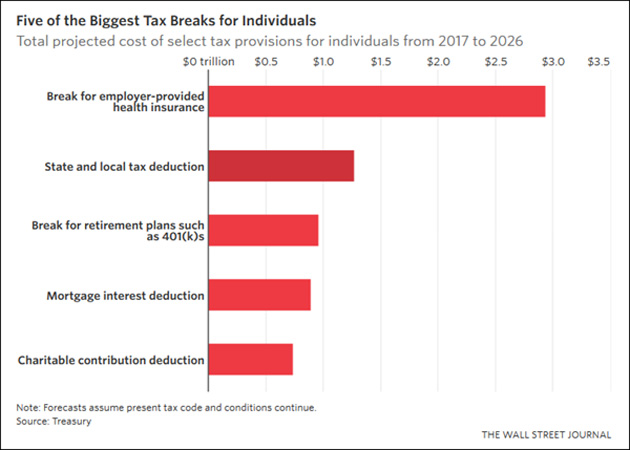 The Trump wish list eliminates the state and local tax deduction. Initially, it also omitted the retirement plan tax benefit, but the White House later clarified that Trump wants to keep it.

You likely use at least one of these breaks, and you can bet each of the favored groups will fight hard to keep them.

We’re all addicted to tax breaks. We put up with an economically suboptimal system as long as we get our little loophole.

That’s why I doubt any significant tax reform can pass this year.

I don’t see any sign of the consensus needed to break our addictions—not in the public and certainly not in Congress.

As we saw in the GOP’s failure to repeal and replace Obamacare, the “majority” Republicans actually have three distinct factions: Tea Party conservatives, mainstream conservatives, and moderates.

Democrats may look more united, but the Bernie Sanders and Hillary Clinton wings are not exactly on good terms. It wouldn’t take much to start a fight there either.

In effect, the US now has a five-party government, but without a parliamentary system’s organizational mechanisms. We also lack widely respected leaders who can build coalitions. 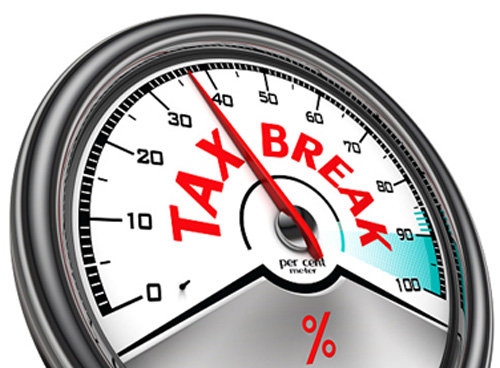 I feel very confident there will be no tax cut this year, and likely not in 2018 either. Anyone who made investment decisions presuming lower rates will probably regret it.

But suppose I’m wrong. Maybe a series of miracles will give Trump everything on his wish list. Then what?

Unless another series of miracles cuts government spending to the bone, we will get huge budget deficits.

The Treasury will issue more bonds to finance the deficit, crowding out private borrowing and forcing interest rates higher.

Higher rates will send the dollar up against other currencies, hurting US exports and corporate earnings.

At some point, long-term bond yields will look more attractive than stock dividends. Then stock prices will adjust lower… maybe a lot lower.

And while this unfolds, the Federal Reserve may be raising short-term rates and winding down its bond portfolio.

Not to mention that we’re overdue for a recession and first-quarter GDP looked dismal.

Be careful what you wish for. 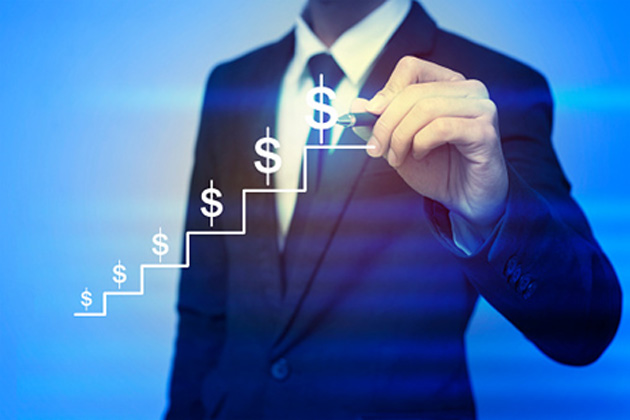 Next week will mark the “Trumpflation” trade’s six-month anniversary. It’s been a nice ride, but every roller coaster ends up back at the station eventually. I think the fun is almost over.