But if inflation is a problem, it’s not yet apparent in the average worker’s paycheck. “Just wait,” the inflation hawks say.

Like many economic dilemmas, this one includes several big assumptions. One is that having a job means you have a steady income. Maybe you want more, but you at least have some kind of reliable baseline.

A pile of evidence says that may no longer be a good assumption. If so, Janet Yellen and whoever follows her will be making a huge mistake. We all need to get ready for it. 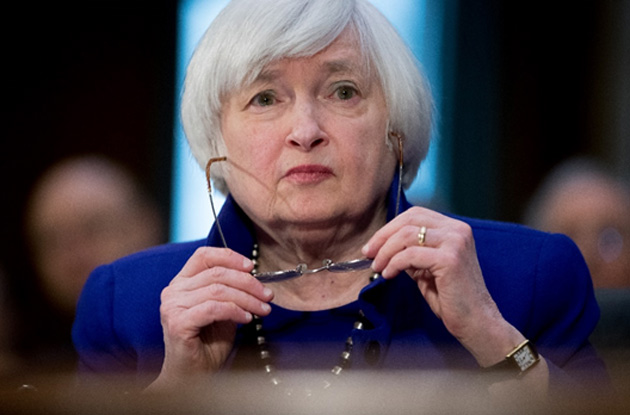 We all know people who are unemployed or underemployed – probably more than the stats say we should. Are the official numbers wrong?

Yes, they could be flawed. But even if they’re right, it doesn’t mean everyone is happy about it.

Maybe you lost your job because your company went bankrupt. No other employers in your area need your skills. You can’t sell the house and move because you’re underwater on the mortgage. With no better choices, you take a lower-skilled job at half your former pay.

Someone like that shows up as “employed full-time” in the stats. Yet they now live in a whole new world.

Such scenarios explain a lot of our discomfort. We have employment stats, we have income stats, but we lack visibility on how they interact. This makes a difference.

The New York Times had an interesting story on this point last month.

Mirella Casares has what used to be considered the keystone of economic security: a job. But even a reliable paycheck no longer delivers a reliable income.

Like Ms. Casares, who works at a Victoria’s Secret store in Ocala, Fla., more and more employees across a growing range of industries find the number of hours they work is swinging giddily from week to week — bringing chaos not only to family scheduling, but also to family finances.

And a new wave of research shows that the main culprit is not the so-called gig economy, but shifting pay within the same job.

This volatility helps unravel a persistent puzzle: why a below-average jobless rate — 4.4 percent in April — is still producing an above-average level of economic anxiety. Turbulence has replaced the traditional American narrative of steady financial progress over a lifetime.

“Since the 1970s, steady work that pays a predictable and living wage has become increasingly difficult to find,” said Jonathan Morduch, a director of the U.S. Financial Diaries project, an in-depth study of 235 low- and moderate-income households. “This shift has left many more families vulnerable to income volatility.”

Sound familiar? It should, if you work in the retailing, restaurant, or travel industry. They run 24/7 and constantly juggle staff schedules to meet shifting demand.

Among other things, this makes it very hard to cobble together a full-time income with two or more part-time jobs. The schedules inevitably conflict. You can’t be two places at once.

Data from the JPMorgan Chase Institute shows income swings are largest among the poor and the rich. 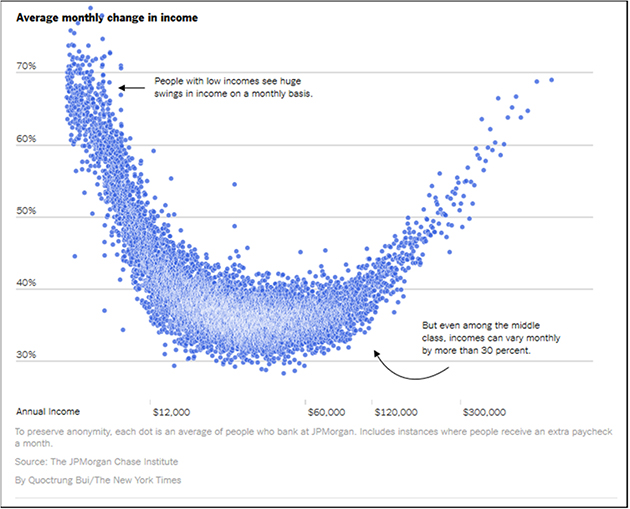 People on both ends of the income scale have similar variability but they don’t feel similar pain.

Wealthy people have savings and/or the ability to borrow if cash is low. For those on the lower end, an unexpected car repair or medical expense at the wrong time can be catastrophic.

Does any of this show up in the unemployment rate? No. People can be steadily “employed” but in terrible financial condition. And many are.

To the Fed’s Federal Open Market Committee, which meets this week, this sort of thing is not part of the mandate. The law charges them with maintaining full employment and price stability.

The problem here is that “full employment” doesn’t mean everyone is OK. It can and does coexist with widespread financial misery.

Nevertheless, Janet Yellen and the other members see the sub-5% unemployment rate as Mission Accomplished. It is their cue to stop promoting job creation and start fighting inflation. 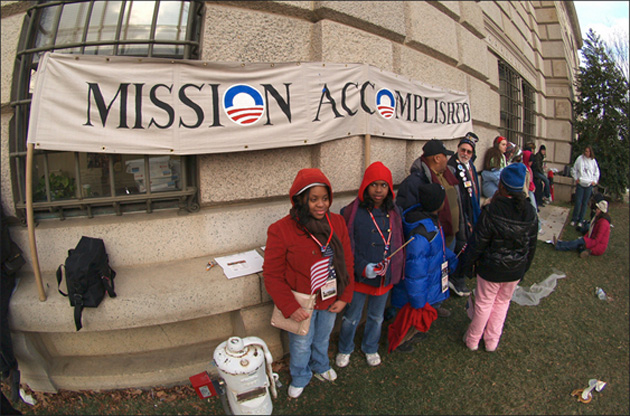 This is why the Fed is (slowly) lifting interest rates and planning to reduce its bloated bond portfolio. We might get more details tomorrow.

Predicting what the Fed will do is even harder than usual right now. The seven-member Board of Governors has three vacancies. President Trump hasn’t nominated anyone to fill them.

We could see five of seven seats change in the next year or less, and we don’t yet know who will get them. We also don’t know how quickly the Senate will confirm any new Fed governors.

Next year’s “dot plot” forecasts mean little when the key dot-makers are halfway out the door and their replacements may have entirely different ideas.

We are in a time of maximum monetary uncertainty. By this time next year, the Fed could be…

All those scenarios are completely plausible. Worse, they’re equally plausible. That makes it very hard to have a matching investment strategy.

So what do you do? 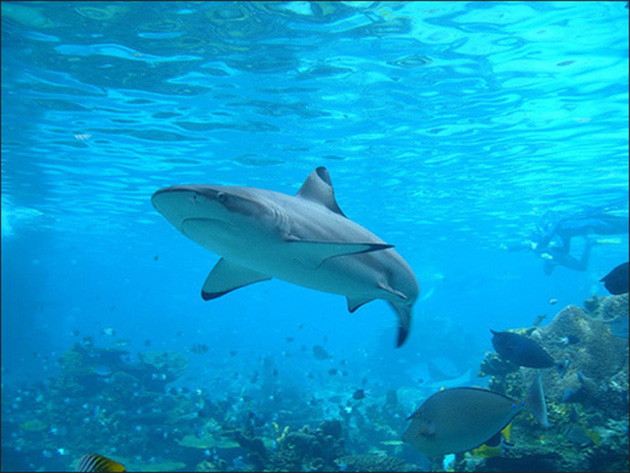 In Yield Shark, the premium service that I edit for Mauldin Economics, I’ve found investments that don’t depend on Fed policy. We have dividend-paying stocks from defensive sectors, floating-rate ETFs, business development companies, and other income-generating alternatives.

I’m also looking overseas, where the outlook is easier to discern. Last month I added a risk-managed emerging market ETF. I’m considering some European dividend stocks, too. Click here to see how you can get the newest Yield Shark issue.

This is a weird environment, and it’s tempting to just sit on your hands and wait. But if you do that, you may have to wait a long time. You might miss good opportunities, too. The best answer is to be ready for anything.

Obamacare only requires firms to provide health care if someone works at least 30 hours per week I believe.  Hence, many firms have reduced hours to part-time to advoid Obamacare.  This has contributed to the volatility of work hours.

On the other hand, workers themselves have much more unstable home lives, which often make it difficult for them to show up to work every day for 8 hours…so that adds volatility to work hours worked.

Yousay no inflation—-that’s not what my friends and I are living with. See Mauldin’s reference to the Chapwood Index, a way more accurate measure of what ordinary folk see day to day. I guess the job numbers are as bad as the government inflation numbers.

Far from being inflationary, QE and other monetary policies pursued by central banks have been deflationary in outcome. Volatility has been suppressed, the velocity of money has declined and economic growth has been subpar. In other words monetary policy has not worked or at least its impact has been vastly diminished and deteriorated in more recent years. Meanwhile extra government spending via borrowing has reached a point where its expenditure elasticity is negative.

So we need to change the rules of engagement and the narrative. This will be the first rate increase that may benefit savers with bank deposits. The last 3 were seen in money market funds’ rates but not at the banks. Incidentally there are relatively more such deposits than in previous cycles as Schwab and TD Ameritrade, for instance,  switched their clients’ accounts to deposits from funds during QE in order not to have to subsidize their money market vehicles.

What if the Fed or the administration or anyone who is listened to (e.g. John Mauldin) were to change the narrative and say they were raising interest rates and were going to continue to do so because it was time to give savers, life insurers, municipalities and public pension funds a break. They could say “Unless we do this we will be facing a huge unrecognized crisis of unmet promises before very much longer if we are not already doing so today”. Borrowers no longer need to be subsidized after 8 years of support. Income differentials have become intolerable.

We recognize that our policies have indirectly fostered that divide so we want to change them. We intend to no longer reinvest any proceeds from redemptions of mortgages or government bonds from September and will start selling some of our holdings from the new year. We expect these actions to help to raise yields so they reach a normalized level and offer savers a better return. We believe that there is very unlikely to be any insufficiency of demand for fixed income paper once yields are normalized.

We hope these actions may ease the concerns of all those who have had their incomes squeezed by the lack of return on their savings and encourage them to believe that we can now emerge from the bleak conditions of the last few years and they can look forward to a more secure and prosperous future. We hope also that this may increase the velocity of money and thereby economic activity.