It seems that a lot of people have missed that distinction between wishful thinking and reality lately—and I fear it’s going to hurt them badly. 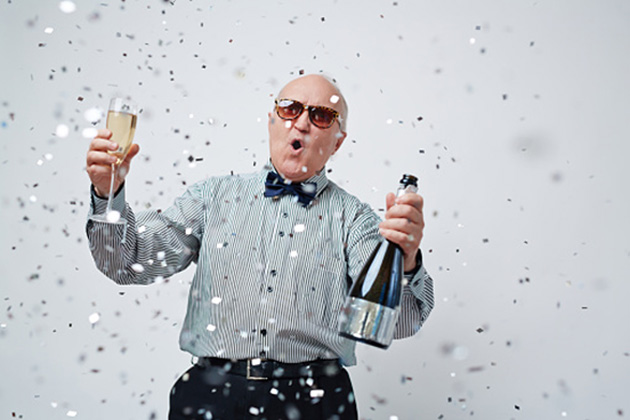 After Donald Trump won in November, some Americans didn’t just hope for the best; they thought it was here.

The euphoria is visible in the Small Business Optimism Index, which is published by the National Federation of Independent Business. 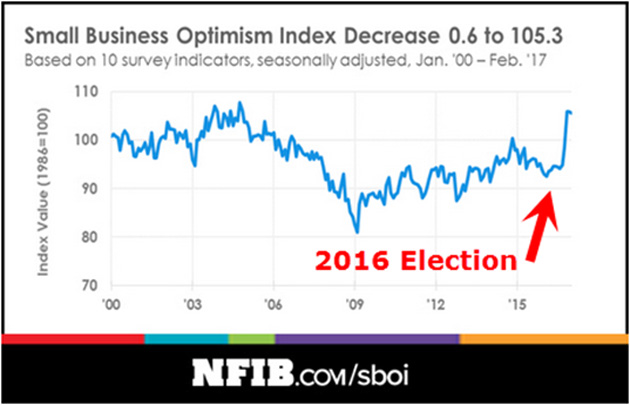 While that was a reasonable conclusion, now it looks like small-business owners may have let their political excitement affect their common sense.

The jury isn’t in yet on how massive the changes are going to be. And the NFIB index hasn’t pulled back much, so respondents seem to be patient so far.

You could say the same for investors. Stock benchmarks rose after the election, particularly in regulated sectors like banking and energy, because investors believed policy changes would lead to higher earnings.

I was less confident, and said so in my December Yield Shark letter.

Can Trump and the Republican-controlled Congress do anything to justify this kind of shift? I don’t think so. Yes, we’ll get some tax cuts and deregulation. They might trim government spending here and there. But they can’t possibly do as much as some people expect for 2017.

The Senate will spend weeks, possibly months confirming Trump’s cabinet appointees and a Supreme Court justice. The House will have to come up with the “replace” side of its “repeal and replace Obamacare” pledge.

Add in Democratic delay tactics and heavy lobbying from opposing interest groups, as well as resistant state and local officials and court challenges, and I see little chance that Trump will deliver all or even most of his agenda as fast as people expect.

So, I think stock bulls should curb their enthusiasm—otherwise, they will get a rude awakening at some point next year.

I’m still convinced that’s true—and the “rude awakening” may be even closer now. 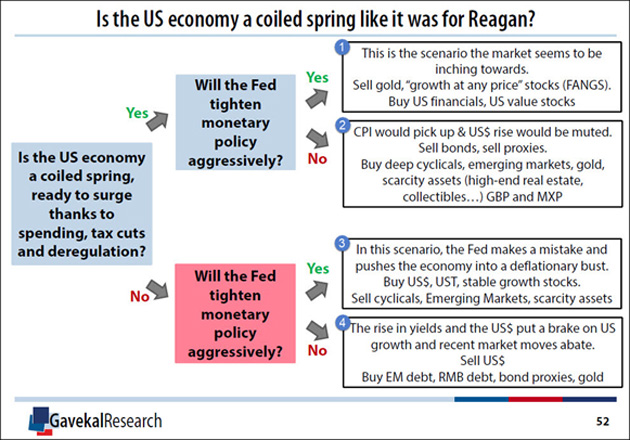 Answering two questions leads you to one of four scenarios, each with a different investment strategy.

Let’s think about these in order.

If the US economy is a coiled spring ready to surge, it has a strange way of showing it. Even the most optimistic projections show real GDP growth for 2017 will be little better than last year’s disappointing 1.6%.

I think our economy is the opposite of a coiled spring.

It’s been stretched past its limits by debt. Aside from insane federal, state and local government debt, we owe trillions more in credit card, auto, student loan, and mortgage loans. That stands in the way of any meaningful expansion.

But let’s suppose for the sake of argument the economy really wants to grow, and all it needs is a little nudge from the government. Are those policy changes right around the corner? I don’t think so. 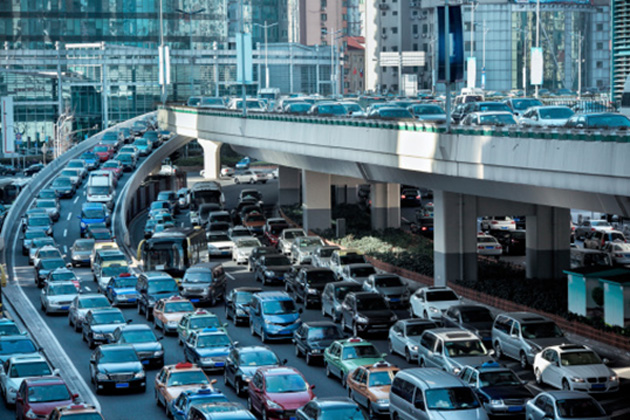 The Trump administration’s first 100 days are running out, and we have yet to see any major legislation pass.

The Obamacare repeal/replace plan is still on the table but not doing well. The GOP is divided at least three ways. Compromises that would bring more conservatives aboard repel the moderates—and vice versa.

Furthermore, the healthcare reform bill wasn’t just healthcare. It would have eliminated the Obamacare taxes on higher-income Americans… and its Medicaid cuts were going to offset lower corporate tax rates in other legislation. Now that’s much harder.

Bank deregulation? That’s going nowhere. We hear talk about amending the Dodd-Frank Act, but nothing concrete is happening.

Worse, the Trump administration still hasn’t gained control of key regulatory agencies. As of now, the Securities and Exchange Commission (SEC) only has two commissioners. One is a Democrat. The Commodity Futures Trading Commission (CFTC) is similarly split.

New chairs for both agencies are pending in the Senate. But even after they’re confirmed, the Democratic commissioners can stop any reforms cold simply by boycotting the meetings, thereby preventing a quorum.

That would be easy to fix, though: the president could simply nominate more commissioners and then outvote the Democrats.

I don’t know why he hasn’t. Maybe he has other priorities. Maybe no one wants those jobs (I sure wouldn’t). The Federal Reserve Board has no nominees for its three open slots either.

Banks can’t count on much administrative relief until the president gets his people in control of the regulatory agencies—and that’s nowhere on the radar right now.

Infrastructure stimulus? It’s bogged down in a debate how to pay for it. Last week, Trump told the New York Times he would consider borrowing “much more” than $300 billion for infrastructure projects.

You can imagine how GOP deficit hawks loved that idea. It won’t mesh well with their desire to cut tax rates without adding more debt.

Trump has talked about making deals with Democrats if he can’t get enough Republican votes to pass his bills. But Democrats have little reason to cooperate. Their base voters are energized against Trump and won’t stand for it.

Instead of a unified Republican government, we have near-total gridlock.

I think the answer to our first question, “Does the US economy have pent-up growth potential that a Trump presidency can unlock?” is clearly “no.” Scratch Louis Gave’s scenarios 1 and 2 off the list.

As for the Fed… 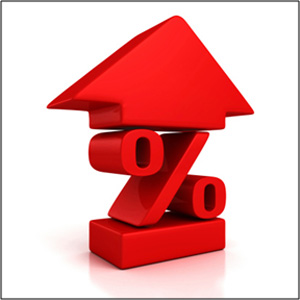 The Fed Tightens the Screws

The policy-setting Federal Open Market Committee (FOMC) spent last year building up its nerve for more rate hikes. It gave us one in December and another in March, and more are coming.

The Fed is clearly on a tightening path, but is it “aggressively” so? That’s not as clear.

We saw in the March dot plots that even the most hawkish FOMC member thinks the longer-term federal funds rate will only rise to 3.75%. Other estimates came in at 3% or lower. That’s “tight” only compared to years of near-zero rates.

Of course, 3% rates might feel tight to a generation of Millennial traders who have never seen anything like it before.

But that’s not all.

The March FOMC minutes, released last week, showed the Fed is seriously considering how it will unload its bloated bond portfolio. They could start letting assets roll off without replacement later this year, which could have more impact than rate hikes.

Looking back at the decision tree, I think the No/Yes path is the most likely. The economy isn’t ready to surge, but the Fed will tighten policy anyway. Not a good combination, but I’m in the minority.

Most investors still have their bets on Yes/Yes. Some are starting to get nervous. Given events in Washington, they should be.

I am sorry to be the bearer of bad news, but here’s reality as I see it.

It doesn’t matter if we’d like this to happen. It is what’s coming, in my opinion.

I haven’t even mentioned other flash points: a potential government shutdown after April 28, more military action overseas, or trade conflicts with China and other countries.

I also haven’t mentioned the assorted Russia-related investigations. Whatever happened in the election, the fallout is distracting both the White House and Congress.

I’ve thought about what could possibly change all this for the better. Nothing comes to mind.

Recent reports suggest Trump wants to shake up his White House team. That may help, but he’s already lost of lot of time and political capital. 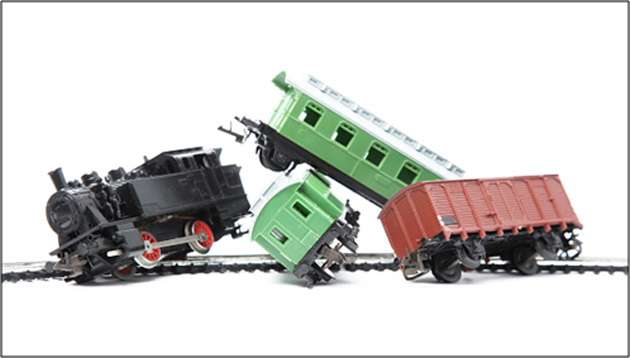 To me, this situation feels like a slow-motion train wreck where all you can do is watch.

Much depends on the 1Q earnings reports that start flowing this week. Good results from high-profile companies might buy a little more time. Unexpectedly bad results from big names could put on the brakes.

Washington’s monumental gridlock is on a collision course with investors’ blind euphoria. We’re all on one train or the other. Hold on tight.

P.S. Louis Gave will be speaking at our Mauldin Economics Strategic Investment Conference in Orlando, May 22–25. We’ll see if he updates his outlook. If you join us at the SIC, one of the most popular investment conferences in the US, you’ll also meet high-profile investor Marc Faber… The Fourth Turning author Neil Howe… global macro investor Raoul Pal… and over 20 more well-known speakers. Click here to learn more.

I think you are wrong about one point. I think the Fed is tightening not because they think the economy is overheating but because they want room to cut rates when the next recession arrives.