Did the recent 10% drop in the stock market bother you? Let me take a wild guess: it’s because you have money in stocks. No one likes seeing their net worth decline.

You might feel comforted that we’re all in this together. Don’t be… because we’re not. Roughly half of all American households don’t own stocks.

Hence, it’s a mistake to think the stock market’s health says much about the nation’s economic health. The nation is its people, and many had little to celebrate even before the stock market dropped.

Investors ignore that fact at their own peril. 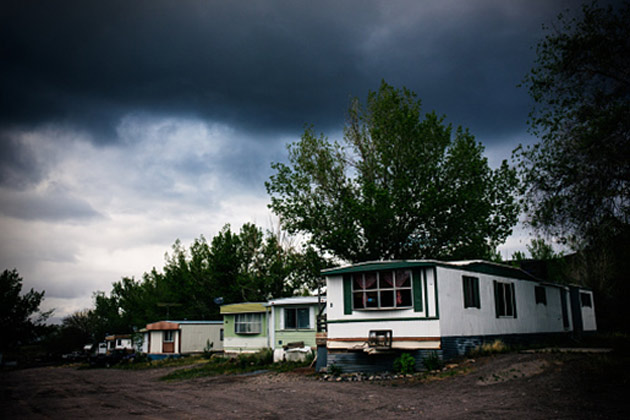 So who does own stocks? It’s a surprisingly tricky question, since we have so many ownership structures and pooled investment vehicles. You have to drill through the layers to find the ultimate owners.

The first surprise: A big slice of the US stock market isn’t American at all. Foreigners own about 35% of US stocks by value—and their ownership grew considerably over the last few decades. 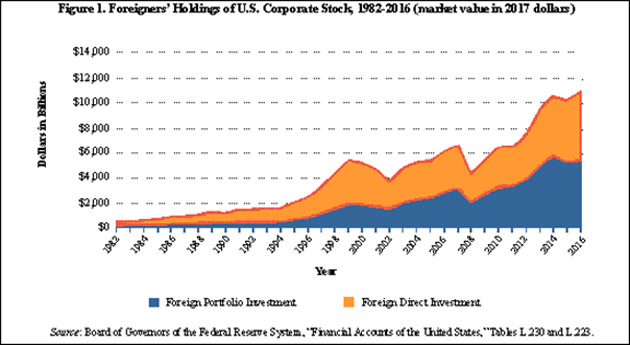 Some of these foreign shareholders are wealthy individuals, others are corporations or investment funds. They own far more of our stock market than ordinary Americans do.

About half of US households have zero exposure to the stock market: no stocks, no mutual funds, no 401(k), no IRA, nothing.

According to research by New York University economist Edward Wolff, some 84% of the stocks owned by Americans belong to the wealthiest 10% of households.

Subtract that 10%, and subtract the 50% who own no stocks, the remaining 40% of Americans split about 15% of the stock market. For many, their investment is negligible—maybe a few hundred dollars in an old 401(k). Others have a big part of their net worth tied up in stocks. Maybe you’re in that group.

But a solid majority of the American population feels no direct impact from stock market performance.

The inverse is different. Long-term stock market performance depends heavily on the US population’s economic health. Stocks are businesses that need customers, so how are the customers doing?

The latest data do indeed show average wages up slightly. But as we’ve seen, “average” is not the same as “everybody.” My friend Michael Lebowitz published some good charts on this and other consumer issues last week.

The government’s average wage growth numbers include both workers and supervisors. Looking at them separately shows a whole different picture since the last recession. 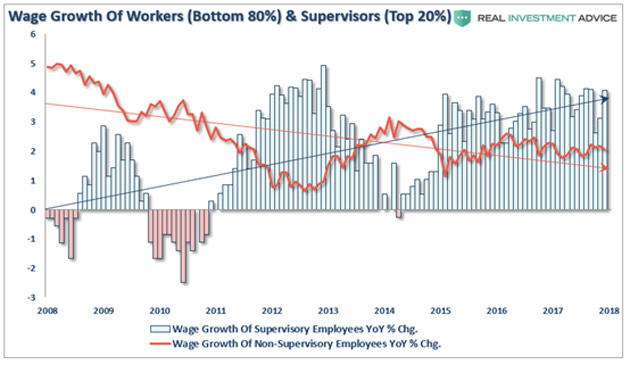 Since 2008, average wage growth for workers, some 80% of the total, has trended lower even as supervisor wage growth trended higher.

That means rising wages haven’t been evenly distributed. The top one-fifth are getting almost all the wage growth while the bottom four-fifths see flat or declining wage growth.

If your business plan depends on more consumers having more money to spend, this is a problem. Yes, some consumers are enjoying wage growth, but most are not.

Where else might people draw spending money? They can take it out of savings if they have any. But that’s getting harder too. 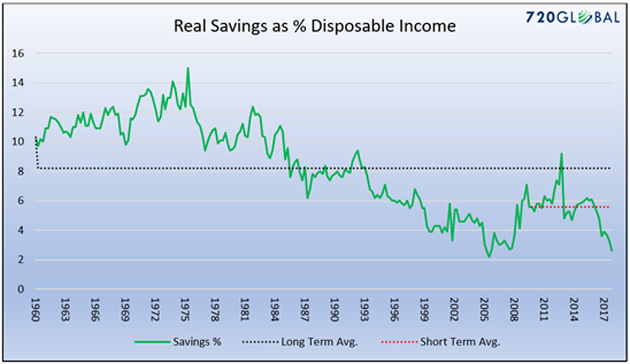 Inflation-adjusted savings as a percentage of disposable income have been dropping since the 1970s. They bounced in the last recession but fell again after it ended. Now savings are near an all-time 2% low.

If you can’t increase your spending with higher wages or pull cash out of savings, the only other option is debt. That usually means credit cards. Here, we finally see some growth. 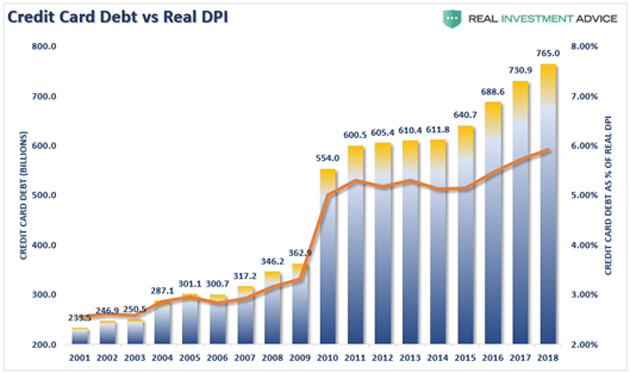 Comparing that debt to the average disposable personal income, we find the typical American carries credit card balances equal to about 6% of DPI. That number jumped sharply in the last recession but never came back down. It’s kept growing, although at a slower rate.

So the average American’s credit card balance, as a percentage of disposable income, is more than twice as much as his or her savings.

Combined with flat or declining wage growth for most workers, does this look like a population poised to go on a spending spree? I don’t think so.

And it doesn’t seem all that positive for most stocks. 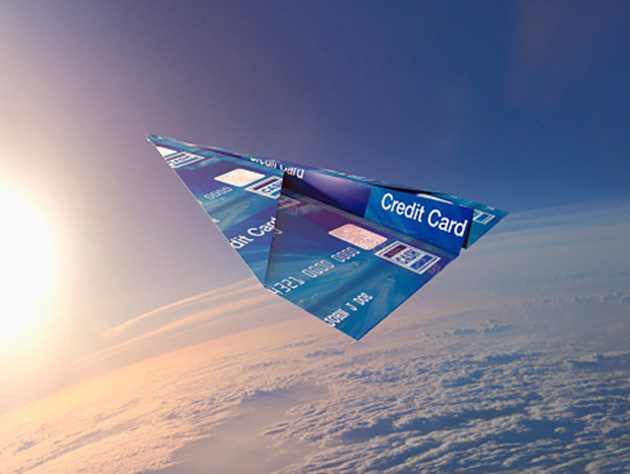 We’ve seen tremendous stock market growth in the last decade, but consumer income growth has been much less impressive. Can this continue?

For a while, yes. Just look at China, where a booming stock market has coexisted with a vast, impoverished interior for years.

But even China probably can’t do it indefinitely. On a long enough time horizon, a nation’s stock market reflects its consumer economy. Production and consumption must balance.

The US stock market has grown faster than the economy, by a wide margin. That can’t go on forever. The scale will correct at some point—probably by swinging the other way, with the economy growing faster than stocks for an extended time. That part of the cycle won’t be fun for stock investors.

Are we there yet?

No one knows… but it’s fair to say we are getting closer.

Before I go, I want to mention the current issue of Macro Growth & Income Alert because it sort of ties in with what I just talked about. In it, my colleague Robert Ross and I are discussing a phenomenon related to the Great Recession. The Millennials, many of whom came of age in that period of economic scarcity, have been negatively affecting a certain sector due to their cautious approach.

But that trend is now reversing, and we’re right in there with a recommendation of a company that has maximum exposure to the Millennial market in its sector. I suggest you give our service a risk-free try. You have 90 days to see if it’s right for you—if not, simply cancel and get all your money back.

Patrick,
I enjoy your writing,so don’t take this as negative about the past.  Instead, you have set yourself a new bar for the future.  Super article!  Well done!
Bob

Good article.  This subject is explored in more depth at

Most of the economic inputs are cyclic in nature.  We had the Baby Boomers ramp up the economy and now the Millennials working through the system and behind them is the next generation which is even larger than the Boomers.  Any time you look at economic trends, you have to look at demographics also.  It is quite likely that the economy will be booming in 15-20 years, despite robots and automation and power hungry politicians.  You are right in that the fortunes of the stock market really only affect the top 20% in this country.  While over half of America struggles with lower wages and increased debt, they still have it better than billions of people elsewhere on the planet.