According to the Bureau of Labor Statistics (BLS), the US economy is at full employment, or close to it. Yet it doesn’t feel that way for many Americans. Even if you have a secure job, you probably know people who don’t.

On the other hand, many small-business owners and HR people complain that they have trouble finding qualified workers—and that’s true for well-paid, low-skill jobs too.

My theory: it’s all about geography. 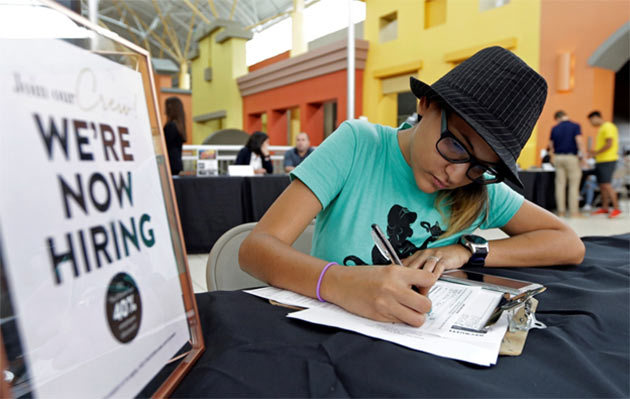 In September, the US unemployment rate dropped to 4.2%. That number got overshadowed by a more disturbing 33,000-person drop in total employment, due to Hurricanes Harvey and Irma.

But 4.2% unemployment is about as low as we’ve seen in recent history. Here’s a chart showing the monthly jobless rate since 1970.

Unemployment dropped almost to the current level in 2007 and went slightly below it in 2000. In both cases, a recession began soon afterward, as you see in the gray shaded areas.

Graphs and percentages are good for illustration, but there are people inside them, so let’s talk about the raw numbers for a minute.

In September—the same month we had 4.2% national unemployment—the US had 6.8 million unemployed people. Of those, 1.7 million had been unemployed for 27 weeks or longer.

An additional 5.1 million Americans were working “part-time for economic reasons.” In other words, they couldn’t find the full-time job they wanted, so they were forced to work part-time.

Add to that the 1.6 million “marginally attached” workers who were available to work, but hadn’t actively looked for a job in the last four weeks.

That means 13.5 million Americans were in some kind of employment distress last month.

And that doesn’t even include the millions who have simply dropped out of the labor force—and millions more who are employed at far lower wages than before the recession.

All this is happening at the same time the job market is booming.

How can that be?

Part of the problem: our 4.2% national unemployment rate disguises a lot of regional variation.

Fortunately, the BLS collects data down to the county level, which gives us a more detailed picture. 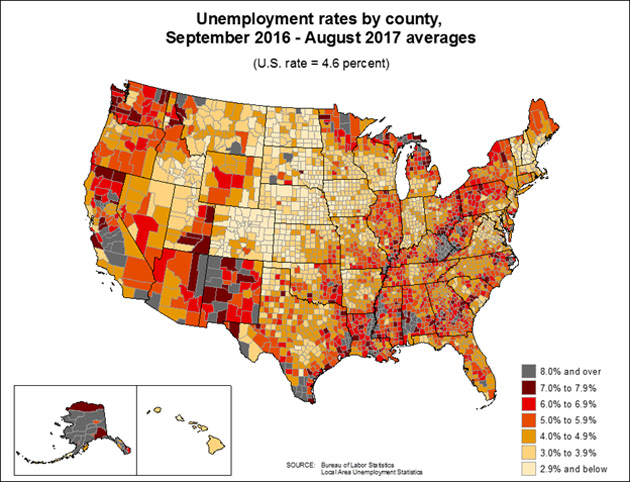 The map shows the average unemployment rate for the past 12 months, which helps smooth out short-term factors like the hurricanes.

The gray and maroon areas have the highest unemployment rates—7% or more. You see the affected regions: parts of the Deep South, Appalachia, the upper Midwest, the desert Southwest, Alaska, and inland California, to name a few.

Conversely, the lowest unemployment is in the Great Plains, parts of New England, and the Washington DC area.

Now, here’s a different view from the BLS, using August data for the metropolitan areas, the most populated parts of the national map. Unemployment in the yellow areas is lower than average. Red areas have above-average unemployment. 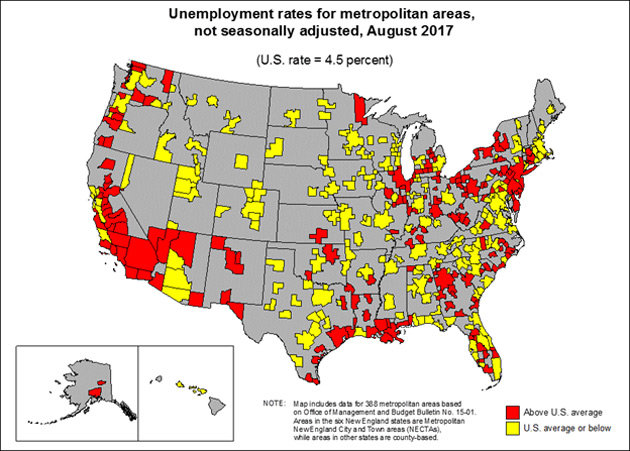 So, the solution is clear. Unemployed people in the red places should just move to the yellow places. Problem solved.

Except, it’s not that simple.

Some jobs require proximity to a certain location, others don’t.

I sit in my home office and write about economics. I could do this from almost anywhere.

Not everyone has that advantage. Factory workers have to live near the factory. Nurses must be near the hospital, waiters near the restaurant.

“Knowledge” workers tend to have more geographic flexibility but often cluster together anyway. So, we end up with places like lower Manhattan and Silicon Valley, filled with high-paid workers who can afford the best of everything. This drives up housing and food prices, and the general cost of living.

Contrast them with older industrial areas whose economies haven’t kept up with recent changes: Chicago, Houston, New Orleans, Atlanta, Philadelphia. They all have above-average unemployment.

Those are just metro areas. We also have an urban/rural divide.  Think of places like rural West Virginia and Ohio, which lost their factory and mining jobs with nothing to replace them.

This shows up in the stats. Here’s a look at job growth since 2008 in metropolitan vs. rural areas. 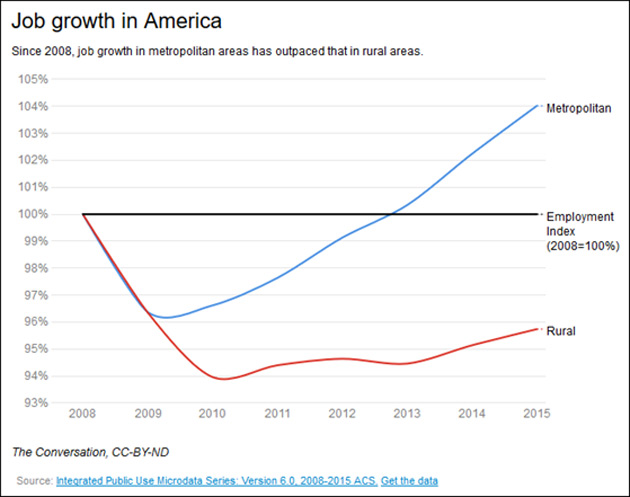 A stark difference. In terms of job growth, some (not all) metro areas recovered from the recession—rural areas often haven’t.

Meanwhile, all kinds of service and retail jobs go unfilled in the tech hubs because the people who would fill them can’t afford to live there.

Even if they could somehow afford it, moving isn’t easy.

If you own a home, can you sell it for enough to pay off the note?

Or maybe only one spouse is unemployed. Should the employed one quit so they can move and potentially end up in a strange place with both partners out of work?

What if you’re the caregiver for older relatives? You can’t leave them behind, but bringing them with you might be expensive and risky to their health.

If you have children, what are schools like in the places where jobs are plentiful? Is affordable child care available?

“They should just move” is easy to say when you’re a well-off financial or technology worker. But it’s often not a feasible answer for those actually facing the situation.

So, those people stay where they are and make the best of it. Frequently, it’s still better than the alternatives.

This is the kind of thing traders and economists often miss. Human beings aren’t interchangeable parts you can just slide around a map.

So what’s the answer? I wish I had one. This is a thorny problem.

I’ve seen some reports that Millennials are moving from city centers out to suburbs as their children reach school age. That may help rebalance job demand and housing costs. But it will happen slowly, if at all.

Economic transitions are always painful and frustrating. We’re in a big one right now, and I think it’s only getting started.

These maps are wonderful. The geographic factors that separate areas of high and low employment are not mountains, rivers, deserts, valleys, fertile soil, access to water, good transportation, or extremes of weather. They are state boundaries. In many cases the maps show sharp and abrupt changes in prosperity right at the state line. Economies seem to rise or fall based not upon truly geographic factors, but rather upon the laws that govern people’s transactions. Why am I not surprised that some systems of encouraging and regulating economic behavior work better than others? This illustrates the wisdom of federalism, does it not?

There are some “fixes,” some of which involve government.

Government needs to do a much better job of matching immigrants to skills needed. Many of those workers in areas of high unemployment are blue collar workers, the same skill set as many of the immigrants. Stopping blue collar immigration, possibly for as long as 10 years (maybe 20) will work towards rebalancing the workforce. Blue collar workers will be motivated to move by the increasing wages in areas needing their skill set.

We have been allowing unlimited numbers of blue collar immigrants by winking at the illegals and chain-migration. Fixing unemployment will REQUIRE fixing/eliminating blue-collar immigration.

This will have the added benefit of narrowing the wage gap.

Really, markets work when we don’t pervert them.

The second map has another important insight: most metro areas that are also state capitals are showing below-average unemployment.

That may indicate a lack of economic breadth across business sectors as well as geographic lines.

Combination with unemployed person’s age would be very interesting.  Young people move and older people don’t move as easily or as often.