If you think economics is boring, bring up “free trade” and see what happens. I guarantee sparks will fly.

Lately, this has become more than a theoretical argument.

President Trump came into office pledging to renegotiate or cancel trade agreements he thought unfair to the US. Meanwhile, the UK seems headed toward a “hard Brexit” from the European Union.

Whether you think those are good moves or not, they’re important to the world economy. Millions of jobs and lives are at stake.

I think both sides are wrong… and it’s going to cause big trouble. 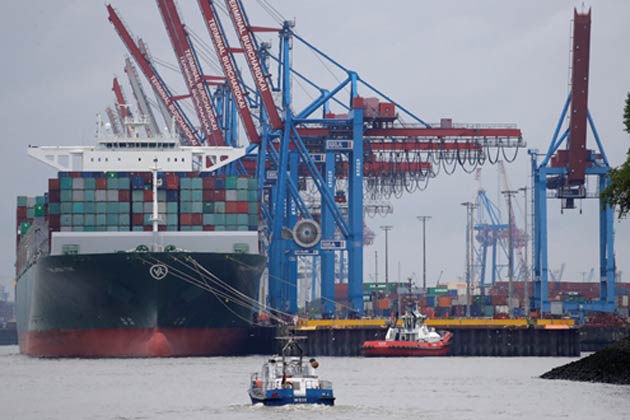 Free Trade Is Anything But Free

Rational discussion is impossible if you can’t agree on definitions. So what is free trade, anyway? Here’s how Investopedia defines it:

Free trade is the economic policy of not discriminating against imports from and exports to foreign jurisdictions. Buyers and sellers from separate economies may voluntarily trade without the domestic government applying tariffs, quotas, subsidies or prohibitions on their goods and services. Free trade is the opposite of trade protectionism or economic isolationism.

By that definition, free trade exists almost nowhere on Earth. Even so-called free-trade zones like NAFTA aren’t free. They have extensive rules defining how the parties can discriminate. It’s managed trade, not free trade.

I think if we actually had free trade, it just might work.

19th-century economist David Ricardo said countries are better off if they focus on producing goods in which they have “comparative advantage.” This maximizes prosperity for everyone.

The closest thing we have is interstate trade within the US. It works pretty well, thanks in part to having a single currency and fiscal policy. Take those away, and the US would look more like the European Union.

Barring a one-world government, international trade will always have some degree of protectionism. But last week, someone in the Trump White House decided to turn it up a notch. 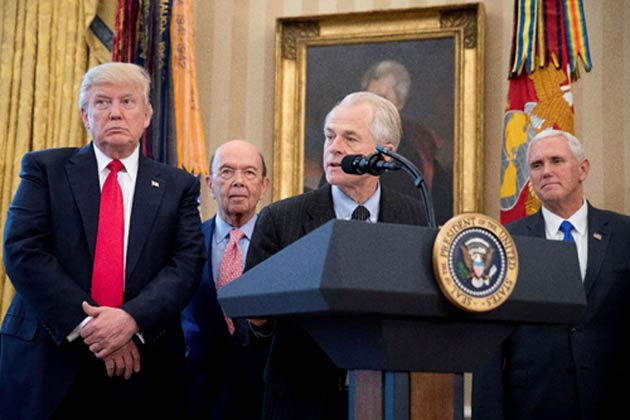 Peter Navarro is an economist who directs the White House Office of Trade and Manufacturing Policy. He’s a hardline protectionist, especially towards China. 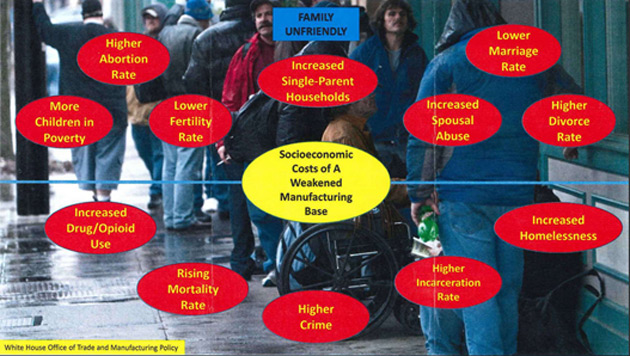 In Navarro’s view, insufficiently protectionist trade policies weakened the US manufacturing base. He thinks this created other socioeconomic costs—from domestic violence to lower fertility rates—all springing from the same root cause.

The Twitterati roared with bipartisan laughter at Navarro’s slides. What a crazy idea to think that closing factories could change fertility rates!

I have to confess, that was my first reaction too. But as I thought more about it, I realized that Navarro has a point here... and an important one. 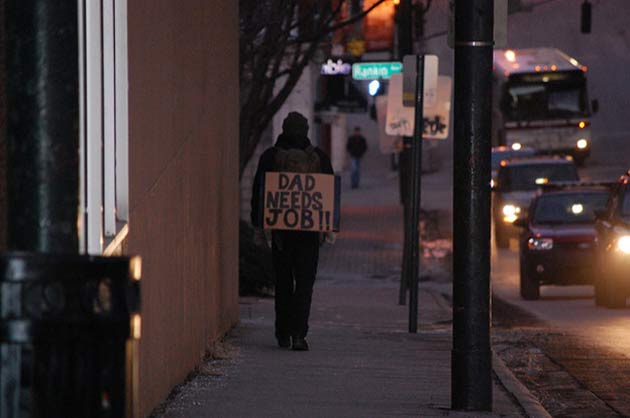 Losing your job is no fun, particularly when you have no savings and no good prospects for a new job. That describes a lot of US manufacturing workers in the last decade or two.

What happens inside those households after the ax drops?

Well, with no income they start falling behind on bills. Government benefits help, but they still don’t replace what was once there.

That leads to arguments between spouses. Kids hear it, get scared, and vent their fear by misbehaving at school.

The stress that comes from trying to find a new job—or from working three “McJobs” to make ends meet—can create a tense atmosphere. Then the car breaks down, or somebody gets sick, and it gets even worse. People turn to drugs, have affairs, commit crimes. Bill collectors start calling. Teens make bad choices.

None of this is imaginary. It happens all the time.

Yes, people bring some of this on themselves. But it still originates from that initial job loss, which was a consequence of national trade policies.

Other economists have reported similar findings. For instance, see “The China Trade Shock” by David Autor, David Dorn, and Gordon Hanson. They don’t endorse Navarro, to my knowledge, but their research supports some of his points.

Peter Navarro may not have all the right answers, but he’s not wrong about these socioeconomic problems.

They happen, they hurt people, and trade policy is one of the causes. 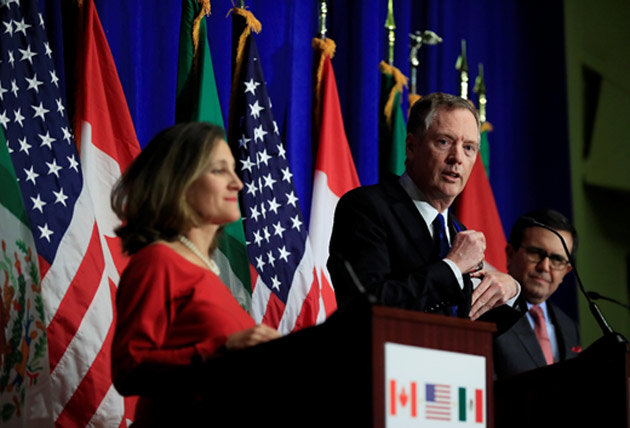 As I said, people fall in two camps about trade.

Specific policy preferences flow out of those beliefs. On the surface, they look irreconcilable, but I think both are correct.

And yes, free trade is unfair and causes a lot of problems.

This isn’t an either/or condition. Both can happen as the process unfolds over time.

It’s true the people who get hurt by foreign competition might eventually find new and better opportunities, but that “eventually” period is painful. All those problems Navarro listed can linger a long time.

Even if everyone who lost their job finds a better job a year later, the scars from that year don’t disappear. Marriages break up, kids learn bad habits, communities fall apart.

Those who sing free trade’s praises tend to overlook this. Economic growth will fix everything, they think. Just wait.

For them, the waiting is easy. Not so for everyone.

Until that problem gets fixed, anything called “free trade” won’t get very far. Free-traders will be lucky not to go backward. President Trump already ended US participation in the nascent Trans-Pacific Partnership (TPP). He may well pull the US out of NAFTA too.

Fierce opposition from business leaders has kept Trump and Navarro from moving as fast as they want, but I don’t think they will give up. The trade barriers that exist now will stay in place, and new ones are probably coming.

That will affect stock markets all over the world, but not equally. In my Yield Shark newsletter for conservative investors, I’ve been looking for companies that can deliver steady income even as protectionist policies spread. I suggest you do the same.

The walls are rising. Make sure you’re on the right side.

There’s free trade, then there is fair trade. Then there is a consideration why at all you would want to have a long term deficit trade with a communist country- China?  Seems our political elite sold us out all in the name of exploiting cheap labor. China had the cheapest labor and the more than any other country.  We traded our middle class standard of living away to give economic power to them…crazy. Globalists would argue that we have benefitted immensely by having lower cost goods.  I would argue that in so doing we have settled for lower quality.  Seems like we send China our dollars and in return we get blow up swimming pools and other plastic nick-nacks that all end up in our landfill in about 2 weeks. Why is Washington referred to as a swamp? We vote for them and they sell us out for money.

A fine article. The net benefit of free trade for American society as a whole is real and significant.

But there’s that catch: “net.” That implies there are benefits and costs. The benefits are large and diffuse. The costs are smaller, but still significant, and more concentrated in certain parts of the country and among certain classes. That’s what Navarro et al. are talking about. After NAFTA and the accession of China to the WTO, we never did much to help the displaced. And we artificially divide up “social problems” from “moral decay” from “economic distress.” In real life, these are almost always tangled together.

Of course, automation and the general movement toward more and more efficient organization of work have cost far more low- and moderately-skilled jobs than has foreign trade. The supposed panacea for that was for everyone to go heavily into debt to attend college. See how that worked out.

This issue is relatively simple to understand and somehow the key is passed in comments or the article.  The most important part of any business is the customer.  If there are no people with enough money to buy an iPhone in the US, Apple falls.  Saving costs in China is a long term loser because most people there are worried about rice not phone service.  They can never earn enough to buy a phone.  If the phone was produced here at a lower margin,  the customer base could expand and make up the funds lost by higher wages by higher volume.  Not to mention the social spending loss by the government for people laid off and the tax garbage leaving profits overseas.

One item missing from the discussion is Government subsidy of certain products for export.
The Quebec financing of Bombardier comes to mind.  This allows exports to be sold at less than market price.

I guess my point is free trade is more or less theoretically impossible, as someone needs to monitor subsidies, and provide enforcement if found.  Finding subsidies could be tough, as even defining them is difficult (e.g. are tax breaks to manufacturing a subsidy?  “Free” infrastructure? etc.)

In the US states offer $$ for companies to locate in their state, is that a violation of free trade?