The US economy is at “full employment,” says the official 3.9% unemployment rate. Every educated person who wants to work has at least one job. Some of us have several.

But hearing economists talk, the bigger problem is that fully employed people haven’t seen  enough wage growth. It’s a puzzle. Wages used to rise faster when unemployment was this low.

Hence, there was much celebration when the August jobs report showed a 2.8% annual increase in average hourly earnings for “Production and Nonsupervisory Employees,” i.e., regular workers. Numerous news articles reported it was the fastest wage growth since 2009.

That was correct in a narrow, technical sense. But not in real life. 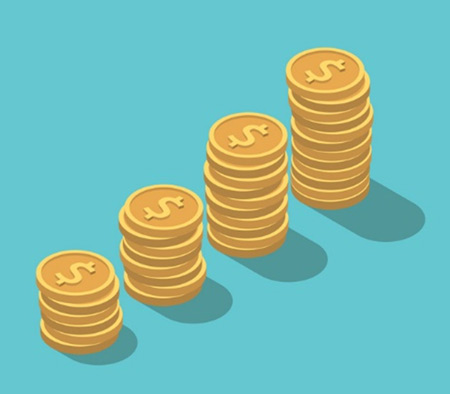 Aside from the monthly employment report, the Bureau of Labor Statistics also compiles the Consumer Price Index, our primary inflation gauge.

For the 12 months ending August 2018—the same period in which average hourly earnings rose 2.8%—the CPI for All Urban Consumers (CPI-U) rose 2.7%. That’s how much the cost of living went up, on average.

(Your mileage may vary, of course, depending how you spent your money. But unless you had no housing or transportation expenses in the last year, your cost of living probably rose at least  2.7%, and possibly much more.)

That being the case, a 2.8% wage gain is essentially no gain at all. Inflation-adjusted wages are flat since last year. It is certainly not the fastest wage growth since 2009, or even close.

But that’s not what you read in the news. They showed you charts like this one, which doesn’t adjust for inflation (larger version here). 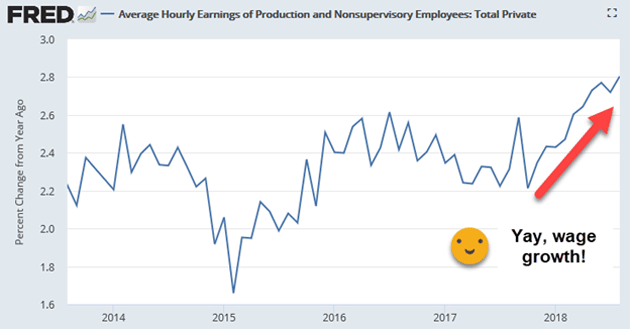 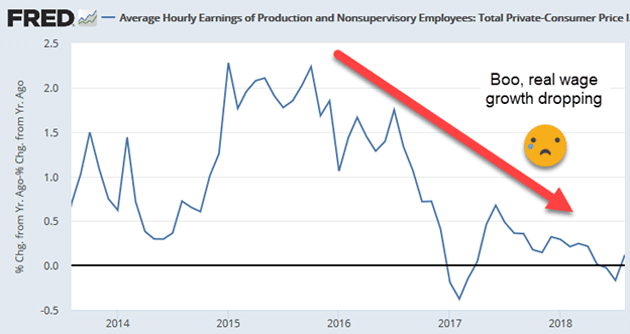 Quite a different picture. We see that real wage growth peaked in 2015 and is, except for a brief pop in early 2017, still trending down. It’s been approximately zero in recent months.

The best you can say here is, “It could be worse.” At least real wages aren’t dropping hard, as they did in the recession years. That’s nice, but it hardly justifies all the positive spin.

Economists and journalists know about inflation. They routinely report Gross Domestic Product growth in real terms, for instance. But not wage growth. For that, they assume inflation doesn’t matter.

But it matters a lot. Workers whose earnings don’t keep up with inflation find themselves falling behind. Eventually, they notice the problem and look for someone to blame. Hence, our current social and political discord.

One more chart. This is average hourly earnings minus CPI-U, same as the sad-face chart above, but this time going back to 1965 (larger version here). 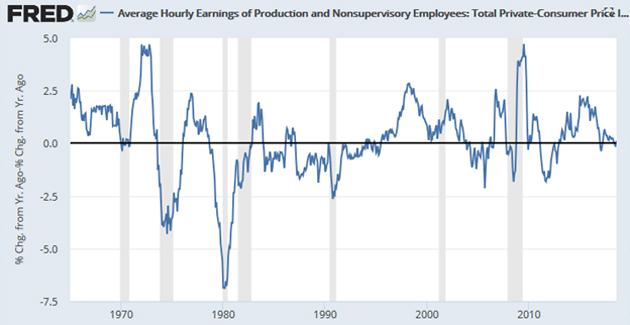 Again, this shows the inflation-adjusted percentage change in average hourly earnings for the last 12 months. When the blue line is below zero—as it was for long periods—real wages were actually dropping instead of growing.

On the positive side, there were a couple of times when real annual wage growth approached 5%... but only a couple, and they didn’t last long.

I was in high school at the time. On Election Day that year, I remember seeing people lined up for hours to sweep out Jimmy Carter. Other things were happening too, but voters blamed him for the sharp wage drop you see in this chart. Not to mention the 7.5% unemployment rate that November.

Thankfully, we are nowhere near that point now. But neither are we in the best of times.

Real wages are flat and trending the wrong way. Yet we are told by politicians from the president on down—and by experts who should know better—that workers should celebrate their good fortune.

What’s really happened is a redefinition of “good fortune.” Simply having a steady paycheck now means you should count yourself lucky. 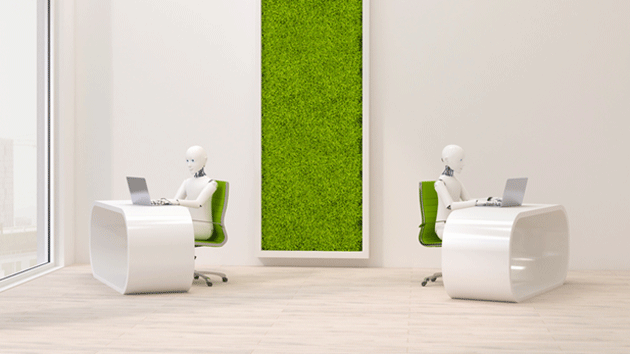 Labor isn’t scarce in the growing number of occupations that can be automated. Supply is abundant if you include the machines.

I think this helps explain the wage puzzle. Low-wage workers don’t ask for more because they are (correctly) afraid of being replaced, and employers have little incentive to raise wages for those workers.

This probably won’t end well. As automation technology improves, millions of people will get steadily poorer and unhappier, and millions more will join them.

(I say “them” instead of “us” in hopes I won’t be in there too. But none of us should assume we’re safe.)

If we’re lucky, the mass un- and underemployed will peacefully line up to force changes like those I watched in 1980.

I doubt we’ll be that lucky.