Remember when “jobs, jobs, jobs” was a political talking point? You don’t hear that so much now, maybe because most every voter who wants a job has one. The Labor Department’s broadest unemployment benchmark is at its lowest level since 1994.

Many employers grew their companies and careers in a time when the US had more workers than jobs openings. Math gave management the bargaining power for decades. Now it doesn’t.

In this new equation workers don’t compete for jobs; employers compete for workers. Some who made fortunes under the old math aren’t adapting well.

Home Depot (HD) co-founder Bernie Marcus (who is no longer associated with the company) made headlines last month when he said, “Nobody works, nobody gives a damn… I’m too lazy, I’m too fat, I’m too stupid.”

Mr. Marcus, now age 93, may have been a business leader in his time but he’s wrong about today’s workers. We have data to prove it. 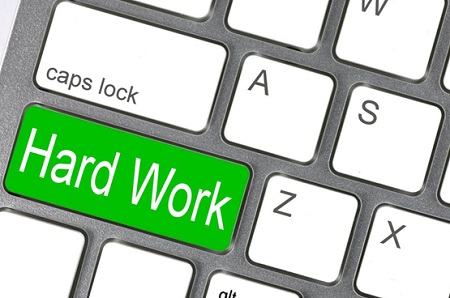 The Opposite of Lazy

I saw that Bernie Marcus quote in The Wall Street Journal, leading an article which began “Where have all the go-getters gone?” It featured employers decrying what they consider a lost passion for work.

Beneath the headline, though, what really seems to bother them is a lost passion for doing free work. For instance, here’s how one Ohio employer describes her challenge.

Since the onset of the pandemic, several employees have asked for more pay when managers asked that they do more work, she says. “It was not like that before Covid at all,” she adds.

Read that last part again. This manager is accustomed to asking people to work without pay and having those people do it. She is disturbed it’s harder now.

I suspect these expectations arose in the period when workers had to compete against each other. Staying late became a way to impress the boss in hopes of higher wages, promotions, or at least avoiding layoffs.

Data says it’s common, too. An ADP Research Institute survey found, as of November 2021, US workers said they were doing 8.4 hours of unpaid overtime work each week.

What does that mean?

For one, it disputes the idea “nobody wants to work.” Gifting your employer an extra 8+ hours every week is the opposite of lazy.

It also means our hourly wage data may be significantly overstated. More hours without more pay would make the true hourly rate lower than we see.

But most important, if employers are accustomed to having this free labor available on demand, and it disappears or isn’t free anymore, an already-severe labor shortage could intensify further.

The data shows it may be happening, too. That 8.4 hours per week is down from nine hours in ADP’s survey the prior year. That would mean the free labor supply fell 0.6 hours per worker in 2021.

Multiply that by 150 million workers and it means employers lost 90 million working hours per week—roughly equivalent to 2.3 million people leaving the labor force.

If you’re wondering where the workers went, this might be a clue.

Why are today’s workers less willing to put in those extra hours? Well, if they were doing it to stand out from the crowd, that need is no longer there. The crowd retired, or is still in school, or can’t immigrate to the US, or otherwise isn’t competing for jobs.

The Labor Department tracks how many open jobs companies report. From 2000 through 2018, the number of unemployed people exceeded the number of jobs available. Now it’s the other way around.

As of November 2022, US employers were listing 1.7 open jobs per unemployed worker. So even if every jobless person immediately went to work, employers would still need more.

That’s actually an improvement, too. In March 2022, the ratio was as high as 2 open jobs per available worker.

This isn’t just about COVID, either. Look at the blue dashed line I added to this chart of the jobs/workers ratio. It shows the ratio grew steadily in the pre-pandemic years, while remaining in employers’ favor until 2018. 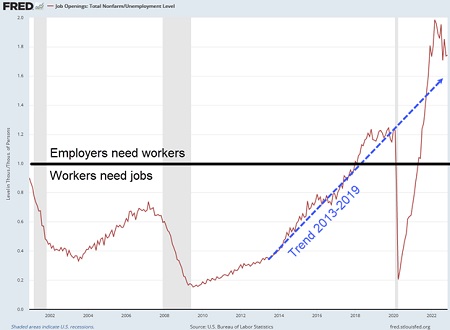 Carry that same line straight through the COVID period, and the ratio is now about where it would have been had the trend continued uninterrupted. That tells you it’s a longer-term change. COVID made matters worse, but this would probably be happening anyway. Demographics are destiny, as the saying goes.

Employers aren’t powerless. They can try to automate some jobs or hire lower-wage overseas remote workers. That doesn’t work for everything, though.

The real problem is a large consumer cohort—the Baby Boomers—has left the productive workforce (or will soon) but continues generating demand for food, housing, healthcare, travel services, and a bunch of other things that aren’t easily automated or outsourced.

The law of supply and demand says wages will keep rising until those goods become so expensive people stop buying them.

Before that point, however, companies will have to sacrifice profit margins to attract revenue-producing workers. And that free labor supply they’ve relied on will continue shrinking.

We should see the effect in stock prices… maybe sooner than you think.