The race is on to find a vaccine for the coronavirus. Some of the world’s best companies and brightest scientific minds are working overtime to develop, test, and bring to market a safe and effective immunity to the virus.

When that might happen is just a guess at this point. But many in the healthcare and scientific community are confident that a vaccine will be ready within the next 12 to 18 months.

What we do know is that some 49% of Americans plan to get the SARS-CoV-2 vaccine. But getting one as soon as it is available is far from guaranteed.

That’s because—when a vaccine does eventually roll out, and a national immunization program kicks off—it raises a big challenge.

Between 100 million and 200 million Americans will likely get immunized against COVID-19.

If each person receives a single shot, it will require an equal number of syringes, plungers, needles, and vials to administer the vaccine.

If a dosing regimen of two shots is needed—which the Mayo Clinic thinks is likely—that would double the number of injection units needed to upward of 400 million… and potentially a lot more.

A sudden spike of that magnitude in the demand for syringes and needles will put a huge strain on manufacturers.

And the possibility of a shortage of syringes and needles has already grabbed the attention of the federal government, the healthcare industry, and medical equipment manufacturers.

The Needle in the Supply Chain Haystack

The US faced a similar situation during the 2004 flu epidemic. And one company played a pivotal role in meeting the demand for syringes and needles—Becton, Dickinson & Co. (BDX).

This medical technology company was started in 1897 and built the first US plant that made nothing but syringes and injection needles in 1906. Today, this New Jersey-based firm is the largest maker of syringes and needles in the world, and the biggest in the US.

In early May, the CEO of BD warned that there won’t be enough capacity to produce the number of syringes needed in the US if a coronavirus vaccine is developed.

The company is engaged in “active conversations” with the federal government on how to get prepared once a vaccine is ready.

Peter Navarro, the White House director of trade and manufacturing policy, added urgency to the call for action when he estimated that the US will need 850 million syringes to deliver a vaccine.

That figure doesn’t even include the supplies needed to deliver flu shots, which should see a surge thanks to pharmacies increasing their orders.

With a Little Help from Our Local Friends

In normal times, the US could fill any supply gap with imports from foreign suppliers.

But these aren’t normal times. Since the onset of the pandemic, 86 countries have either banned or restricted the export of medical equipment, according to the Global Trade Alert. 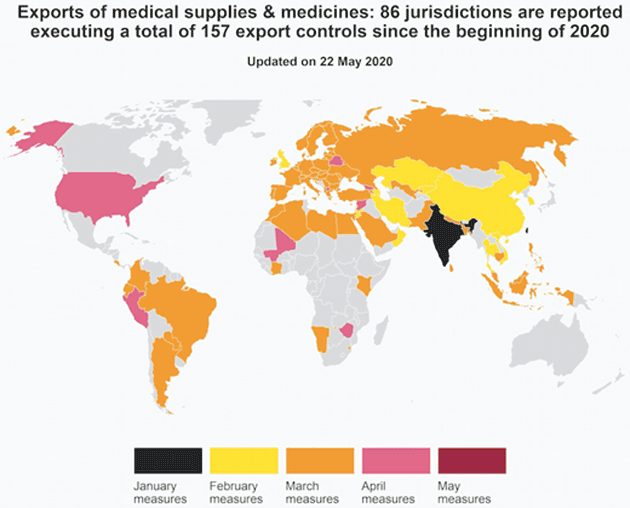 So the US will likely be forced to rely on domestic producers to meet the impending demand for vaccine delivery.

Becton Dickinson will be a big part of the solution, and its sales of syringes, injection needles, stoppers, plungers, and vials should see big growth over the next one to two years. 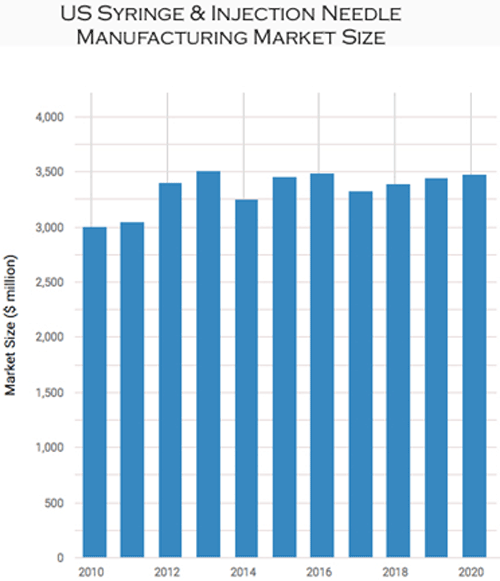 This segment of the medical device industry earns about $3.5 billion in annual sales.

Before the pandemic, sales growth in this segment was forecast to be about 1.2% in 2020.

The new reality is that sales will grow many times faster than the number projected just three months ago with a coronavirus vaccine on the horizon.

Over the last five years, BDX stock (orange line) has consistently outperformed the S&P 500 (black line). This year’s market crash, however, has put the five-year performance of BDX in line with the broad market indexes.

The latest repricing has put BDX on the radar of hedge funds, and their holdings of BDX have never been this high, according to recent findings at Insider Monkey.

Becton, Dickinson & Co. looks like a strategic short-term play on the unfolding dynamics in the coronavirus vaccine story, and a solid intermediate-term investment in a global titan in the medical device industry.

This moment in time is unlike any other in recent history. Change is happening faster than ever. All the news can get overwhelming, so thank you for making Reality Check part of your required reading. Now, let’s look at some other stories you might have missed…

As always, we enjoy hearing from you. What’s on your mind? Tell us here.

This is the most preposterous article I have seen. An immunization of the magnitude would require a military solution.  The services use a pressure gun with out needles for inoculations. One hundred people can be inoculated with at about 3 seconds each if they are all lined and ready to go.  All you need to do is replace the canister in the air gun and our good to go again.

Yes, Becton Dickinson is a good company and it makes sense they would benefit from the need for syringes.

But can we please not act like complete ignorami when speaking of the chances the creation and production of a “safe and effective” vaccine is imminent ... 12-18 months.

1: There are several corona viruses afield in the world. No safe and effective vaccine has EVER been created for any of them.

2:  It wasn’t for lack of trying.  They created a corona vaccine, which they tested in ferrets.  They all developed antibodies.  Everything looked great ... until the animals were exposed to the wild virus and died.  Back in ‘66, they developed a corona virus which they administered to a group of girls.  Same thing happened.  Antibodies were created.  Looked like a success.  All the girls got sick when exposed to the wild virus and 2 died.

3)  It normally takes 10-15 YEARS to develop a vaccine for any disease, much less one for a class of viruses no one has ever created a vaccine for.  1-10 years for the initial phase and 4-6 years for all the safety testing.

4) Bill Gates, himself, acknowledges that at a complication rate of just .1 of 1%, 700,000 people will be injured by the vaccine worldwide.  Maybe that’s why, despite the absurd amount of hype, only 49% would accept the jab. Looks like Bill’s dream of forcing us to take it ain’t gonna work.

5) There are treatments that work, both as a preventative and therapeutically.  And yes, that includes hydroxychloroquine, despite what the Lancet paper says.  It is so methodologically flawed and outright fraudulent that it’s sure to be retracted.  You have to use HCQ with patients EARLY and use it with zinc.  Then, it’s very effective.  It doesn’t work with people in late stages or without zinc.  Zinc is what does the work of preventing the hijacking of the RNA in the cell, but zinc can’t get into the cytoplasm without the help of an ionophore.  HCQ is the ionophore.  No HCQ, no transportation of the zinc.  No zinc, no positive effect.  But HCQ isn’t necessary to open the way for the zinc.  Quercetin and EGCG, the polyphenol in green tea, are also ionophores, are cheap, and are available with no prescription, because all side effects of taking them are beneficial.

So why the scramble to discredit HCQ, not even talk about quercetin EGCG and zinc, promote Remdesevir at $100 a tablet, and relentlessly push the idea that we can never get back to normal without a vaccine?  BECAUSE THERE’S NO MONEY FOR BIG PHARMA IN CHEAP AND NATURAL TREATMENTS.

Anyone who willingly consents to accepting any vaccine they come up with in 12 months ... or 15 years for that matter ... is simply ignorant.  Your chances of doing serious harm to yourself are significant.

Oh, and by the way, the Department of Defense, did a study and discovered their servicepeople had a 36% BETTER chance of contracting the Wuhan virus if they’d had a flu shot.  Just thought your readers who may get conned into one of those jabs oughtta know.

A vaccine is not the answer.  A healthy immune system is.  But that approach won’t line anyone’s pockets.

BDX certainly seems to have good prospects but when its trading at 73x earnings it does not appear to be anything close to a bargain.