I get the feeling that we give the Fed too much credit.

It can print money and buy securities like it’s doing right now, and that makes stocks and bonds go up in the short term. But it doesn’t explain the last 30 years of behavior in the capital markets.

If you’re looking for an explanation for why the stock market is going parabolic, it’s not the Fed.

Ok, it’s not entirely the Fed.

They’ve been working and enjoying high salaries and saving and investing for years. And for the last 10 years or so, they’ve been retiring and living off their retirement savings.

Sometime in the next few years, more of them will be retired (and dis-saving) than working (and saving). And we will experience capital starvation rather than capital surplus. Stocks should go down, and interest rates should go up.

Years ago, I bought Peter Zeihan’s The Accidental Superpower and never got around to reading it. Read it on a flight last week. His chapter about demographics is compelling.

To Zeihan, demographics (and geography) are destiny. I agree with that to a certain extent. But I will add that ideology is also destiny, though he would probably say that was a function of demographics and geography.

We will experience a shortage of capital for a number of years. The good news is there’s another large generation coming along to pick up the slack from Generation X: the Millennials. And there will be an echo of the previous boom. But times are going to be hard for Gen Xers like me in their peak earnings years.

Taxes are going to go up a lot, among other things.

Up until recently, I never paid much attention to demographics. As a quote unquote “trader,” I ignored demographics because it didn’t provide useful signals.

But demographics provides the cleanest possible explanation for this: 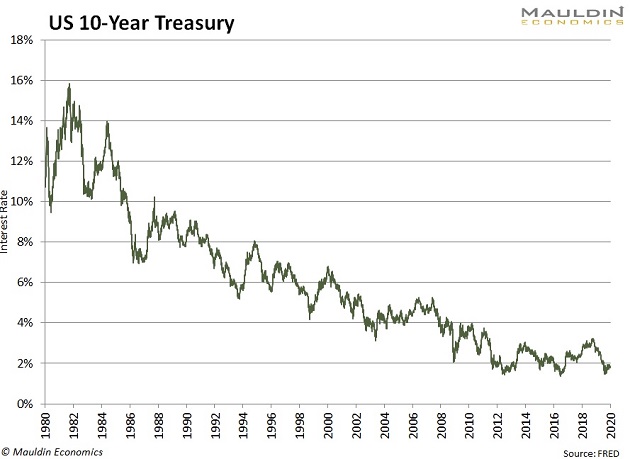 Not whatever the Fed was doing.

You don’t have to be Garry Kasparov to figure out what happens next: stocks go down, long-term yields go up, and the Fed goes into overdrive to forestall what looks like a recession. It cuts short-term rates—a lot, possibly into negative territory—and the yield curve steepens dramatically.

If you’re wondering, real estate doesn’t do well in this scenario, either, as Boomers unload their primary residences, downsize, and indebted Millennials can’t pick up the slack.

I have a reputation as sort of the macro doom guy, and I see no shortage of ways for things to go wrong. But nobody looking at US demographics could reasonably come up with a happy ending here. And that’s before we even get into a conversation about entitlement programs, which is unpleasant.

There Is No Escape

How does this affect your asset allocation?

What I’m looking for is a period of underperformance of equities that lasts a really long time, like, possibly as long as 1969–1982. 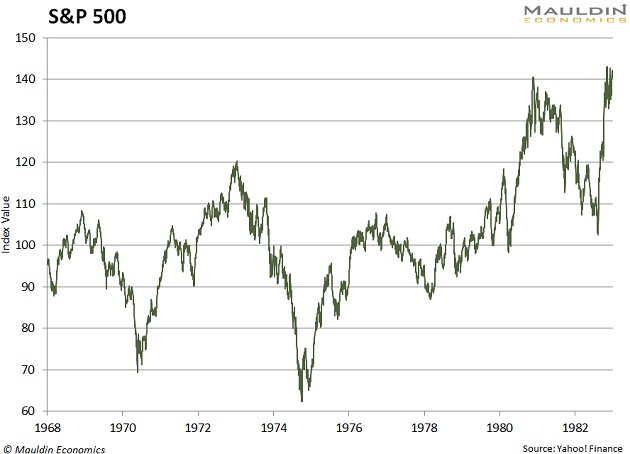 On Wall Street, beliefs change over time. The current belief is that stocks will go up forever. That belief will change—all beliefs change.

What we have now—and what we have had for years—is a historic gap between the performance of financial assets (stocks and bonds) and other assets (commodities). I expect that mispricing to resolve itself eventually.

When? Again, demographics gives us no clue on timing. If you have a portfolio that is mostly stocks, it is probably worth thinking of a little diversification. You don’t have to sell the top tick.

As for the Baby Boomers, maybe it’s time to sell short some businesses with terrible demographics, like Tommy Bahama, Harley Davidson, and AOL/EarthLink domains.

Speaking of the Boomer-caused prosperity and the subsequent downturn: Both can be equally scary, but a great way to deal with that is through strength in numbers. I’m kind of a loner myself, but I can appreciate what John Mauldin has done by creating the Alpha Society. It’s like being a part of a power group of serious investors and financial experts who know what they’re doing.

And with lifetime access to all the research, you’re pretty much set when it comes to diversification. The Alpha Society is only open until midnight tonight, Thursday, Jan. 23. So if you want to join the club and get a great deal on just about everything we publish—plus a free ticket to the SIC 2020—click here to jump right in.

Jared, What commodities do you think will blossom? Gold is an obvious one but I am wondering what other ones you see being good investments. I also am ready to read Peter Ziehans The Accidental Superpower and he has two more after that. I have watched videos of his speeches so I have a pretty good idea of the content and I agree the demographics are compelling.

Kind of a Tangent, but what about the reserve requirement. Isn’t that a pretty powerful tool the Fed controls?

Minor comment on “Baby Boomer Retirement:”  What if it doesn’t fit the pattern of previous generations?

I am a boomer and I am not going to retire soon (I could, but will not).  Due to the demographics, there is not a sufficient number of Gen-Xers available to do my job.  I work in the high tech industry and have peers who are still working at ages 66, 67, and 68.  It is anecdotal, but these people are not working because they can’t afford to retire.

When Social Security was created, average life expectancy was lower than the age of 65 - which is why the math worked.  Now life expectancy is closer to 80.  People are healthier and live longer.  Maybe the boomers will push the average retirement age and alleviate the “demographic crisis.”

Thanks for another great article.

But, I must ask, what if the long-term inflation in asset prices and decline in interest rates is not due to demographics?

What if it is simply that there is less demand for capital over time?

The theory is simple:

1.  Every year, it gets easier to make stuff.  The amount of capital that it takes to make stuff declines over time.

2.  Services take up an increasing amount of the economy, but, providing services does not require as much capital as producing goods.

3.  It is possible to create new stuff (or services) for people to buy, but there are limits to the amount of stuff that people will buy.  And in any case, if new stuff is created, it is easy to make and doesn’t require that much capital (and the amount of capital required to make the new stuff will decrease every year).

In your theory of demographics, there is a requirement that, at a certain point, capital will become scarce.  Because Baby Boomers will sell stocks, etc etc.

But in the alternate theory as above, where there is a structural excess of capital, and the price of capital (ie the interest rate) continues to decline as a simple reflection of the fact that there is an over-supply and it isn’t needed, any predictions that you make based on your theory of demographics will likely be wrong.

And, every time there is a downturn in the market, possibly you will believe that this is the beginning of the big demographic shift or whatever.

The only way to change a situation like this would be to create a new and large source of demand for a heaping and growing pile of capital.  And only then would you have inflation, capital scarcity, higher interest rates, etc.  But in the absence of that, you would not.

At any rate, thanks for listening.