Around the summer of 2006, when I was at Lehman Brothers, I started bellyaching in my notes to clients about how the market went up every day. I am a pretty creative guy, so every day I had very colorful (and irreverent) things to say about how stocks went relentlessly higher and how my life sucked.

This went on for a couple of months.

Then, one day I sent out a whining email about stocks and I got back a three-word reply from a hedge fund trader:

In almost 20 years in the investment business, I think those are the most profound words I have ever heard. There is a lot of wisdom in “bull market, dude”:

Incidentally, here is a chart of the S&P 500 around that time—the arrow points to the “bull market, dude” email. 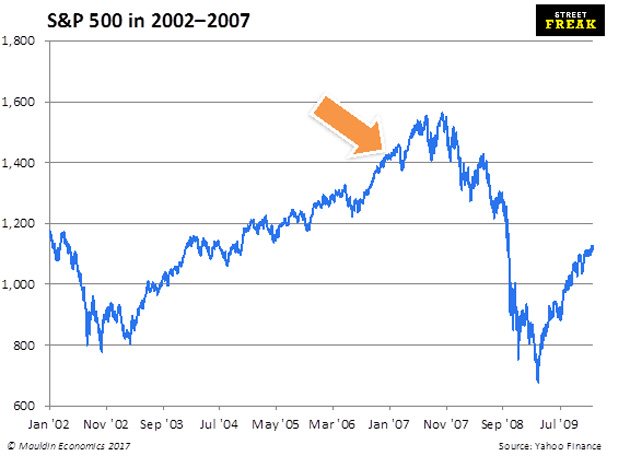 The “bull market, dude” guy ended up top-ticking himself, but it doesn’t mean he wasn’t right.

We have all the classic warning signs of a big stock market top:

And yet people are mostly ignoring them. 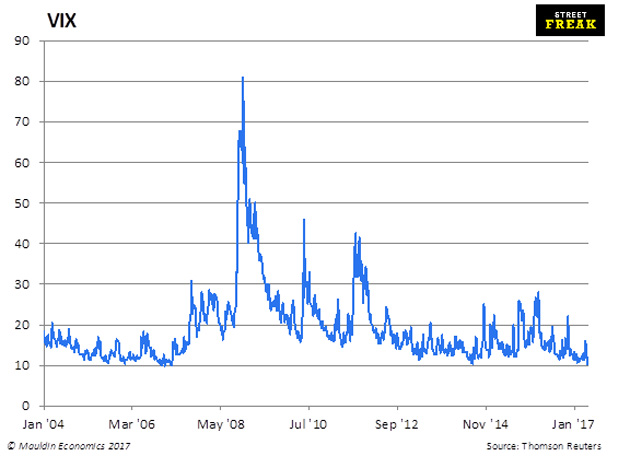 I’m not kidding about credit and vol. The same thing happened pre-financial crisis. Same thing. The VIX dipped below 10 and options were still a sale, because realized vol was even lower. There was nothing to do.

As it turns out, that was a pretty good leading indicator of some major financial stress.

There are a lot of people who say that you can’t predict bear markets, so you might as well just ride them out and dollar cost average. Also true—for most people. If you drill teeth for a living, you probably don’t have any business trying to time market cycles. Perhaps you rely on me for that. Better than nothing.

But it is true that if your time horizon is basically infinite (retirement 40 years away), it doesn’t make a lot of sense to try to avoid a 20% speed bump.

If you’re a professional investor, then you care very much about avoiding (or capitalizing on) bear markets. Problem is, the timing is still impossible.

“Professional” investors have been buying cheap stocks and selling expensive ones for the last four years, and they keep getting carried out, because nobody has that kind of staying power. You might be right in 2017, but if you were early in 2013, it doesn’t really matter.

All of investing is a push/pull between being early and being right. Smart guys are always early. Very smart guys are always very early. The smartest guys can see stuff years in advance. And their returns are often the lowest, because they shoot before the squad is ready.

Do you remember 2001-2002, during the dot-com bust? If the stock in question didn’t have real earnings and pay a real dividend, it was taken out with the trash. And that will happen again.

Stocks and bonds are securities. They give off cash flows.

Currencies aren’t really securities, but they also give off cash flows (these days, sometimes negative).

Stocks, bonds, and currencies are “things.”

Credit and volatility are different. They are not things. They are a force.

Let’s put this in physics terms: if stocks and bonds are matter, then credit and volatility are gravity—the force that holds matter together.

Except gravity is not constant in the universe (or finance). It can vary across time. Right now gravity is very strong. Someday, it may be very weak.

That’s why market experts pay so much attention to credit and volatility to gauge the health of the financial markets. When credit gets rich, people are willing to receive 4.5% coupons on cov-lite pik-toggle deals.

At the top of every cycle, the cov-lite stuff comes out. Remember, “credit” comes from the Latin “credere,” which means trust. There is no shortage of trust going around these days.

Volatility (as a measure of the price of options) is probably the most over-interpreted market statistic around. In general terms, it is a measure of fear or complacency. But it is also driven by other concerns: when interest rates are low, people are incentivized to sell options for income. You know that the Fed suppresses volatility—well, this is how it happens in practice.

Credit and vol tell us that financial conditions are very overheated. Do with that information what you wish. It may not be the best time to initiate a new position in a stock like Amazon. It might be a good time to accumulate cash, which gives you the option to buy something cheaper at a later date. People are always so derisive of cash in the bank. Your money isn’t “doing” anything. Actually, my money is just waiting for a better opportunity. 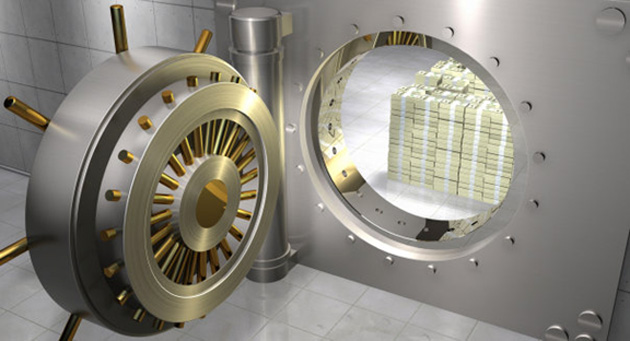 *That’s not strictly true. I sent out an email the other day, taking a small victory lap on Macron, France, and the hugely-against-consensus ETF that’s up nearly 20% since I recommended it to my Street Freak subscribers.

Even in a bull market, dude, there are still good opportunities.

If you didn’t see that email, here’s the recap: right now you can take $100 off Street Freak, or $200 off Street Freak and The Daily Dirtnap. Both offers have money-back guarantees, which I don’t like, so it should be a pretty easy decision. If you’re seeing the warning signs of a stock market top, too, you may want to check it out.

I really liked this weeks’s edition. The idea of matter and gravity is nice and I also think people interpret way too much into current VIX readings. But Dude, patting yourself on your back for the France trade just after Yelp is just not very good timing.