It was the year we invaded Iraq (regrettably). The markets were expecting a decisive victory. During the days and weeks when American troops advanced on Baghdad, the market climbed. As they entered Baghdad and marched on the center of the city, the market traded higher and higher.

Finally, American troops fastened a rope around the neck of Saddam Hussein’s statue and attached the other end to a tank. The world watched on television as the tank backed down and toppled the statue.

And at that very moment—stocks started to fall.

The rumor was that the US would win the war quickly and decisively. The fact or news was that the war itself turned out to be the simplest part—and the 14 years since have been anything but.1

Can you see the parallels with today?

Stage 1: The prospect of war/a Trump presidency is scary: stocks go down.

Stage 2: Once war/the Trump presidency commences, people see the positive aspects of it.

Stage 3: The reality of war/the Trump presidency proves to be far messier than anyone anticipated.2

One could make the argument that Brexit has just entered Stage 3.

I think that Inauguration Day will mark a big turning point in the stock market. Stocks could be headed for a dirtnap.

There is historical precedent: see what happened to stocks after Reagan’s inauguration. 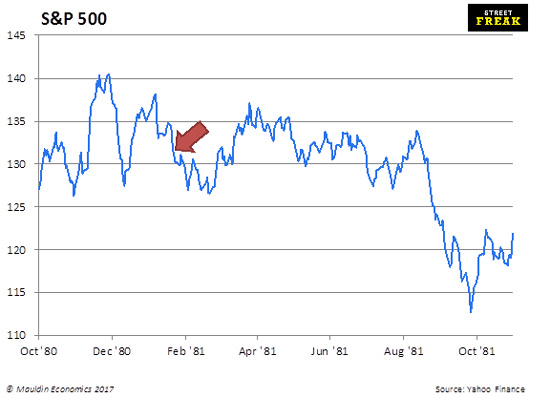 Right now, stocks are pricing in the most pro-business administration since Reagan, or possibly ever. The market is up. Sectors that benefit from deregulation are up even more. Bond yields are up. It’s the Trump trade.

The reality is that Republicans do not have 60 votes in the Senate, so getting things done like tax cuts is going to require some horse trading.

Trump does have leverage—lots of Democrats are up for reelection in the Senate next year, and many of them from states where Trump won big. It should not be hard to peel some of them off.

But that is where the horse trading comes in. Will Trump get the tax rates he wants? Probably not.

Will Trump get a full repeal of Dodd-Frank? Probably not.

What we end up with will definitely be better than what we had before, but in my opinion, the market has every bit of Trump’s proposed agenda priced in.

So just like after US troops pulled down the statue and the reality of governing Iraq set in, once Trump is sworn in, the reality of trying to get this stuff through Congress is going to set in.

In fact, I’d be surprised if the top tick isn’t when Trump says: “I do solemnly swear…”

If you’ve read my book, Street Freak, you know I used to have a hot temper. I was perhaps the biggest destroyer of phones on the trading floor. It’s a good thing that my colleagues had thick skin, otherwise I might have been the destroyer of relationships.

I’ve undergone a gradual but important change over the last eight years, since leaving trading: I really don’t get angry all that often. And that is by design.

There is nothing I hate more than getting angry. It disturbs my peace for days. Can’t sleep, can’t think about anything useful, distracted all the time.

They say resentment is like drinking poison and waiting for the other person to die.

So I really take pride in the fact that it is very, very hard to make me angry. I’d say that I’m down to about one meltdown a year. Which is one too many.

Not to say I don’t get annoyed from time to time. In fact, in the newsletter business, I spend about 30% of my time in a state of annoyance. But when you’re angry, there are changes to your body chemistry. The adrenaline starts pumping. That’s what I want to avoid.

I want to be the kind of person who gets rear-ended by someone at a stop light and gets out of the car and asks if the other person is okay.

I am not there yet!

Now you could say that by taking me out of the high-pressure environment, it was easy for me to work on anger issues. There is probably some truth in that.

Still, even if I got a job on a trading floor, I don’t see myself going back to my yelling and phone-throwing days. I’ve worked hard at it.

You can see for yourself when you meet me face to face at this year’s Strategic Investment Conference, which is held in May at a posh Orlando resort. I love meeting subscribers face-to-face. Last year’s conference was amazing.

For a few more days, you can still get tickets at the early-bird price, but January 15 is the cutoff. I say get them now as long as you can.

2 The actual date of the invasion was 3/20/03, which roughly coincided with the bottom in stocks. Saddam’s statue was toppled on April 9 of that year, which led to a small pullback, but stocks continued higher throughout the rest of the year as the market recovered from the dot-com bust.