Trump hasn’t had much good to say about Yellen. He said that her interest rate decisions were politically motivated. Hey, I was saying the same thing at the time. No disagreement out of me. No rate hikes for years, and now that Trump is elected, the Federal Reserve is suddenly keen on hiking with renewed vigor.

But let me tell you—as much as Trump does not like Yellen, Yellen does not like Trump. You couldn’t find two more opposite extremes. Yellen is about as cautious and risk-averse as it gets. Trump is like a drunk at the poker table, playing every hand, losing a lot of small pots, then next thing you know you’re losing a big hand to him.

I’m not even sure they’ve been in the same room, and I don’t know what would happen if they were.

I have to give the Federal Reserve credit—they take their jobs very seriously. It is not a “hack” institution; these are smart people who dedicate their lives to maintaining the purchasing power of the currency. We can say that they are misguided from time to time, but they are not malicious, and they are not hacks.

But you also have to remember that these are human beings, and human beings have emotions. So if Trump has made it very clear that he wants a weaker dollar—as he did on Tuesday—then you can bet that Yellen probably wants a stronger dollar, at least on a subconscious level.

Trump has been jawboning the dollar lower—with some success: 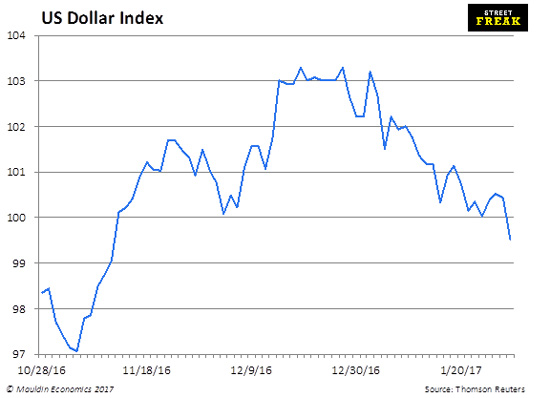 But what happens if Yellen starts jawboning it higher? Or what if it’s not jawboning—what if they actually hike rates? It’s hard to be short USD when rates are going higher.

Yellen is supposed to be around for another year, and I’m guessing that there probably will be some epic collision between her and Trump in the not-too-distant future.

It would be highly unorthodox for Trump to fire Yellen—that almost never happens, mostly because it leads people to believe that the Fed isn’t all that independent—but this is Trump we’re talking about here. Although I’m dying to know who Trump has lined up as her replacement.

Here is the reality of it: there are two vacancies on the Board of Governors that can be filled immediately. Who will Trump choose? I can’t find any speculation on the Internet on this.

Then, next year, Yellen and Stanley Fischer will be gone, so Trump will be able to appoint a chairman and vice chairman.

Of course, the number one Trump Trade is still intact: short bonds.

Between the two open seats and the chair/vice chair roles, Trump will have four of his own people on the Fed in the span of a year. And my suspicion is that these four folks will make it very uncomfortable for the Obama holdovers.

Monetary policy is going to be changing very rapidly. I don’t think people are pricing this in. Fact is, we can guess, but we don’t know what is going to happen.

If Yellen has a grudge against Trump, she sure isn’t showing it.

Yesterday’s meeting was pretty dovish. They acknowledged rising inflation, but didn’t seem too worried about it. Several Fed officials had said that they want to hike three times this year, but the Fed is well off that pace. Based on yesterday’s directive, it’s unlikely that they’ll hike in March, which means they’re probably looking at June.

One thing to point out is that the composition of the FOMC is different from one year to the next, as four regional presidents rolled off and four new ones came on. All the dissenters are gone; this is a considerably more dovish FOMC, with Harker, Kashkari, Kaplan, and Evans.

It kind of goes without saying that I believe inflation is ramping and the Fed (like any government institution) is going to quickly find itself behind the curve. It’s not just ramping in the US—it’s even worse in Europe.

I think this is what happens if you leave rates at zero for eight years and print about four trillion dollars. People have been wondering where the inflation was—well, here it is. And it’s about to get worse before it gets better.

Trump will probably have more to say about Yellen because he doesn’t like Yellen, but the reality is that yesterday’s Fed meeting clearly helped Trump. All of which illustrates that the Fed isn’t a bunch of hacks, or is very concerned with maintaining the perception that monetary policy is not politically motivated.

But not hiking rates when inflation is roofing—that’s pretty much the definition of bad central banking.
________
1 This is pretty much the opposite of what I was saying before, but trade has been the number one focus out of the gate.

A. Dorrence, he is saying that inflation is worsening (as it is globally!) and that Yellen is behind the rate-hike curve.  IMO it’d have been even worse had Summers been there taking rates negative.

Even worse than letting price inflation ramp, for many years the Fed has turned a blind eye to asset price inflation. Indeed it has actually encouraged large, multiple asset price bubbles.  Many are going to pay an enormous price for their policy errors and this will likely happen under the watch of the current admin, wrongly saddling them with the blame in the court of public opinion and the clueless mass media, when in fact bad juju is already baked in the cake from decades of bipartisan mismanagement.

If Trump succeeds in turning the US current account from deficit to surplus, it will drain the world of dollar liquidity and cause a deflationary shock similar to the 1930’s when Britain did that with the world’s reserve currency at the time.  It will also drain the source of foreign funding that the US government needs to sell Treasuries and operate, probably forcing the Fed to step up as buyer of last resort and institute a massive BOJ-style QE.

Thus dollar bullishness might be misplaced and about to change.  The entire investing world has been long dollar.  As an FX/market technician, I already called a dollar turn several weeks ago (a partial retracement bounce higher soon, followed by new lows later will considerably heighten the possibility of a new protracted dollar bear market).  Apart from the technicals, which I perceive is not your thing, have you considered that everyone already expects the EU will breakup with the Euro, but that a coming US breakup along political lines is not at all discounted yet?  Any dollar strength should be sold short.  Forget EurUsd parity.  Instead, think AudUsd parity, as that pair will trend higher this year within a new multi-year bull.  You may put that into the portfolio, for income investors (subs can get decent interest on short-term Aud paper in addition to the FX gain).  Speaking of income investing, thank you for your call on the high yield market more than a year ago.

Good one.  Makes sense to me.  when carney left the BOC to head up the BOE, the Cando had been comfortably above parity with USD for an extended period.  They replaced him with the guy who headed the Export Development Agency - a pure trade guy.  Cando fell from 1.05 to 70 cents in a couple years.

But, didn’t guys on Team Obama also say a few years ago that, for the same reason Trump wants to, they were gonna tank the dollar? Yes, I definitely remember that.  I don’t know whether they tried very hard or just got steamrolled by the market (and by a Fed that decided to taper and diverge its monetary policy from other CB’s).  Silly bam-bam, if they really wanted a weaker dollar he should have appointed the Father of Negative Interest Rates, the impractical Larry Summers.

“But not hiking rates when inflation is roofing”.  Nice wordcraft here Jared!

I am confused. You seem to say that Yellen was wrong to keep rates at zero but that’s she’s wrong to consider raising rates now when inflation is ramping up (or by “roofing” do you mean that it will level off?).