That means baseball season will begin soon. I’m more of a baseball guy, myself. Every year, I get a ticket package to the Myrtle Beach Pelicans, the Advanced A minor league affiliate of the Chicago Cubs. There is nothing in the world that is better than minor league baseball.

Like the time when the Pelicans gave out “bobblefingers” on Prostate Cancer Awareness Night. 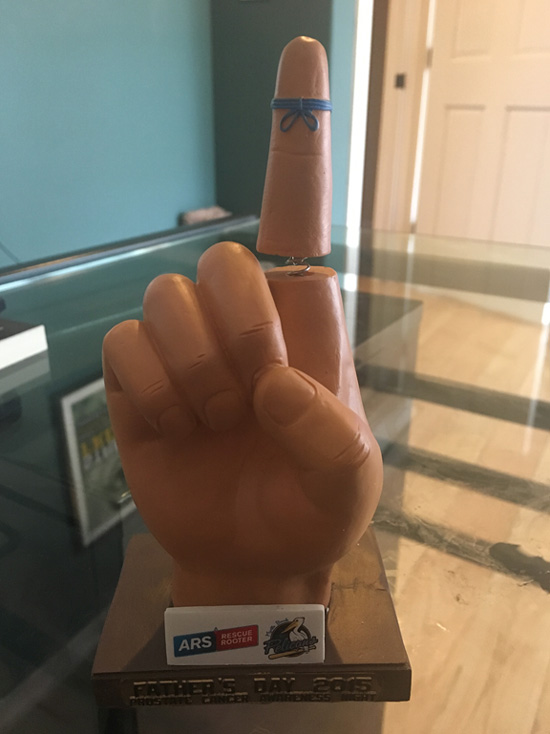 That’s not even the craziest thing that’s happened at a Pelicans game. You can probably find a video online of the team dog, Deuce, living up to his name in the middle of a game out in the outfield. I was there for that one.

Where was I? Oh yes, the Super Bowl. During the game, a lot of people were passing around this chart of the odds of each team winning: 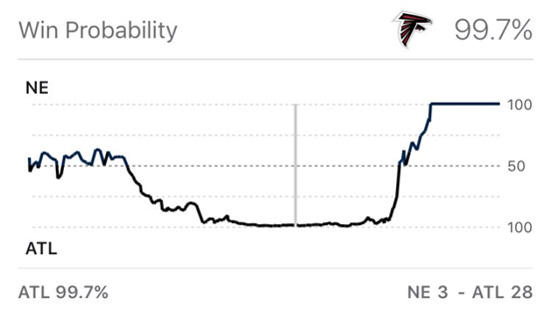 The intragame probability of the Patriots winning had dropped to a fraction of 1% in the third quarter.

Of course you would. It’s easy to say that in hindsight, but never mind hindsight—you probably would have done it in real time. It’s just obvious. I get 200-to-1 on the greatest quarterback and coach of all time? Done and done.

So in reality, no bookmaker would ever offer you those odds. You would probably get offered 30-to-1 or 50-to-1. That represents the bookmaker’s edge. And the edge has to be pretty substantial when the house is laying heavy odds like that.

It still would have been a hero trade at 30-to-1, but not quite as exciting.

Beware the teeny puts. If you were a market maker on the floor, you generally didn’t want to be short any teeny puts right before earnings. Just spend the money and buy them back. No reason to be short unbounded downside risk for just a couple hundred bucks1.

The teeny puts have turned into nickel puts since decimalization, but the mythology is the same: everyone dreams of buying cheap options and falling ass-backwards into money. Problem is: it almost never happens.

So the teeny option is a bit of an optical illusion. It is cheap, in dollar terms, but in valuation terms, it is very expensive.

The theoretical value is indeed theoretical—it is derived from some estimate of future volatility for the stock. Sometimes, that estimate is wrong.

But as a general rule, if you buy cheap things and sell rich things, you will make money in the long run.

So if you see a put or a call offered at five cents, you can bet that the theoretical value is much less than that. Perhaps less than a penny.

All of trading is knowing the value of something. Many individual investors focus on things other than value when they invest. They focus on the technicals (is it going up?) or sentiment (is everyone bearish?) or macro (what will the Fed do?)—but not the actual value of a stock.

Of course, it isn’t that simple to determine the value of a stock—it’s often a matter of opinion. But having a model is a good starting point.

The fixed income investors are usually the first to get caned by big market moves, because they think bonds are mathematical and easily valued, when they actually are not.

They have the illusion of being rational. Nothing could be further from the truth.

Of all things, valuing options is actually pretty straightforward3. There is nothing complicated about Black-Scholes. Your estimate of future volatility is probably as good as the robot’s. And the reason options get mispriced is because there are plenty of people who are trading options for reasons other than value—like the covered call writers, or the stupid vol ETFs that just sell volatility in a blob.

Buying call options on something simply because you think it will go up will probably set you up for big disappointment. There are a lot of other considerations.

There has been a lot of discussion about how volatility is so preternaturally low after the inauguration. Trump is turning out to be plenty volatile, but the market is not. Is volatility cheap? I will have the answer to this in my next issue of Street Freak, but I’ll give you a hint:

One final thing—if you’re interested in Street Freak, you should know that Mauldin Economics is running a promotion right now where you get Street Freak, John Mauldin’s Over My Shoulder, and Patrick Watson’s Yield Shark for $199.  So think of it as getting Street Freak plus two other publications for free.  It’s an exploding offer, so sign up soon.
____________

1 In my novel All the Evil of This World, one of the main characters ends up buying a bunch of teeny puts in Bed, Bath & Beyond right before earnings, and the stock craters, leaving him with a windfall profit.
2 Calls are similarly overpriced, but most stocks don’t gap up as much as they gap down.
3 It gets more complicated in deals, and really complicated with biotech.

Dear Jared,
I looked at the chart for GPL and decided it did have a chance to make it to $2.50 and bought the farthest option I could get for nickels. Actually, Charles Schwab got them for me for 4 cents.

All I need is a large advance in gold and silver.

Would you take this chance?