I’ve been writing about the excesses of this bull market for a few weeks now. The chickens are coming home to roost.

(I like chickens, by the way—they make great pets. They have cool personalities, which makes you feel guilty for eating them.)

Tesla (TSLA), Bitcoin, and the ARK funds are in freefall. This has been a long time coming.

I want to talk about the mathematics of this for a second.

First of all, people are trading a lot of options. Most of them have no idea what they are really buying. Just like what they're doing with stocks, but now they're adding leverage.

Delta measures the percentage change in an option's price for every $1 move in the underlying. Gamma tells you how fast it changes. It’s convexity, or curvature.

Gamma is highest around the strike of the option. When the option is at-the-money (that's when the strike price is the same as the stock price), gamma increases with the passage of time.

Gamma is a measure of how quickly market-makers have to hedge.

Without looking, I would say that there is an obscene amount of gamma in Tesla's lower strikes. This is why the stock dropped from $800 to $600 in a blink—and could fall further. 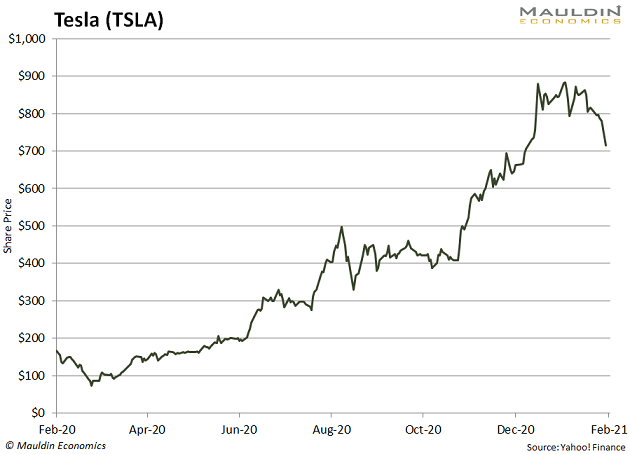 I also like to talk about something called covert gamma, which is gamma that lives outside of the options market.

The best example of covert gamma was with portfolio insurance in the crash of 1987, which was a strategy that explicitly replicated the payoff of a short options position. If stocks went up, you bought, and if stocks went down, you sold.

This is true of a lot of things in finance:

When I look at stocks, I try to think in terms of covert gamma. How far would a stock have to fall before people were forced to sell?

In Tesla’s case, probably a lot.

People are sitting on some pretty huge unrealized gains, and a lot of these people are cult believers who think that Tesla could one day have a $7 trillion market cap. They are unlikely to sell.

But selling might come in different forms, like with ARKK, which holds a very concentrated TSLA position.

The point is, when you look at the price action in Tesla over the last year, you see a lot of nonlinearity. Procter & Gamble (PG), it is not.

The company itself is growing linearly, but the stock grew exponentially. Either this is because Elon Musk is the best stock promoter of all time, or Tesla holds some promise above and beyond what a normal carmaker might do.

Probably a little bit of both.

The Search for Nonlinearity

I am constantly in search of convex opportunities, which makes missing out on TSLA (on the way up) so difficult to bear.

It was relatively easy to spot—once it paid off its converts in late 2019, it was off to the races. If you missed that trade, you should be mad at yourself, as I am. Those don’t come along very often.

GameStop (GME) was another convex opportunity.

Now, I haven’t seen any of Roaring Kitty’s YouTube videos or read any of his r/WallStreetBets posts. But if he was looking at the fundamentals of the company, he was barking up the wrong tree.

The fundamentals of that company were a disaster. But the convex opportunity came from the huge short interest in the stock.

Popular shorts rarely work. Most that did work, worked in the financial crisis, where there were liquidity issues.

It is very difficult for a company to go bankrupt. In a market like this, they can always refinance debt, issue more debt, or draw down a line of credit. Playing for the zero is just too hard.

Roaring Kitty says he still likes the stock, but he kind of has to say that for legal reasons. Then he had to back it up with a 50,000-share buy order. He will probably lose money on that.

I’m still looking for convex opportunities. I am not seeing too many on the upside.

Most of the upside opportunities are linear—if the last two to three years of bubblemania starts to unwind, the good opportunities will be to the downside. It’s been easy for far too long, and this stock market has made a lot of dumb people rich.

I like to say that the definition of a bubble is when people are making money all out of proportion to their intelligence or work ethic.

P.S. There is an intelligent way to make money, and it doesn't require a lot of work or even big risk. The smart path to wealth starts with these seven investments.