A few weeks ago, 38 million call options traded in one day.

Back when I first started in options 22 years ago, just 2 million options were traded nationwide—calls and puts.

This big spike in options trading volume is a worrying sign. It tells us that buying stocks isn’t exciting enough for people. They want more leverage.

Just like the recent short-squeeze action and and celebrity crypto endorsements, this is the type of stuff that happens at the top.

Signs of the Times

This is also a function of some brokers having a streamlined approval process for options.

It used to be that if you wanted to trade options, you had to provide some attestation that you knew what the hell you were doing.

Now, pretty much everyone is allowed to do it. And the impact on the options markets has been enormous.

Good stuff. But it’s just another sign of the times.

See if You Can "Spot" the Problem Here

I have traded both options and delta-one, otherwise known as spot. Options are options—delta-one is anything that is a linear instrument, like stocks, indexes, swaps, and futures.

After having traded both over the course of a career, I can tell you that trading delta-one is a lot more nuanced than people think.

But options traders generally get paid more, under the theory that what they’re doing is more complex and requires higher intelligence.

Delta-one traders at banks are often second-class citizens. If you remember the whole rogue trading incident at Société Générale years ago, Jérôme Kerviel was paid $66,000 a year to sit in a corner and crank on his index arbitrage, with no possible hope for advancement.

Options traders look down on delta-one traders. For sure. At the bottom of the totem pole are the cash equity traders. Those don’t even really exist anymore—they have been replaced by robots.

Trading spot is fiendishly difficult. It should also be pointed out that the highly respected hedge fund managers out there made most of their money by trading linear instruments: stocks, bonds, and commodities.

Volatility, as an asset class, has only recently become large enough to support a small ecosystem of funds.

Why Is Trading Spot More Difficult?

The first thing to realize about trading spot is that spot itself is frequently nonlinear. GameStop (GME) is a good example. 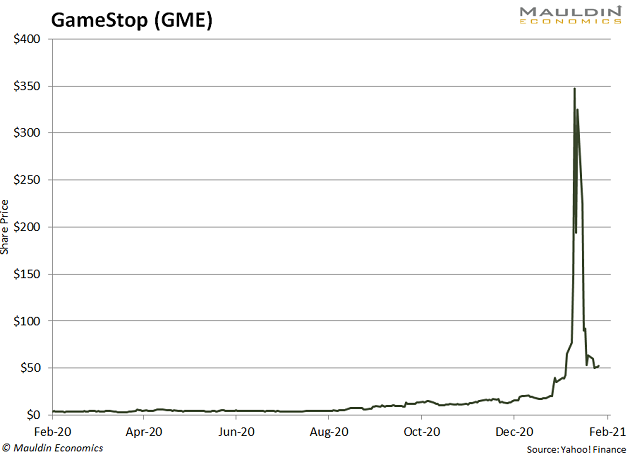 For sure, there was a lot of action in the options—the mythological “gamma squeeze” that forced the stock higher. Still, if you were just trading the stock, the price action quickly became nonlinear.

If you had some understanding of GameStop’s role as the most consensus short idea in the marketplace, you might have been able to predict the nonlinearity.

And even if you were long GME, when do you sell?

Michael Burry—whose Scion Asset Management firm was immortalized in The Big Short for betting against the housing market before it crashed—was long GameStop.

Burry hasn’t said where he sold, but I gather it was much lower than where it ended up. Again, there is a lot of nuance here.

Most of the complexity around trading spot simply comes from the emotional fitness it requires to manage risk. Nothing goes up in a straight line, so it is a constant battle with your emotions every time there is a correction along the way.

Trading 10,000 shares of GE, on the surface, seems to be the easiest thing in the world. So easy, a guy in an insurance commercial could do it. Some of the cash equity traders I met at Lehman Brothers were some of the best risk managers I have seen (with a few exceptions).

Like I said, I started off my career in derivatives. I made my way down to the floor of the P. Coast Options Exchange and didn’t even know what they were trading.

When I was hired at Lehman Brothers, I really wanted to trade options. But the equity derivatives desk said they were full up—no available seats.

I was relegated to index arbitrage. A step down, I thought.

Then I spent the next seven years trading delta-one, and I got a much greater appreciation for the discipline and thought that goes into trading linear instruments.

I was no longer an options snob. I still got paid less than the derivatives guys, though.

The investing public is obsessed with trading options at the moment—you can make 10X returns! So easy!

It may be easy now, but the nature of markets is for the easy to get hard. It doesn’t last forever, and then you really will have to crawl out of the basement and get a job.

Please check out my latest music, Afterlife, on Soundcloud. It’s gorgeous. You can also check out Style from a couple of months ago. Finance and music go hand in hand.