It sure seems like we’re going to get inflation.

Precious metals are roofing, copper is flying, the yield curve is steep (under the circumstances), and every other indicator is flashing green for go.

Of course, actual inflation, as measured by the Consumer Price Index (CPI), is muted at 1.2%. 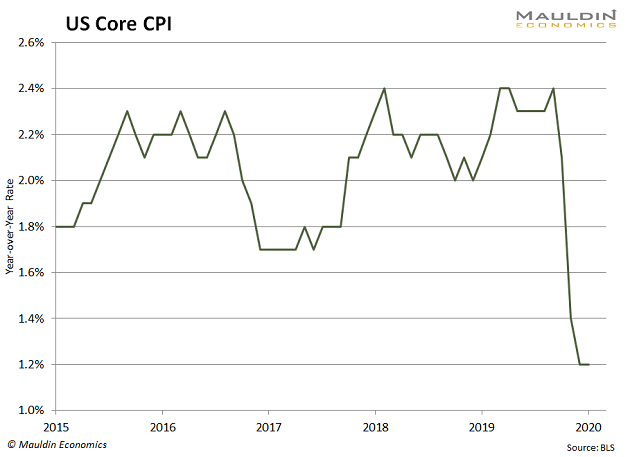 The interesting thing about CPI is that it’s surprising to the upside, even in the middle of a pandemic. We should be experiencing deflation right now, and we’re not.

My guess is that actual inflation will severely lag inflation in the capital markets, and it’s useless to look at it as any kind of leading indicator.

How do you get positive exposure to inflation? There are a bunch of ways, which we will talk about at some point in the near future.

In the past, I have written about silver, which I consider to be a right tail asset. When silver crashes, it doesn’t crash down, it crashes up. It’s done this a couple of times in history—once, during the Hunt brothers fiasco, and again, during the quantitative easing (QE) panic of 2011. 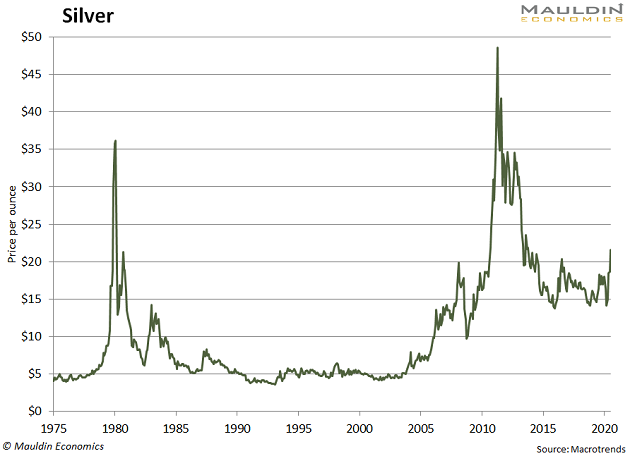 An asset with a big right tail can be very useful in a portfolio.

Silver, of course, broke out above $20 this week, and it seems poised to go higher. Investment demand will be robust. But there is also talk of increased industrial demand for its use in solar cells, which might become a reality if Joe Biden is elected president.

…but there is always a chance. And, given the political path that we are on right now, I would not rule it out.

There are people out there still recommending bonds, even after a 40-year run. There is not much juice left in the bond market, unless you think that rates will go negative. I thought that at one time (even last month), but I no longer do.

The mechanics of that are a little complicated—yes, it is possible the Fed will implement yield curve control at some point in the future, but only in short maturities. And it is possible that the back end sells off and the curve steepens dramatically.

I do not know the time frame on this, but for the first time in 40 years, getting some exposure to higher rates is probably a good idea, if slightly premature.

In fact, out of a range of possible investment ideas, Treasury bonds are probably about the worst. Treasury bonds are considered to be risk-free returns; James Grant once famously called them “return-free risk.” That is where we are at this point in the cycle.

Stocks as an Inflation Hedge

Some people are wondering why gold and stocks are going up together. This is a fair question. You see, stocks also (imperfectly) protect against inflation. Companies charge higher prices and earn more profits, which are passed along to shareholders in terms of higher stock prices.

I like to call stocks inflation pass-thru vehicles. They’re not precisely a store of value (though they have been, at various times, in periods of hyperinflation), but they do a good job of passing inflation along.

Going forward, I would expect the correlation between gold and stocks to increase, and for gold to become a risk-on asset. This means that the diversification benefits of holding gold will decrease. But you still want to hold gold for reasons stated earlier.

Stocks also have a significant right tail. They can go up a lot, as we are seeing with Amazon (AMZN) and Tesla (TSLA). 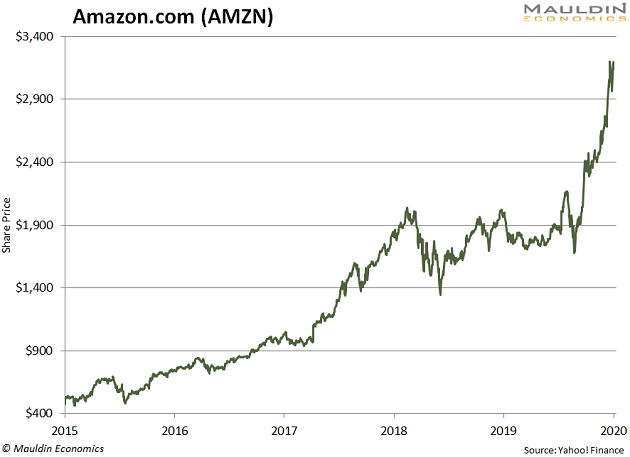 Crash puts are never a bad idea, but these days, crash calls are an even better idea. As it turns out, the listing of FANG futures in 2017 wasn’t the end of FANG, but the beginning. That is the thing with trends—they go on a lot longer than you think they will.

If we truly have an inflationary episode in the US, it is exactly the wrong time to be worried about valuation. In fact, valuation won’t matter at all.

We are seeing that with Berkshire Hathaway (BRK/A), which is essentially a large-cap value fund. It is having its worst year in a while, and people are wondering if Warren Buffett’s investing style has been discredited.

What Buffett did for years worked in a specific type of environment and then the environment changed. Buffett couldn’t even be a lender of last resort during the crisis because the government stepped in, which perfectly illustrates my point. 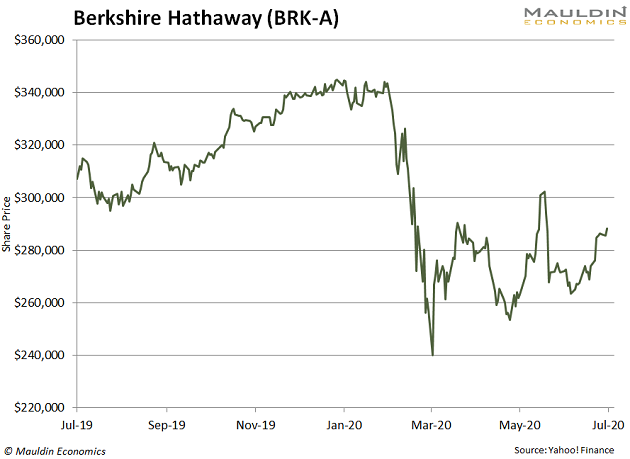 The shape of the distribution has changed for inflation-sensitive assets. They may go up, and if they do, they have the potential to go up a lot. And we’re likely in the very early innings of this regime. They’re playing the national anthem.

I encourage you to have a bigger imagination. About everything. Inflation sensitive stuff has the potential to go up in nonlinear fashion. It is the nonlinearity part that usually fools people.

And finally, please check out my latest music. It’s called Testimony, and it is sure to brighten your day.

Jared, when will your music be on iTunes?