If you are an amateur trader (or even an experienced trader), you might think that this is a good time to short retailers.

Take it from an even more experienced trader: By the time you hear about the trade, it is at least half over, and maybe more.

That’s not to say that there isn’t money to be made shorting retail—the JCPenneys and Sears of the world are probably not going to make it. But trading this sort of thing is a dangerous game. At some point, some of these stocks look like a tasty treat to private equity.

I’m more interested in talking about this from a philosophical standpoint.

We’re on the precipice of seeing a big slice of American culture get wiped out. Someday, people will find a VHS tape of Mallrats and look at it like an archaeological treasure. 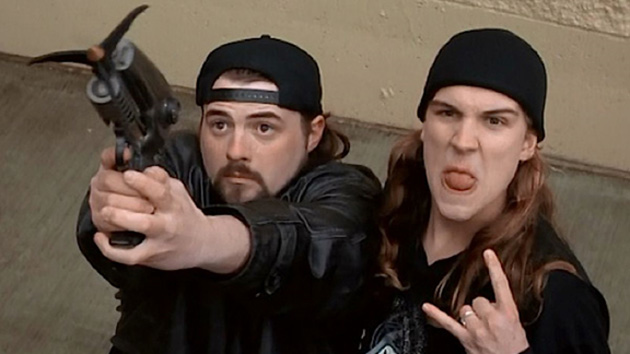 There was a mall near where I grew up. It opened to much fanfare on March 17, 1983. I used to save my allowances and go to Record Town (or Record World, or Tape World, all in the same mall) and buy a Depeche Mode cassette tape or something like that.

Read that sentence over again and marvel at how foreign it seems.

But Depeche Mode is still around!

Have you ever wondered how Planet Fitness can be so disruptive in the gym space?

A lot of it has to do with the fact that they’ve been able to move into these giant spaces in malls, once held by anchor tenants that have since moved out, paying a fraction of the rent that was previously being paid.

Their strategy actually doesn’t work at all unless they have cheap real estate. And with shopping centers struggling mightily, it’s been a boon for Planet Fitness.

So you have to wonder what this world is going to look like. I think about my drive along Highway 17 on the way to work. There is already one defunct mall. Will there be more? Will I drive past a half-dozen vacant shopping centers on the way to my office? Will everyone just sit at home and order stuff?

Will all retail go out of business?

That is what people fear.

Recently in The Daily Dirtnap, I did a write-up on Ulta Beauty Inc. (ULTA), a beauty products store/salon chain.

Technically, Ulta is a retailer, but have you seen a chart of the stock? 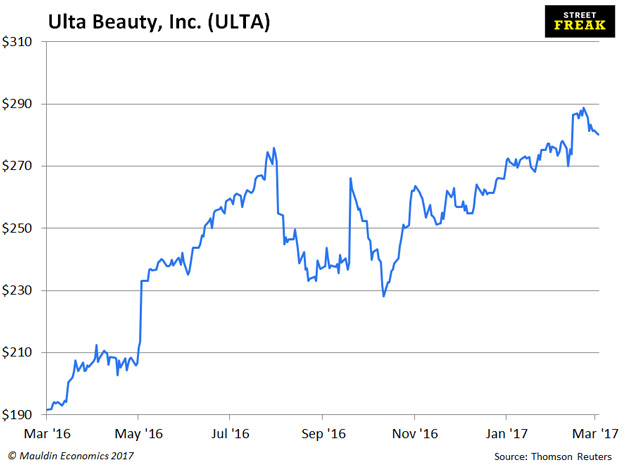 I thought all retailers were going out of business?

Ulta is an exception, because they have made themselves un-Amazonable. Yes, it is a store. But there is a salon, and a brow bar, and makeup counters, and Ulta has gotten to where it is today almost entirely by being helpful and friendly.

Ulta is a community. People go there to hang out and put on makeup. The staff will try to upsell you occasionally (and succeed!).

You can’t do Ulta in your home.

For example: I take my cats to a cats-only vet where they also do boarding and grooming. It has become a hangout for all the cat ladies in town. They go to the waiting room and hang out and chat and play with the kittens that are up for adoption. I will admit that I stop by every so often when I have nothing to do (it is on the way home).

The only way my vet’s office is going out of business is if they are chronically undercharging for services. Because they have turned into one of the most popular places in town.

If you are starting any sort of retail business, it has to be the sort of place that builds a community and gives people a reason for going there, even if they have nothing to buy. They might end up buying something anyway.

There’s an old saying on Wall Street that with any disruptive technology, it’s a lot easier to pick the losers than the winners. I can confirm that this is true. For an obvious example, BlackBerry (RIMM) should have been an easy short when the iPhone came out.

Finding the ULTAs of the world is hard. If I ran a retail long/short hedge fund, I wouldn’t be confident in my ability to do it. Picking losers = easy. Hard to imagine a scenario where JCPenney (JCP) and Sears (SHLD) are still around in a couple of years. 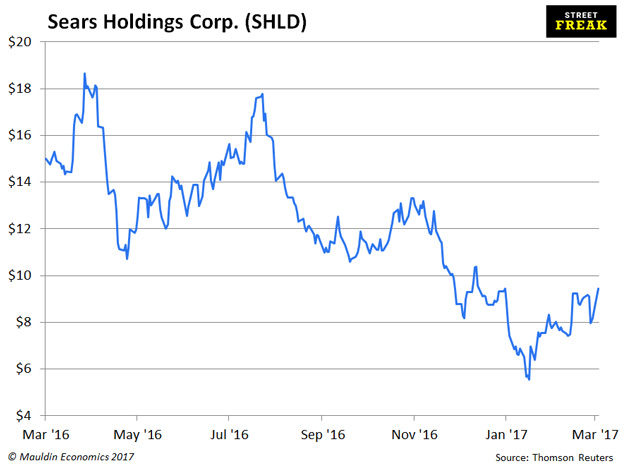 The irony, of course, is that 100-odd years ago, Sears was Amazon! Catalogue retailing—what an innovation.

That is the nature of capitalism: the disruptor gets disrupted. Sometimes it takes 100 years (which is why short selling is the hardest thing you can ever do).