The market dumped on Tuesday. For a good graphical representation, look at the three-day chart of the S&P 500 I keep on my desktop. 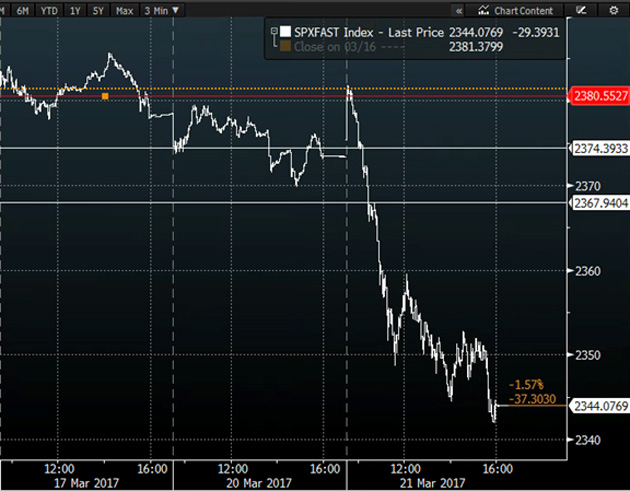 You can see a pretty radical change in price action from one day to the next.

The job of financial journalism is to try to explain the day-to-day variations in the stock market. Oftentimes, there is nothing to report—lots of randomness. This time, on the other hand, stocks went down hard—so there must be a story behind it.

As far as I can tell, the best explanation as to why stocks dumped on Tuesday is because it became increasingly unlikely that the “repeal and replace” of the Affordable Care Act would pass, because of a group of about 26 holdout Republican legislators.

For what it’s worth, I agree with the holdout legislators. The proposed law isn’t a repeal at all. It’s a collection of tweaks designed to get the original Obamacare working properly—along with a giant tax cut.

It is not the tax cut I disagree with. Tax cuts are great. But here’s the thing: if this doesn’t pass, the market doesn’t get the tax cut. And the market cares about tax cuts more.

Furthermore, if the ACA repeal doesn’t pass, it will cripple the Trump administration politically and delay a complete tax reform package even further, possibly into next year—if it happens at all.

Remember, the whole reason that the market ran up after the election was because Trump was this can-do businessman, capitalist president, who was going to cut corporate and marginal rates to the bone. That is looking less and less likely. Maybe even impossible.

I have been telling people (privately) that it was a big mistake for the Trump administration not to pursue tax reform first. Instead, we issued a couple of ham-handed executive orders that pissed everyone off and lost a lot of political capital, and then dove into the hornets’ nest of healthcare.

It’s odd—this group of people who were pretty smart about winning the election are turning out to be pretty dumb about legislative priorities.

Worse, both Trump and Mnuchin have said that people can use the stock market as a yardstick of the administration’s performance.

But the reality is, the stock market continues to be a good yardstick of their performance—and the judgment is negative. 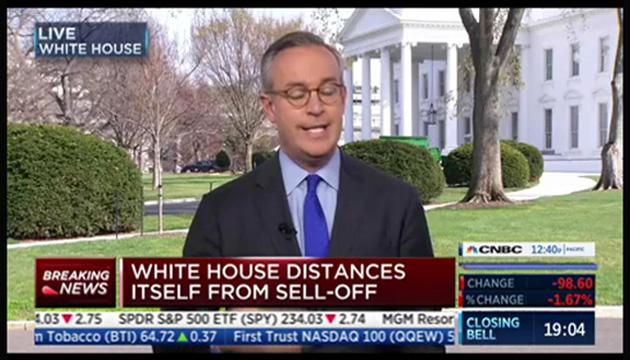 Granted, it’s not all Trump’s fault.

Investors got too enthusiastic about what Trump was capable of, bid up asset prices to unsustainable heights, and now that reality is settling in, stocks are going to have to find fair value. It might be a lot lower than here. Because the reality is, if you can’t get tax cuts passed under Donald Trump—when can you get them passed?

Allow me to point out that I did not predict this correction; I did not even attempt to. The best technical analysts can spend years of their lives looking at this and still be surprised when it happens.

What I have said is that the danger to the Trump rally was Trump himself. I have talked for a while about “good Trump” and “bad Trump,” and since the inauguration, we’ve mostly had bad Trump.

So why is everyone shocked when he turned out to be a fire-breathing populist after being sworn in? It seems as though investors collectively convinced themselves that Trump was something he was not.

Not that I think Trump wouldn’t eventually get around to cutting taxes. He would. It’s just not his top priority.

So I think everyone knows how this healthcare vote is going to go. Not well.

The stock market doesn’t like “Then what?” It doesn’t do well with open-ended risk. I think, at a minimum, the market could give back the gains since the election. That takes you back to 2100 in the S&P. That’s more than a 10% move—and it will feel worse than that.

It may be fruitless to try to prepare for a correction, but it’s irresponsible not to try to shore up the portfolio once it’s underway.

At this point, you have probably already heard about the Toronto Real Estate Wealth Expo, featuring Tony Robbins… and Pitbull. 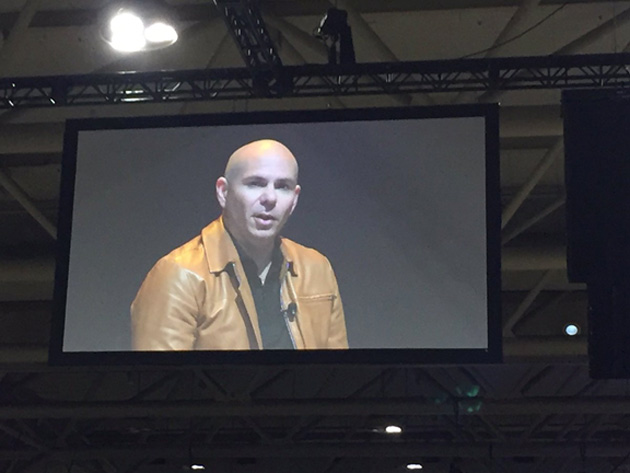 Suffice it to say, you can’t really ring a bell any louder than this.

I’ve weighed in many times on this topic in The Daily Dirtnap already—so let me just give you some reading material on the subject.

TorontoLife interviewed a bunch of people who were there.

If the housing market implodes, which I expect it will, it will probably not help Tony Robbins’ reputation.

Pitbull, on the other hand, will be just fine.

A Visit from the Doom Squad