1. Jeff Bezos became the second-richest person in the world, passing Warren Buffett. He’s
worth about $76 billion. 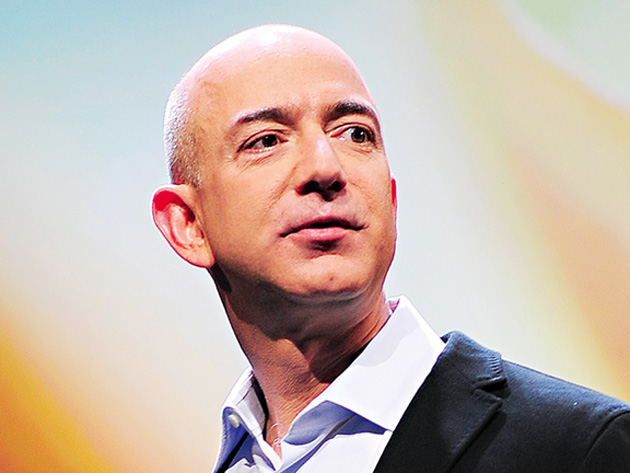 2. Tesla’s market cap surpassed that of Ford. For what it’s worth, Ford sells a lot more
cars than Tesla. Here’s a picture of Elon Musk (who was seen taunting the shorts on
Twitter the other day). 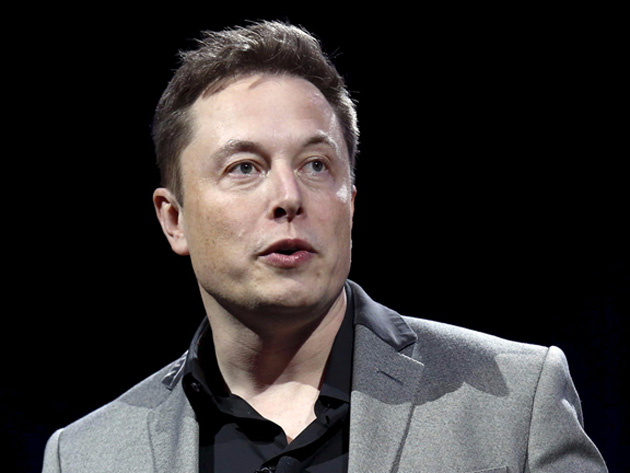 These two events are related.

The Hardest Shorts in the World

Amazon would seem to be an easy short. It doesn’t make any money. Don’t companies have to make money?

You would think so. I attempted this trade, shorting Amazon, back in 2012–2013… unsuccessfully. I was adamant that companies had to make money. I was wrong—but I didn’t understand why. At least I managed not to get my head blown off.

People also like to short Tesla, which also doesn’t make any money. It looks like it never will. Sure, Tesla is a bit of a cult stock: it’s hard not to root for a guy who builds actual spaceships and solar panels and runs three companies at the same time. But the Tesla shorts will also get carried out, for the same reason the Amazon shorts did.

I’ll give you a hint: it has to do with interest rates.

For both of these companies, the cost of capital is effectively zero. Would you be buying TSLA converts yielding 2.375% with a high strike if fed funds were 6%?

If you have ever taken a finance class, anywhere, anytime, probably the first thing you learned is the time value of money. Future cash flows are worth less when they are discounted at a higher interest rate. Ergo, when interest rates are low, businesses with cash flows very far out into the future can survive. 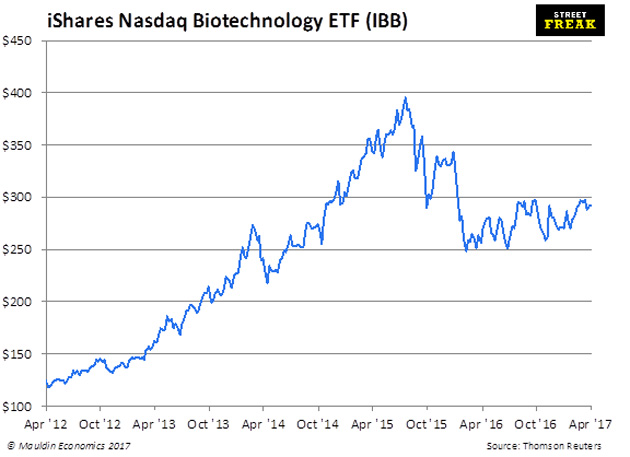 These days, biotech trades with politics, but for years, it was considered an ultra-long duration instrument—and was correlated with the bond market.

Amazon, of course, has been around for a while, since the mid-‘90s. But it really took off when the Fed lowered interest rates to zero and began quantitative easing in 2008 (almost to the day). 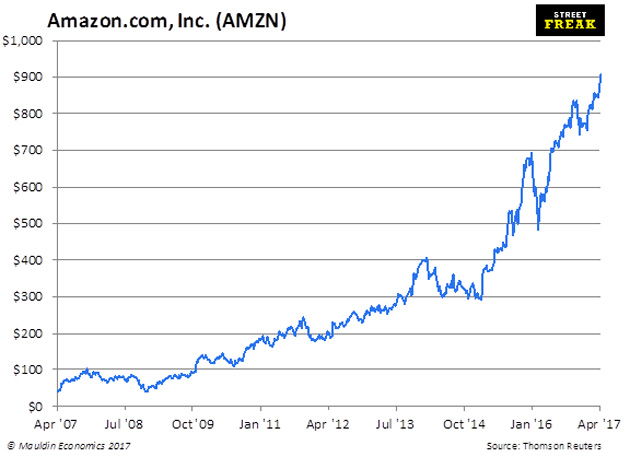 I can tell you one thing. If interest rates were at 6%, Amazon and Tesla would not be where they are today. The cost of capital would be higher, and there would be more compelling opportunities elsewhere, with lower risk.

Tesla would still be a $30 stock. And it would be expensive.

So If You Think About It

But Amazon and Tesla are part of those distortions, too. And think about how harmful those distortions are—think of the capital that has been diverted away from traditional retailers to Amazon.

An Amazon bull would say that this is justified: Bezos is a genius, and Amazon is the greatest company in the world.

But even the greatest company in the world perhaps wouldn’t even exist unless it had a zero (or negative) cost of capital.

Would we be denied Amazon with “normal” interest rates?

But here’s a broader, more philosophical question: Maybe this automation “problem” that we’re having, putting people out of work, wouldn’t even exist if it weren’t for the Fed.

It all comes back to the Fed. Everyone likes to beat up on the Fed—that gets old after awhile—but I have difficulty understanding how people like Neel Kashkari can’t see these distortions that arise from long periods of time with negative real interest rates.

Imagine a world without bubbles. It is actually possible. Just hike.

We will still get our Amazons and Teslas. Great companies will still come into existence. But people will have less patience. Which, perhaps, is a good thing.

That Is Not the World We Live In

But we continue to live in a world with very accommodative monetary policy. In this world, you can only trade TSLA and AMZN from the long side.

You can wait forever for profits when interest rates are zero. Not when they’re 6%.

You know when to short AMZN or TSLA? Maybe if the next Fed chairman’s last name begins with W and ends with “arsh.”

I get a lot of positive feedback on The 10th Man, which I appreciate. But wouldn’t it be nice to get this kind of insight every single day?

I’ve been writing The Daily Dirtnap for about eight and a half years now. A lot of people have come to depend on it. I make market calls—sometimes successfully, sometimes not—though occasionally people tell me I am a little too humble about my forecasting ability.

But that’s not why people read it.

People read it because it gets them to think differently. A longtime client of mine has called it his “mind vitamin.”

I’m also a bit of a polymath, so it’s not like we’re just covering the same five football stocks every day. It’s a go-anywhere letter, and I really go anywhere. Oftentimes into stuff that you’d think has nothing to do with markets (but does).

I also tend to be more buttoned-up in 10th Man, since it’s for a wider audience. You’ll get a few good laugh-out-loud moments in The Daily Dirtnap every week.

Mauldin Economics offers a money back guarantee, which I dislike. So you might as well take advantage of it. Sign up for The Daily Dirtnap and give it a try. Nothing to lose.

Jared, I love your free samples. Really good. I don’t think interest rates are the issue. I think counterfeiting currency is the issue. There is so much counterfeit currency it pushes down demand for currency so we get zero and negative interest rates as a result of counterfeiting. The Fed is flooding the future with counterfeit currency. This depresses all sorts of markets. How can I invest in bubbles that are caused by counterfeiting currency? The fed wants inflation at all cost. Inflation means more bank profits, more government taxes and more misery for Main Street as families are crushed with high fees, low wages, and high taxes. My daughter had a job for $50,000 a year, paying 40% income taxes and 50% of take home pay for rent in a down town apartment so she could walk to work. She pays $20,000 taxes, including all the hidden taxes, and pays $15,000 rent. She gets to live on $1,500 for her car, savings, expenses, living as a free slave. The system is broken. People are not having children to save money unless they are on welfare. So we import millions of new slave laborers who suppress wages for our own citizens. The Fed has destroyed America. End the Fed.

Indeed. Bill Gross has been making this point more and more insistently. You can’t flip the time value of money without wrecking the relationship between risk, time horizon, and return.

We live in a fantasy world. It will end when the Fed starts to shrink its balance sheet. That’s normalization.

I’m a CPA by background a very old background.  During that time I was mentored by a guy named Curt Symonds.  He was faculty at the AMA (M for management).  He wrote some great short books about ROIC (return on invested capital).  His advise was to management, but applies to the stock of their companies just as well.  The simple expression of this is captured in the his statement about the “capital” part of the equation.  He said, “All debt should be included in the capital part of the equation.”  Use that measure today and weed out all the companies with low returns on that basis.  All the share buy back and acquisitions acquired by debt, even with zero interest is pretty much guaranteed to kill you in the (not so) long run.

You may be right that Tesla is overpriced, but I think you are wrong about the reason.  They are not borrowing money
at anywhere near the low Fed rates.  Here is the real rate of their latest bond issue:
https://seekingalpha.com/article/4057151-teslas-cost-debt

Writing in 2017 that Amazon “doesn’t make any money” is like insisting that Obama was born in Kenya.  It simply isn’t true and repeating it over and over does not make it true, it makes you wrong.  Amazon has positive cash flow and net income and is profitable on a cumulative basis (having made more money in recent years than it lost in the earlier years).  It has more cash than long term debt.  And it has borrowed to actually invest in the businesses rather than to finance dividends and buy-backs as other companies have.

I’m not a huge Amazon bull.  I just get tired of people repeating false statements about the company to make a point when there are plenty of companies (like Tesla) that actually are valid examples that could make their point.  AMZN is an expensive stock, but Amazon is a profitable company with exceptional growth prospects.  I think that will still be true as interest rates rise.