Oil was at $28 on its way to zero. (It is possible for commodity prices to go negative—where you have to pay for someone to take it away. This is true for sulfuric acid, which is a byproduct of steelmaking.)

Now oil is at $42, crossing the 200-day moving average to the upside, and people think the bull market is back.

VALE was going bankrupt, at $2 and change.

There were similar near-death experiences, with stocks like Chesapeake Energy (CHK) and Transocean (RIG). All back from the dead.

China was supposed to be 2008 all over again.

High yield was really supposed to be 2008 all over again. Carl Icahn was in full panic mode.

Now, it’s ripping higher and funds are getting inflows.

A few months ago, people thought we were going into a deflationary depression.

Now, inflation is back!

(If you’re interested, I’m talking more about the “inflation trade” and other important topics in my latest video interview.)

The truth is always somewhere in between.

Having done this for a while, I’ve seen lots of Jekyll/Hyde impersonations from the market, but none this drastic. Truly, every single assumption people held about the markets in January has turned out to be 100%, completely, utterly wrong.

Only in financial markets can one thing be true in January and the complete opposite thing can be true in April.

You need a lot of personal qualities to be a good investor, but intellectual flexibility is very high on the list. In fact, you need to be so intellectually flexible that you can hold two opposing ideas in your head at the same time.

Very few people can do this. The idea that two opposite things can both be true—impossible.

I remember telling people a few months ago that there was every reason for the Canadian dollar to get weaker, fundamentally speaking—and that it would probably head higher. The following two things can both be true:

There are a lot of Wall Street people who don’t understand this. Someone asked me yesterday about Brexit, what I thought it would do to GBP.

The pound would strengthen, I said.

“That makes no sense,” he replied. The BOE would have to ease monetary policy to offset a weakening economy caused by exiting the EU. GBP should weaken.

“But,” I said, “everyone’s been hammering GBP the last six months on Brexit fears, and they continue to hammer it, so when they finally vote for it, everyone will be short and will have to cover.”

In fact, high up on my list of trades I want to put on is buying pound sterling about a week before the referendum. It will go up no matter what the result is.

The Apparent Contradiction of My Portfolio

I’ll give you a sneak peek into my portfolio, in very broad terms. I am:

People tell me this all the time. They say, “There is no possible way for both of those things to work at the same time. If 1) works, 2) won’t, and vice versa.

I have been pounding the table on the EM/gold/commodities/risk trade for months. People say, well, that means your Canada short will go up an uncomfortable orifice. And that is what has happened pretty much so far.

But remember intellectual flexibility: the idea that two opposite things can both be true simultaneously. Commodities can go up, and Canada can go down. It can happen.

The reason it can happen is because Canada can behave idiosyncratically if its housing market comes unglued. Prices were goofy seven years ago, and they’re many times more goofy today—just sheer madness. If there were a crash, the Canada short would work, in spite of commodities going up.

The same is also true of Australia and Norway.

This is how alpha is generated. If I am just long commodities and I get it right, I am not smart, I am lucky. I managed to successfully market-time something. That’s great, but big whoop.

If you have two opposite trades on and you make money, not only will you have generated alpha, but you will have done so by minimizing volatility. That’s the holy grail of investing, right there.

You would be pretty shocked at the number of professional money managers out there whose business plan is to pretty much market-time stuff. It is no wonder that hedge fund performance has been so miserable the last two years. There has been no trending market to time.

The vast majority of money that’s lost in the markets is lost because people are intellectually rigid. “That can never happen,” they say. Or they don’t even consider something to be within a range of possibilities. Then they are surprised.

I am rarely surprised anymore. This is a very good thing.

By the way, in case you missed it, here’s the link to the video interview again—just click on the screenshot below. 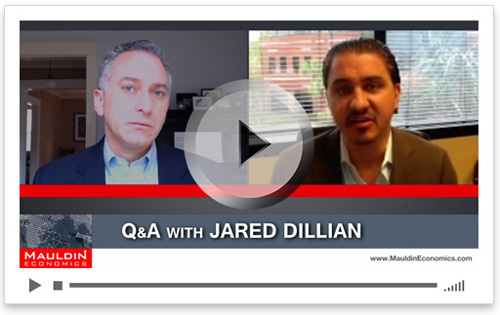 Great article.  It goes back to the real idea of a hedge fund: hedging.

This summs it up nicely (with commodities filled with any asset you want):
“If I am just long commodities and I get it right, I am not smart, I am lucky.”