In the September 22 issue of The 10th Man, I went through the math of how people would get screwed in a bond bear market.

I went through all the math, wrote about what duration was, gave some concrete examples of what would happen if rates backed up 100 basis points—and sure enough, since the election, rates have backed up about 40 basis points. This has meant heavy losses in bonds and bond funds. 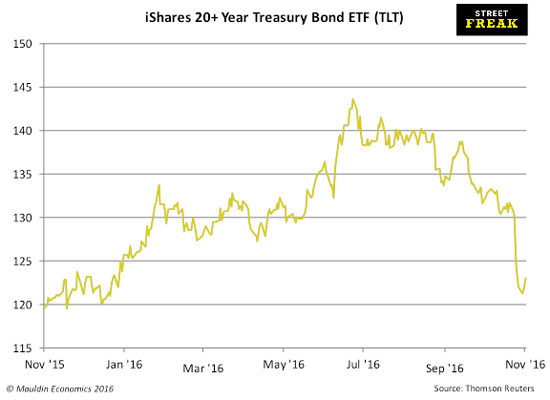 I will say with certainty: the bond bear market has begun. I will stake my reputation on it.

I’m not the only one saying it. Ray Dalio said it also, on LinkedIn, in a post that you really should read.

Ray Dalio, of course, runs the largest hedge fund in the world: Bridgewater, with well over $100 billion in assets. What Ray Dalio and Bridgewater do better than anyone else is study economic history. And what Mr. Dalio has identified is a very swift and sudden regime change—some of which we discussed last week, when we were picking sectors—but really, what this is about is that we are about to enter a prolonged period of higher inflation and higher interest rates.

Donald Trump has stated quite clearly—many times—that he wants to lower taxes and spend money… on just about everything. We will be running much larger deficits, which means more bond issuance at auctions—and what we are now seeing is the bond market responding to the threat of increased supply (and inflation).

If you don’t know how a bond auction works, I suggest you read up on it. When you understand how auctions work, you will understand intuitively the supply/demand dynamic that leads to higher interest rates. 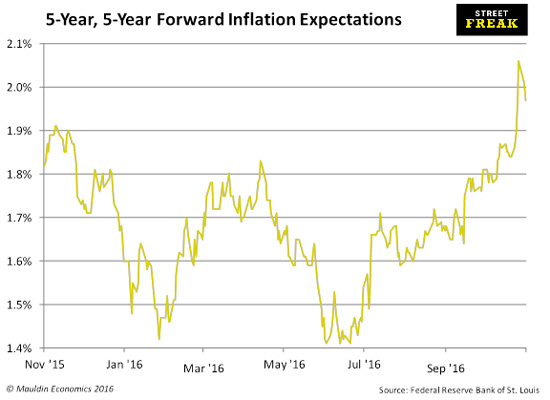 Which the Fed is watching for sure.

And right on cue, the second-most dovish member of the Board of Governors, Daniel Tarullo, is in favor of hiking interest rates sooner rather than later.

The timing on that particular change of heart has to be the most spectacular coincidence in the world (I’m being sarcastic).

A December rate hike is a given, but what the market doesn’t yet realize is that there will be multiple rate hikes in 2017. As in, more than one. Possibly many.

I Am Serious as a Heart Attack

If this is the beginning of a bond bear market—and I think it is—there will be consequences.

I’m going to stop there, but the implications go on and on.

Literally the whole world has exposure to higher rates. Sometimes it is easy to see where it lives (retail investors, today) and sometimes not (like Procter & Gamble in 1994). We are just scratching the surface here.

Remember what we said in Bond Math Class: when interest rates go up, stuff blows upTM.

In a few weeks, you’ll probably be reading articles in the Wall Street Journal about retail investors freaking out about the losses they’ve sustained in their bond funds, totally stumped about the relationship between bond prices and interest rates.

I’ve done my part. I’ve written quite a few times in the past about the bond bubble, and I devoted an entire 10th Man issue to the mathematics of bond prices.

I’m sure there are some people reading this, thinking: “Crap, am I too late?”

That is a particularly deadly psychological condition. You don’t need to sell the top tick. Anything close is fine. And this still qualifies as “close.” But I’m sure some people will experience paralysis and won’t sell, and watch helplessly as interest rates rise to 3% and higher, then sell their bonds on the lows.

This has been a very serious installment of The 10th Man. I’m a serious guy, at least when it comes to stuff like this.

A final note: We’re still collecting questions from our readers to improve my new ETF Master Class, so if you want to help and be on my beta team, please click here to enter any questions you may have about ETFs. (I can’t answer questions about specific ETFs, though.)

iBiotech is probably fine if Trump relaxes regulations on healthcare.

You’ve previously said you are bearish. With that view and the length of this expansion already getting quite long, how do you reconcile your view that the bear bond market has begun? Interest rates are historically low and will likely be so when the next recession it. Central banks have also shown they are willing to push rates negative and buy most of the debt that their government issues should the need arise. Isn’t it likely we have one last plunge in rates and swing at unorthodox monetary policies before we finally hit rock bottom… and it all ends in tears?