Poor Boston doesn’t know what to do with itself since the Red Sox started winning. For 80-odd years, the Red Sox were the underdog. Bostonians thrived on their underdog status. They blamed Steinbrenner, they blamed inequity, they blamed everyone but themselves for their problems.

Everyone knows what happened next. A hedge fund winner bought the team and hired some numbers guys and revolutionized the game, winning three World Series in the process.

Now, nobody in Boston cares.  They are unaccustomed to rooting for the favorite.

Boston raised underdog-ism to an art form, but as you travel around the world, it is the love of the underdog that prevails. Ever been to a pro tennis match? The crowd typically goes with whoever is losing. Look at the UConn women’s basketball team. They are so dominant that they have generated a huge backlash.

And outside of sports, we’re always rooting for “the little guy,” “Main Street,” the disenfranchised, the underprivileged.

It takes a different breed of cat to show up and root for the Yankees to win their 28th World Series, or to root for the UConn women when they are up 65-12 and pouring it on.

The first thing we need to do is to challenge and repudiate the idea of the moral superiority of the underdog—at least as it pertains to the business world.

I have a very good friend who is a real estate agent (prior to that, he was a public school teacher in a very impoverished area). When he became a real estate agent, he needed to choose a mentor who would guide him through his first five transactions. Early on, my friend would often complain about his mentor. He didn’t have his act together, he was often late, he wasn’t that smart, etc.

Finally I asked him: “If this guy is such a loser, why did you pick him as your mentor?”

That was when I sat him down. “This is the business world. You don’t pick the worst guy, you pick the best guy. Got it?”

Screw the moral superiority of the underdog.

Can you imagine what the financial markets would be like if we tried to invest in the worst companies, instead of the best? 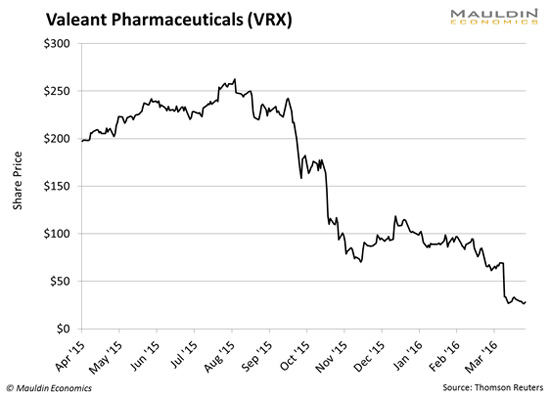 …they feel compelled to try and pick a bottom?

It’s betting on the underdog.

Valeant Pharmaceuticals is a loser company. It has a track record of losing.

Do you want to know why stocks trend? There are a lot of great reasons why it is difficult for trends to reverse. A successful company runs into trouble, demand for its products falls, this news hits the media and causes people to sell their stock, which causes analysts to ask questions about what is really going on and publish negative reports, which causes more selling. Pretty soon the rating agencies get involved and downgrade the debt, which causes forced selling, and so on. 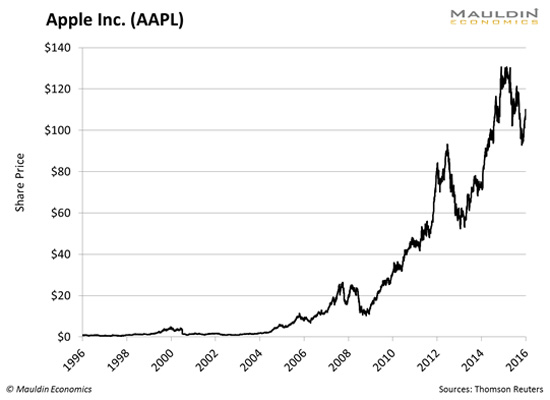 The one thing I have learned in all my years in capital markets:

When a company is going bad, it seldom gets better. And when I say rare, I mean extremely rare. That dog in your portfolio is very likely going to remain a dog. Or get worse.

It is different when you are talking about commodities, or countries, or commodity-related stocks. Turnarounds in commodities are more frequent because low prices stimulate demand and high prices stimulate supply. Also, in countries where things get really bad, people will get fed up and vote the bastards out, provided the political process still works. We are seeing this in Brazil and South Africa.  It already happened in Argentina.

But when you talk about corporates, the idea that you can bring in some rock star CEO to turn it around… almost never happens.

So when President Snow tells Seneca Crane in The Hunger Games that he doesn’t like underdogs, this is kind of a defining moment in the movie, right? You’re rooting against Snow because you can’t root for the favorite. What kind of movie would that be?

Can you think of a single movie that roots for the favorite? I can’t.

The moral superiority of the underdog is deeply ingrained in our culture. So ingrained that we have to unlearn everything we have learned in order to be good investors.

The way you get the losing guy to figure it out is to cut off the flow of money. Works for companies. Works for people, too.

Don’t forget to pre-order the Kindle version of All The Evil Of This World.  It costs $9.99.

I almost spit out my coffee when I read this.  Coming from a guy who’s last couple of stock recommendations are Wal-Mart, Vale and Cameco, you better go and revisit your process if you truly believe what you just wrote.

More likely, you, like all investors, think that they are smarter than the rest of the participants and can accurately pick bottoms.  I’m not saying you are or aren’t (I actually think you are smarter), but you, of all people, are not one to write about betting on winners.

I don’t know much about baseball, but I know that you couldn’t find a Patriots fan outside the North East in the 1980s, and ever since Brady they’ve multipled like flies.  What about Jordan and the 1980s Bulls? Truth is, most people want to be on the winnign team.  It is why people will often vote for the politician they think will win instead of the one they want to win.  One common reason for voting for underdogs is actaully becuase of spite: we want the favorite to lose becuase they beat our team.

In almost every movie, the main character is not an underdog.  Underdogs usually lose, where as movie “underdogs” almost never do. See slmost every superhero movie ever. Rooting for movie “underdogs” is like buying the beat-down stock of a company when you have bullish inside information (if that was legal).

Getting back to the subject at hand, there always seems to be conflicting advice.  You always here, “Buy low, sell high,” but this is in direct conflict of what you are advising, more along the lines of “Cut your losses and let your winners run.”  It seem to me that the best advice is to sell losers in hot markets and buy winners in pummeled industries. Valeant fits the first mold but I think and energy stock would fit the second.