Some of the dumbest arguments in finance are about interest rates.

You hear all of this convoluted nonsense about inflation and money supply and productivity. Yet it really comes down to just one thing:

Supply and demand for government bonds.

I acquired no transferable skills as a trader except for an intimate knowledge of how prices are determined. The stock market is pretty big, but I handled lots of orders that actually moved the market. Sometimes by a lot.

If you drop 3 million SPYs on the market, the stock market is going to go down. You learn this on a micro level, and it has macro implications.

What makes interest rates go up and down are large sell and buy orders for bonds, respectively.

This is why studying investment flows is a much better use of your time than staring at spreadsheets. If you can figure out where the money is coming from, and where it is going, you have your answer.

Bitcoin is somewhat of a special case because the supply is constrained. This is by design.

Bitcoin has no intrinsic value, except its scarcity. People use a lot of fancy mathematics to predict future Bitcoin prices, but it all comes down to supply and demand. The supply is mostly fixed, and the demand keeps going up.

The interesting thing about watching Bitcoin trade is that, well, there are sellers. 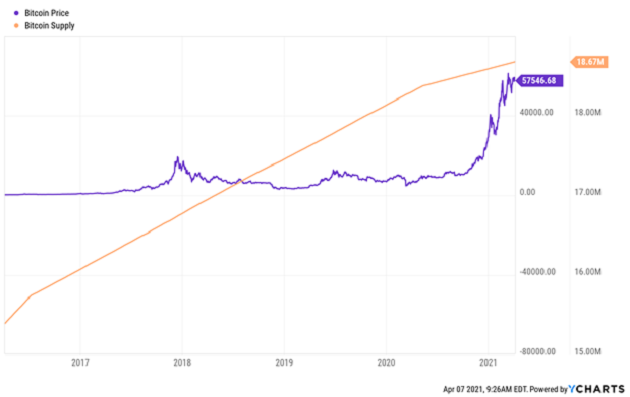 You have a lot of folks on Twitter who "HODL" and say that they will never sell. But someone is out there selling; you see it all day long. (10th Man readers know that I sold my Bitcoin.)

Higher prices bring out sellers. In the case of Bitcoin—which is a confidence asset, not a security—higher prices also bring out buyers.

My guess is that this dynamic will continue until there is an event that decreases the attractiveness of Bitcoin and brings out the sellers, like what is happening in India. (They banned crypto.)

Until that happens, Bitcoin keeps going. Unlike this firm…

One of the things that we are learning from the Archegos mishap is that Archegos was buying a lot of stock.

In fact, they were pretty much buying all the stock, which is why Discovery (DISCA), Baidu (BIDU), Tencent (TCEHY), Viacom (VIAC), Vipshop (VIPS), and others it owned kept going up.

"Underscoring the chaos of an escalating situation, representatives from Credit Suisse Group AG floated a suggestion as they met last week to confront the reality of such an exceptional margin call and to consider ways to mitigate the damage: Maybe wait to see if his stocks recover? Viacom, some noted, seemed artificially low after its run-up past $100 just two days earlier.

"Yet it was Hwang’s own orders that had helped make Viacom the year’s best performer in the S&P 500, forcing benchmark-tracking investors and exchange-traded funds to buy as well. Without him creating that momentum, Viacom and his other positions had little hope of rebounding."

As cash equity traders know, it is not hard to figure out who is pushing up the price of a stock.

Just like with government bonds, there are things that increase or decrease the attractiveness of stocks. But it doesn’t mean that people will buy (or sell) them.

I’m not a securities lawyer, but don’t front-run trades.

Last year, I made a pretty noisy call about the price of oil going up.

I said that supply was constrained—we had taken a lot of capacity offline, and that demand would be robust as the economy recovered from the pandemic and people began to travel in unprecedented numbers.

No spreadsheets. No charts. Just supply and demand. Stuff you would learn in a freshman economics class.

I guess everyone else was out partying and came to class massively hungover. This is how we get things like the minimum wage all wrong (again, supply and demand), and why we will try to cap interest rates.

Traders still struggle with a credibility problem post-Great Financial Crisis. You should listen to traders, though.

They know better than anyone how markets work. They know that price is everything.

If prices aren’t allowed to freely function, markets don’t work, and you get distortions. Which basically describes everything that has happened in the last year.

That's why John Mauldin is making this year's Strategic Investment Conference bigger and better than ever.

Like last year, this year's event will be all virtual. But for 2021, John and his team are hosting…

I'll be there, too. And I hope you'll consider joining me as we share our best insights and actionable ideas for the coming year.

If you reserve your virtual seat today, you can grab a 50% discount off the regular price.