The second trade I ever made in my life: Barron’s wrote about Texaco as a takeover candidate. I bought the stock. About a month later, Chevron (CVX) acquired Texaco. Free money for the kid.

The best thing you could say about a financial publication is that it has predictive power. So few of them do. Most newspapers or magazines talk about what is going on now, not what will happen in the future.

In fact, that is the job of a newspaper, to write about the now. It drives clicks.

In an attempt to write about what is hot and sweaty now, the media often inadvertently ends up marking the top (or bottom) of markets. Everyone knows this.

It’s the magazine cover indicator, and before that, the SI Jinx. By the time Sports Illustrated got around to putting an athlete on its cover, his career was over.

The funny thing is that magazines are aware of the magazine cover indicator, and they do this anyway: 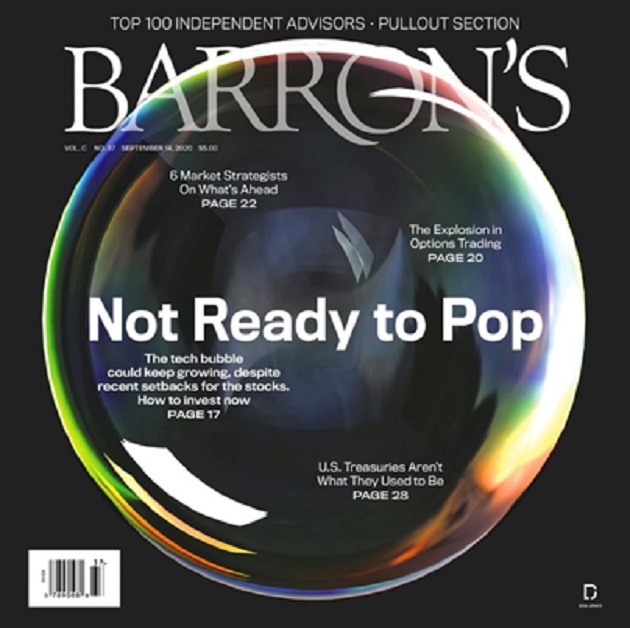 I think they’re just messing with us at this point.

Of course, The Economist covers are legendary as contra-indicators. My friend Brent Donnelly did an analysis of their covers going back many years and found that yes, a preponderance of them were contra-indicators.

He wrote in to the magazine with his findings, and they actually did an article on it. At least they were good sports about it.

To be completely cured of newspapers, spend a year reading the previous week’s newspapers. —Nassim Taleb

Anyway, in this particular example with Barron’s, they seem to be cognizant of the fact that everyone thinks we put in a top, and that printing a cover that says it’s not the top is probably going to make it the top anyway.

Personally, I believe that it’s the top, but it’s naïve to think that we won’t retest it at some point. Topping is a process, not a moment.

I do think people make a little too much of the magazine cover indicator nowadays. And there is some hindsight bias—looking in the rear-view mirror, there are some magazine covers that turned out to be contra-indicators. But many others didn’t. Something to talk about on Twitter, I guess.

I’ll tell you a quick story. March 17, 2008—the day that Bear Stearns went under. Sentiment was incredibly bad. Apocalyptic. Things couldn’t get any worse.

I remember getting a text message from an old friend from the P. Coast that night.

The next day I went in and did what is known as a call “tree” in the S&P 500 (SPX). It’s where you buy one call option and sell two more at higher strikes.

Basically, I was betting that stocks would go up.

Over the next three months, the news got worse and worse, yet the stock market went up 17%.

I can’t tell you how many people were perfectly positioned for the financial crisis, but were chased out of their trades by that rally. They missed the main event.

When things seem the worst, that is probably the time you should buy. Also, being short is hard—you get killed by the short squeezes.

What we just experienced in tech stocks was the mirror image of what happened in March 2008. There was a frenzy of speculation that we’ve never before seen in the stock market. If that was the top, how bad can things get?

The Object of Speculation

Large-cap tech stocks are the object of speculation. Once a top is put in, how big will the correction be?

One thing that people don’t understand about the dot-com bubble: While the broad market, as measured by the SPX, went down 50%, the NASDAQ-100 (NDX) went down 80%. And numerous stocks within the NASDAQ went down 99%—or disappeared altogether.

I was doing NDX index arbitrage at the time, and I remember the NDX getting into triple digits. And I remember that the bear market went on forever—it seemed to go down every single day.

The low was in July 2002, but the bear market wasn’t really over until March 2003—a full three years after it began.

At the highs, Apple (AAPL) was a $2.3 trillion market cap. It could be cut in half, and still be expensive. The same goes for all the other members of FANGMAN or whatever you want to call it. There is no valuation cushion.

In times like this, you want to buy things with a valuation cushion. Because if this really is the beginning of a bear market, valuations will compress.

Yes, I am talking about value stocks. I’m comfortable making that prediction here in The 10th Man—value stocks are headed for a long period of outperformance over growth stocks. And that is the sort of prediction that would have you laughed off the set of CNBC.

If you are ever looking for an idea, think of the idea that would get you laughed off the set of CNBC. These days, all they talk about are big tech stocks. We’ll see what they are talking about in three years.

The Election Trade Is Not Stocks

Never Really Get There