I was involved in a political discussion recently, after the death of Ruth Bader Ginsburg.

The other person, a liberal, said the Republicans should refrain from confirming a Supreme Court justice until after the inauguration.

He asked me, “What do you think they should do?”

I went on to say that the Republicans would probably confirm a new justice in the lame-duck session because of the myriad political forces pushing them that direction.

“But don’t you think that’s wrong, given that they held up Merrick Garland’s nomination?”

Oftentimes, I predict things that I disagree with. Most of the time, actually.

I recently went back through my Bloomberg Opinion editorials to see the types of things I’ve been predicting since 2017. At least 80 percent of it has come to pass. That is what you can achieve when you don’t let your personal feelings get in the way of your predictions.

I never knew what confirmation bias was, but once I learned about it, I see it everywhere I go.

I’ve written before about not letting personal feelings get in the way of your predictions. I am pretty sure nobody listened to me. Ninety-nine percent of people conflate what they think should happen with what they think will happen.

Who knows—that may, in fact, happen. But it’s yet another example of confusing will and should.

That example is an interesting one, because there is zero evidence to support the claim that Trump will win in a landslide. Biden is ahead in the polls.

Now, there is evidence that Trump voters are systematically undercounted—it happened the last time around—but it doesn’t get you to “landslide.”

I figure it’s about a coin toss, which is actually the worst-case scenario—the scenario that I am positioned for in my portfolio.

Speaking of other improbable events, let’s talk about energy stocks.

Energy stocks aren’t doing so well, which is a classic understatement. 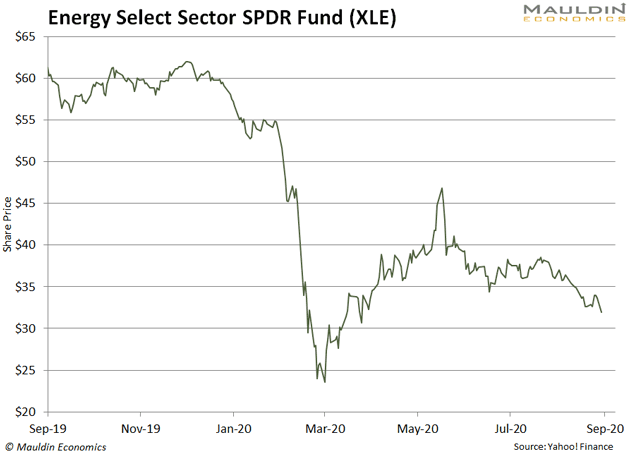 A few days ago, British Petroleum came out with its own very dire predictions for energy demand. The company is rapidly diversifying into alternative sources of energy, as are a lot of other oil majors.

We’ve had newspapers and magazines predicting the death of fossil fuels. And now we have this: an S&P 500 ex-fossil fuels ETF. Interesting time for that product, no? When energy stocks are on the lows?

Also, the CBOE just listed options on something called the CBOE S&P 500 ESG Index. The hits just keep on coming.

If you are unemployed these days, my suggestion is to start a business as an ESG consultant. Your services would be in high demand.

I have zero evidence that energy stocks will go up. There is all the evidence in the world that they will go down.

And yet I believe that energy will be the best-performing sector of the next 5–10 years.

I am in the business of predicting what will happen, not what should happen. It’s a simple matter of supply and demand. Once we get to the other side of COVID, demand, which had dropped by 20%, will pick up dramatically. And supply will be constrained as the entire sector pivots away from fossil fuels. Who knows—if Biden gets elected, maybe he bans fracking.

But if you dislike fossil fuels because of climate change, you probably think they’ll continue to go down, and eventually disappear. But then you would be predicting what should happen, rather than what will happen.

Predicting that energy will rally is a bit like predicting Trump will win in a landslide. There is no evidence for it, but it is the outcome that would surprise everyone the most, which is usually what happens. (It probably goes without saying, but I have investments that are positively exposed to energy stocks going up.)

My favorite vignette in Nassim Taleb’s book The Black Swan comes from some consulting work he did for a casino.

The casino spent vast sums of money on surveillance trying to catch cheaters. But the PNL swings from a few whales vastly outweighed whatever green chips the card counters were making off with.

All the big risks to the firm came from outside its sophisticated models.

2020 has seen one of the greatest stock market crashes of all time, and perhaps the greatest recovery. None of this, including a killer virus, was in any equity strategist’s end-of-year prediction.

We should be focused on what will happen, rather than what should happen. And we should pay attention to when the market compensates us with odds for statistically improbable events.

If Trump wins in a landslide, I hope nobody is surprised by it, whether you wanted it to happen or not.

I am the silent majority. Not one of my Trump friends have been called or polled to ask our opinion but you know what we all vote. let the land slide begin.