That sounds terrible, but it’s really not if you look at the big picture.

Double-entry accounting includes flows of both goods and capital. The current account deficit (another name for the trade deficit) is simply the other side of a capital account surplus. The two always reconcile to zero—hence the name, “balance of payments.”

Nonetheless, the Trump administration doesn’t like trade deficits, so they must be reduced or eliminated. To do that, we need Chinese consumers to buy more “Made in the USA” products.

Problem is, China has little need for US-manufactured products, beyond the agricultural goods it already buys. They would buy certain things we refuse to sell them, like defense technology.  What else can we send? 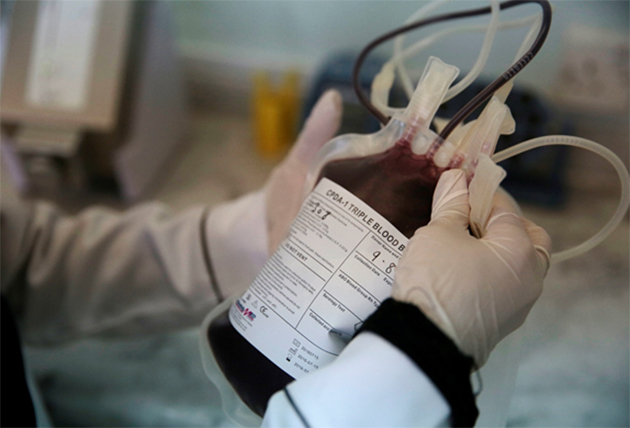 Everything about China is big—including its health problems.

According to the World Health Organization, about 100 million Chinese have some form of chronic hepatitis. That’s one in 13 people.

Hepatitis can lead to liver cirrhosis and liver cancer, so this is a serious problem. Treating it requires serum albumin, a substance found in human blood plasma. As the Financial Times reported last week, Chinese patients consumed 300 metric tons of serum albumin in 2016, approximately half of the global total.

Now, while the necessary supply could be provided by the Chinese population, many of them are afraid to donate blood. The reason is a well-remembered 1990s health scare in which tens of thousands of farmers who had been paid to donate blood acquired HIV from unsanitary needles. The ensuing scandal was covered up by the government.

As a result, China has to import about 60% of its serum albumin—and the ever-rising demand has driven up prices.

Hepatitis patients are not the only buyers, either. FT reports:

Widespread misconceptions about blood injections as an elixir of youth have also boosted Chinese demand. “Some Chinese people have an unscientific idea that human albumin is a nutritious product, and some wealthy or privileged consumers such as retired officials demand it,” said Xu Xianming, an administrator at a Shanghai hospital.

This “unscientific idea” may not be unscientific at all, by the way. In recent years, some Western scientists found that injecting older test subjects with a certain protein found in youthful blood can delay and possibly even reverse the effects of aging. Animal studies have already been vastly successful.

But I digress. In any case, it’s probably bullish for serum albumin prices if wealthy Chinese want to buy large amounts. 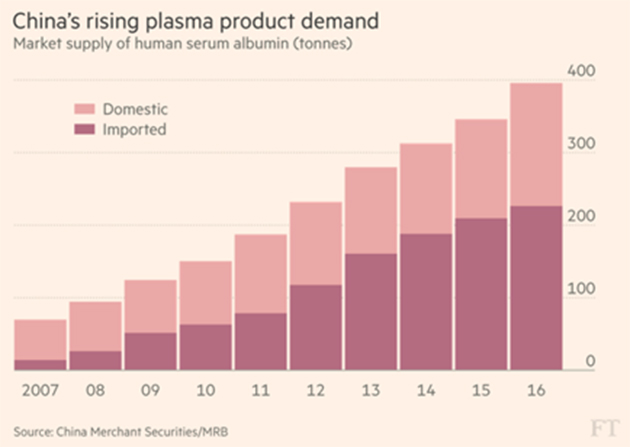 According to the Financial Times article (FT subscribers can read it here), three foreign companies currently account for 88% of China’s serum albumin imports. They are:

(Disclaimer: This is not a stock recommendation. Please do your own research before you buy any of these.)

Interestingly, even though CSL is an Australian company and Grifols is from Spain, all three collect most of their plasma in the US. That suggests we have some natural advantage.

Total US blood plasma collection was 31,000 metric tons last year, compared to only 7,000 metric tons collected in China—even though China has four times as many people.

Clearly, Americans have an edge in this business. We could amplify it by ramping up blood plasma collection to keep pace with rising Chinese demand. This would help reduce the trade deficit and might have other benefits too.

To give blood, you must be in generally good health. That may incentivize donors (who are often paid for giving blood) to avoid unhealthy lifestyle choices, which in turn could result in lower healthcare expenditures as a side benefit.

Another advantage: blood plasma offers high value for its volume and weight. One refrigerated container might be worth more than an entire shipload of grain, for instance. We’d be able to boost exports with minimal extra carbon emissions.

Every business plan has to ask, “What could go wrong?”

In this case, one obvious risk is competition. Americans aren’t the only ones with blood to sell, so other countries could underbid the US.

In addition, researchers in China and elsewhere are working on artificially produced serum albumin. One Chinese project using rice seeds has proven safe and effective in initial trials.

These are indeed risks, but I think they’re minimal for now. The US can maintain its edge as long as we maintain high quality. 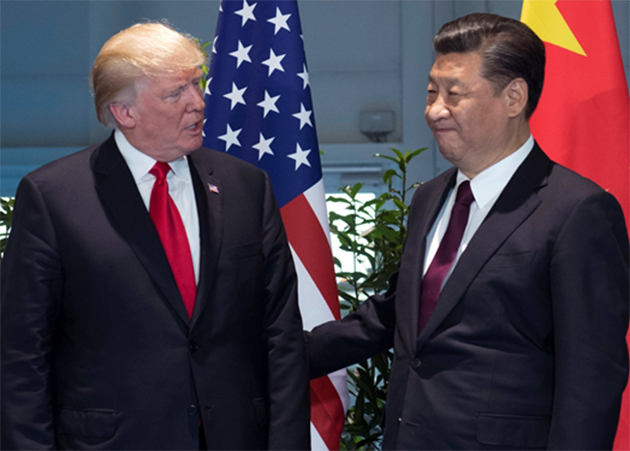 President Trump loves to make deals. I think this is a natural one he could negotiate with President Xi.

Regular readers know I’m very concerned about the Trump administration setting off an economically destructive trade war. I hope it doesn’t happen, but I think investors should prepare for it.

International trade doesn’t have to create winners and losers. Voluntary exchange is good for everyone.

What a wonderful idea! Instead of producing valuable products, we can become donor animals.  We sell our body parts in exchange for goods manufactured by our Chinese economic superiors. For a long time horses have been used to make tetanus vaccine. No reason to be so speciest about it. Of course, there will be domestic managers (suitably compensated) who will run the operations of domestic animals for the true masters of the planet.

But why stop there? Chinese need other body parts as well. I’m sure there’s even more profit for Patrick Watson’s class brokering liver and kidney sales.

I like the idea!!  I think that there is another good reason for Americans to donate a lot of blood. That is, it takes quite a bit of energy for one’s body to produce all that extra blood. (The is part of the reason women notice that their metabolisms have slowed after menopause.) I once spent a bunch of time on the internet trying to find an estimate for how many calories it would be worth if the body had to replace a pint of blood. I thought my local gym could promote the idea as an additional weight loss idea. I could not find any estimates. Someone must know!  Given that Americans are mostly too fat, we can get a bit healthier while we help the US economy.

Not the only surprise, but when I learned that people in the US are paid to ‘give’ blood, I was astonished. Where I live, we do it altruistically as a sort of good neighbourly act to help others in crisis. It is called ‘donating blood’. Just as the individual human who sells their blood seems to be desperate for financial survival….......I have the same chilly feeling that in this case this also applies to their country.
Also, to quote ‘They would buy certain things we refuse to sell them, like defense technology’. Strangely, the US does not seem to produce ‘offence’ technology, not even ‘military’ technology.

So, billionaires get filthy rich bringing in cheap Chinese goods, creating super-marts, killing off the local competition, manufacturing and jobs. For Billionaires’ there is no such thing as a ‘Trade Deficit’, since they are country-independent, and spread their money to off-shore banks everywhere. For the dumb suckers who buy this crud (ie, me), we are taught to be responsible, hard-working, patriotic, sacrificing in the name of ‘Country’. So, rather than stop buying Chinese poison, or setting up the same barriers they have against us (red-tape) and enabling U.S. Manufacturers as fighting chance, this author wants us to ship our blood to China.
Doesnt create jobs. Doesnt improve your health. Its not fun.
Bottom line: You’re buying crap, stealing your friend’s jobs, and then paying for it with your blood, getting weaker and dumber.
John Mauldin long ago suggested we let Chinese buy homes.  That creates jobs here, boosts home prices, and brings our capital back to the USA ... and essentially brings with it the commitment of the Chinese to ensure their adopted homes do well.  (imho)

I wouldn’t assume that your community’s local blood drive is the same blood that gets exported for profit. The exporters have their own supply chains. But, it’s sure worth asking before you donate.