Everyone is worried about robots. Elon Musk fears they will kill us all if we give them both deadly weapons and autonomy.

He certainly has a point, but the non-lethal scenarios are no picnic either. Robots are already taking over human jobs at a rapid pace. Any work involving predictable, repetitive activities is vulnerable.

This is a troubling combination.

What happens when those two get together?

Answer: the problem grows exponentially. To see how, consider the humble school bus. 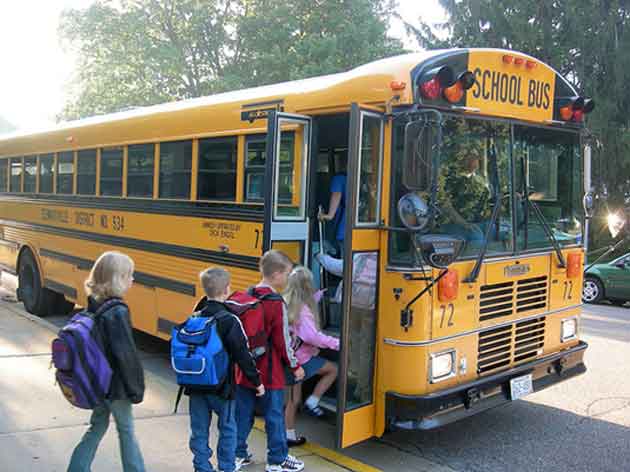 There’s a classic math exercise called the Traveling Salesman Problem. The goal: find the shortest path through a series of cities before getting back to where you started.

Sounds simple, but it’s maddeningly complex. Even a short itinerary can have millions of possible routes. Finding the fastest one is hard.

Local school officials in Boston recently realized that this problem was costing them big money: to be precise, a whopping $120 million a year to transport students. Looking to save money, the school system offered a $15,000 prize to whoever could figure out the most efficient bus route map.

Two doctoral students at nearby MIT won the contest. The algorithm they designed eliminated 75 bus routes while still delivering all the students. It will save the school system $5 million a year—a whale of a return on $15,000 invested.

Note how this works. Boston doesn’t need fancy new self-driving buses to cut bus driver jobs. The routing algorithm doesn’t just replace jobs; it eliminates them. Having done so in Boston, it can now do the same in other places.

Even the bus drivers who keep their jobs may not be safe for long. 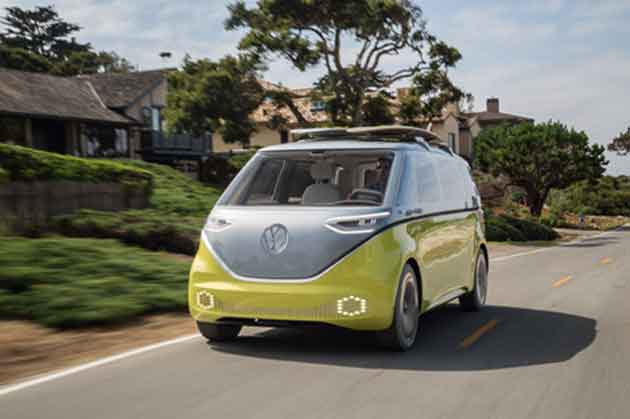 Remember the old VW micro-buses? Volkswagen said this month it’s bringing the concept back with a new, all-electric version called the I.D. BUZZ. You’ll be able to buy one in 2022.

Aside from being battery-powered, the I.D. BUZZ will also have autonomous driving capability. Volkswagen intends to make a cargo version. They think it will be ideal for delivering small packages in urban areas.

If it can deliver packages, it can also deliver public-school students, or anyone else who needs to get from point A to point B… and it won’t need a driver.

Tesla, Uber, Google, and others are developing similar driverless vehicles, which will be ready in the next few years. Any job that involves driving will be vulnerable—and not just passenger vehicles.

Tesla founder Elon Musk tweeted this back in April:

Musk sometimes gets dreamy on his predictions, but this one may be real. Earlier this month, Reuters obtained emails between Tesla and Nevada state officials. Tesla wants permission to test autonomous electric trucks on Nevada’s highways.

As part of the test, the autonomous trucks will move in a “platoon” formation, with one truck following only inches behind the next. Human drivers could never do that safely, but computers can. It also saves battery power by reducing drag.

Now, add these two together:

The first part is happening right now—with school buses, delivery routes, and more. It doesn’t need any new technology or permission from regulators.

The second part is coming fast. According to Reuters, Tesla wants to test the trucks without a human backup driver aboard, which suggests they may be further along than most observers thought.

Either development by itself would do away with hundreds of thousands of human jobs. Together, they have a multiplier effect that could speed up the process considerably.

How many jobs precisely are we talking about? The US has 1.8 million heavy truck and tractor-trailer drivers, according to a new Richmond Fed report. Add the 685,000 bus drivers, the 859,000 local delivery drivers, the 189,000 taxi and 160,000 Uber drivers, and multiple millions are at risk.

We have seen such technological revolutions before. One example is bank tellers and ATM machines. There was a lot of fear when ATMs appeared in the 1970s, but they turned out not to kill jobs at all.

Or the drivers might stay in the loop. Think about airliners. The computerized autopilots can do almost everything from takeoff to landing, yet planes still have human pilots aboard. Why? Because we trust the technology… but not completely.

We won’t know until a few years from now which direction this development will take. One thing I’m sure of, though: once these capabilities exist, they won’t disappear. People and businesses will find ways to use them.

These potential job losses are both an economic and a social problem. Given time, the economy will sort it out, but meanwhile people will experience real pain—and political leaders will have to find appropriate responses.

As an investment matter, automation and robotics is reaching a kind of critical mass. In our analysis for Macro Growth & Income Alert, my co-editor Robert Ross and I have long stopped asking whether machines can do all these things and started wondering how it will work and how to profit from it.

A good place to begin is with the two ETFs that cover this sector:

ROBO launched in October 2013, and BOTZ came out in September 2016. Both are up more than 30% since the later one’s inception. 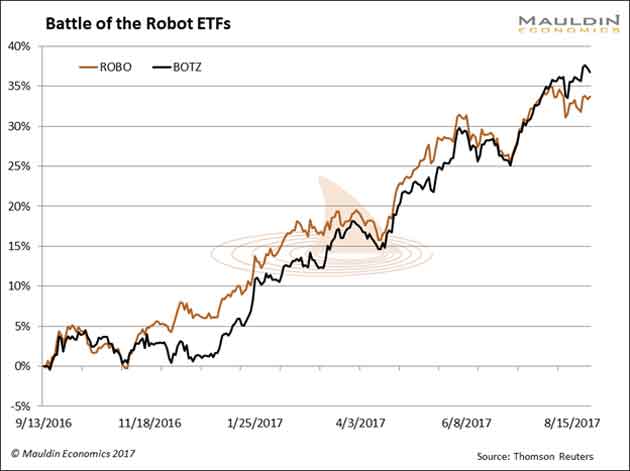 The AI/robot revolution is still in its infancy, so I think more gains will come. More volatility too.

The ETFs are an easy way to get broad exposure whereas buying individual stocks lets you fine-tune the risks to fit your personal goals.

We’ve been following this theme in Macro Growth & Income Alert for a while now, using both stocks and options. Selling put options generates current income for our subscribers, since many growth stocks don’t pay dividends.

However, investing isn’t always about growth or income. Sometimes it’s about survival. If automation threatens your job, having your portfolio benefit from it may help hedge your career risk.

To Willis and Sanjib below, please see my company website at www.futura-automation.com where I maintain a blog discussing this very same issue.  Robots and AI will eliminate 90% of work within 30-40 years (in my lifetime).  We are just beginning this revolution.  It started in 2009 as the recovery from the RE Bust got underway.  Manufacturers decided to replace fixed overhead workers with robots in the subsequent economic recovery.  Obamacare just exacerbated the issue in America, but this is a global phenomena with low cost labor countries like China, Vietnam and Mexico greatly increasing their use of robots the past 10 years.  In fact China now leads the world by a large margin in implementation of manufacturing robots.

This will eventually result in the need for Universal Basic Income (UBI) which is really already underway.  This looks something like the current welfare for those who cannot recover a lost job.  Welfare must take on a more positive connotation like UBI and should be accompanied by a requirement for some positive contribution, helping other people in some way, in the form of Peace Corps and a renewed Americorp (a JFK program).

To pay for UBI and other government services, production must be taxed, a Value Added or General Sales Tax.  There will be too little personal income that can be taxed to finance the government and its services.  To tax production is better than to tax robots themselves.  It introduces the same economic problem as income tax: taxation on capital.  Robots and AI are very capital intensive, more so than human workers.

If robots are taxed, it will only discourage improvements in productivity and increase balance of trade disparity.  From an American economic perspective, automation should be encouraged as it will happen with or without support.  If American policy discourages automation in a vain effort to protect jobs, the production will just move to another shore exacerbating trade deficits and the ultimate collapse of the American economy.

Most commentators skip over the fact that robots and ai systems do not buy anything and do not pay taxes.  One consequence of these facts is that when a worker loses his job to technology, his/her salary does not get spent in the community buying things so one to three additional jobs (depends on the size of the salary of the worker) are lost on average.  The worker and these dependent workers stop paying taxes until they find new jobs.  The IQ of many of these people limits the options for training them to do the replacement jobs that are available.  So, we should cut taxes on corporations to compound the problem.

In his treatise “In Praise of Idleness”, Bertrand Russell envisages a future where increased productivity allows everyone to enjoy more leisure and higher living standards. Unfortunately, what has happened is that increased productivity has led to job losses for some while others work too many hours leading to lower living standards for everyone. Why can we not have the same number of bus drivers paid same as before while working less number of hours?

We have been automating tasks for 150 years or more. The rate of change has been increasing the whole time. In the past, as one job disappears, others are formed. They may take different training, but they are there. To survive, you need education, and reeducate yourself as things change. The people who lose out the most are the 50+ whose jobs go away. Yes there will be pain. If you made buggy whips, you days were numbered once the car was available. We need to continue to put people to productive work, improving the lives of all of us.

Figuring out the most efficient way to get from A to B is a good first step. A good second step is consolidating the last mile delivery of packages. There is absolutely nothing proprietary about handing or dropping a package off. Fedex, UPS, Post Office Purolator etc.. should consolidate their delivery. That way you would have one truck visiting an apartment building and not multiple trucks. You would have dramatically fewer trucks driving fewer miles dropping off packages. Really good for the environment and traffic. The post office, Fedex, Amazon and UPS come to my Condo everyday.