Some things you just don’t question. For American workers, Social Security is one of them. You pay into it your whole career, and you expect to get paid when you retire. No politician dares say you won’t.

Now, if the politicians were honest, they would tell us not to bet on Social Security… or Medicare, for that matter. Both programs are unsustainable without major changes no one wants to make.

Yet as it stands, the retirement income and medical benefits millions think they already paid for aren’t going to happen. It’s a sticky problem—one that won’t get better by itself. 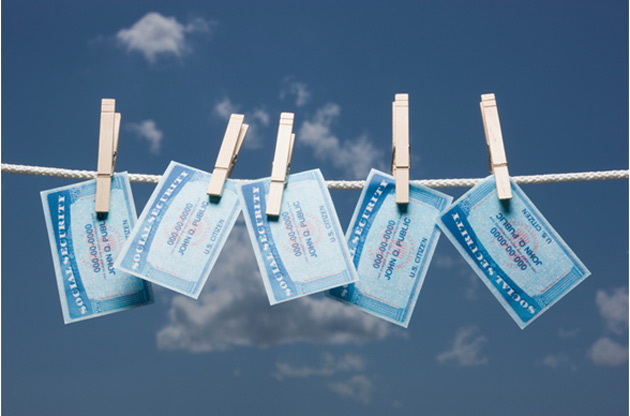 Every year, the trustees of the Social Security and Medicare trust funds issue a financial status report. (By the way, these are not “trust funds” in any normal sense. There is no pile of money reserved for your retirement. Congress spends the cash on other things and will eventually have to find tax revenue to repay the trusts.)

According to this year’s report, over its 83-year history Social Security has collected roughly $20.9 trillion in taxes and interest. It has also paid $18 trillion in benefits, leaving $2.9 trillion in trust fund “reserves,” which, as noted, are not really reserves, but let’s use their terms for a minute.

Something unusual will happen in 2018. For the first time since 1982, Social Security’s total cost will exceed its income this year, and this time the trustees project it will keep doing so, as far as the eye can see.

To keep paying benefits at current levels, Social Security must therefore start drawing down those reserves. But eventually they will run out too—with estimated depletion by 2034.

Medicare is in a similar pickle. The hospitalization program (Medicare Part A) will deplete its reserves in 2026. That’s three years earlier than the trustees projected just last year. 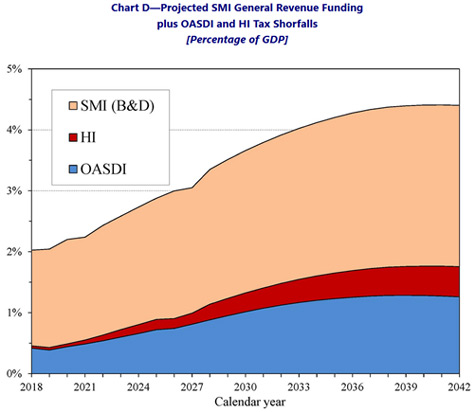 This is a drag on the economy and will only grow as more Baby Boomers reach retirement age.

Last year, Social Security and Medicare were 42% of federal program expenditures. As they grow, either taxes must rise, or other spending has to go down, or the debt will get even further out of control.

This is really just a cash-flow problem. After the trust funds run dry, we’ll need to match Social Security and Medicare’s expenses with their income. We can accomplish that by reducing expenses, raising revenue (i.e., increase taxes), or a combination of both.

Raising revenue means higher taxes. That could happen, but it probably won’t be enough.

We can reduce expenses by either cutting benefits or making fewer people eligible—both politically difficult. People believe they “earned” it, but in fact, they didn’t.

Yes, money came out of all your paychecks labeled for Social Security, but it’s not like insurance. You have no contract with the government. Receiving Social Security is not a constitutional “right.” It doesn’t matter that you think you paid for it.

A mostly forgotten 1960 Supreme Court ruling, Flemming vs. Nestor, said the fact that you paid into Social Security creates no obligation for Congress to give you anything back. They can cut benefits to zero if they want to. Your only recourse is to vote them out.

Now, Congress probably won’t do that, because they know we would vote them out. But they’ll have to find some solution. If raising taxes and cutting benefits are both off the table, what’s left?

The least-bad alternative is to raise the retirement age. Congress previously did so back in the 1980s, in tiny steps that topped out at 67 for those (like me) born in 1960 or later.

In one sense, this is only fair. Life expectancies were much lower when they made 65 the full retirement age. People collected benefits for only a few years before they died. Many never collected at all. Now people routinely live into their 80s and 90s.

Look, not even Franklin Roosevelt would have agreed to a program guaranteeing all citizens a 20+-year non-working retirement with government-paid healthcare. That was never the idea, but it’s what we have right now.

The Social Security outlook would vastly improve if we raised the full retirement age to 72 or even 75, starting soon. It really is the easiest, least painful answer. Today’s 75-year-olds are in the same or better health than 65-year-olds were in the 1930s. So that’s what I think Congress should do.

(If this is the solution, I’d hope they keep an earlier retirement option for people who legitimately can’t work—which should be less common as physically strenuous jobs are automated.)

Which leaves the question: What will you do? 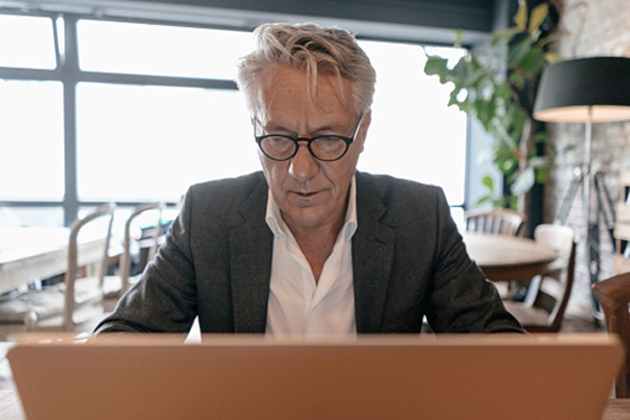 Another reason for raising the retirement age is the best solution: It’s happening anyway. More and more Baby Boomers reach 65 to find they can’t afford to stop working. Others can afford to retire, but they just enjoy their work.

As I wrote last year in How to Work in Retirement and Love It, this isn’t necessarily bad. The key is to have enjoyable work that suits your physical condition.

And, as I wrote last week in To Save the Economy, Don’t Retire, applying retirees’ skills and experience that currently go untapped could boost the economy, creating more and better jobs for younger people.

This idea isn’t perfect. But the present finger-pointing and worrying are getting us nowhere. Raising the retirement age is a bullet we may have to bite.

For context, I’m 26 and a self-employed investor.

I would simply scrap the program for anyone born after a certain date, perhaps 1980. This system just won’t last - look at the Federal balance sheet using accrual accounting. I’m certainly not planning on having SS income around when I retire and it is foolish for anyone less than 50 to think so too. I’m also sick of paying into a system that won’t even benefit me. From the time of the Great Depression until now we’ve had ample years to solve our debt problem and they never did. Quite likely someone my age (b. 1991) will be the ones to have make very difficult decisions and scrap the program and suffer the consequences when that time comes.

I am already planning to work to 70+ but I’m not sure about 75… BUT! I think you are missing the 900 pound retirement gorilla.  I don’t think the government will dare raise the retirement age for JQ Public while allowing government workers to retire at 50 with 80% of salary… while raising our taxes to pay for the unfunded government retirement “trust funds”.  But those pension funds are already broke right now!

I’ve been trying to think it all the way through, and a likely scenario would be for all the government pension obligations to be dumped into Social Security and Medicare, and don’t they DARE complain to us about it!  After all, what can they really do about it, go on strike?  Ha. Ha.

THEN, while we are all busy with our schadenfreude, they can slip in the higher taxes and higher retirement age at the same time.  We would barely notice.

Net results, we would all be unhappy in the same boat together.  Just like Socialism always provides.