The “Phase 1” US-China deal is signed, sealed, and delivered. Phase 2 is in the works but won’t happen any time soon. Investors celebrated anyway.

They’re not entirely wrong; Phase 1 represents some incremental progress and, for the moment, may keep the trade war from intensifying. It also handsomely rewards certain favored parties.

That’s about all the good news.

Phase 1 isn’t an economic game changer. Americans are still in a worse position than they were before President Trump launched the trade war, and this deal doesn’t repair the damage already done.

Here are seven reasons to hold your applause. 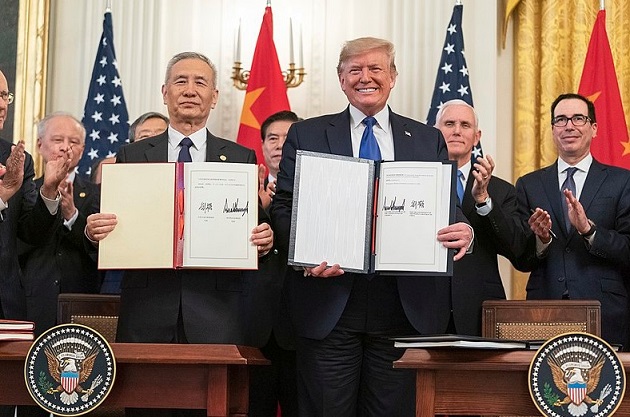 #1: The Ground Is Still Moving

Tariffs are manageable if businesses know what to expect. That’s not how Trump operates. He uses uncertainty as a negotiating tactic. He believes keeping the opposition confused gives him an advantage.

Unfortunately, it confuses innocent bystanders, too. If you are an import-dependent US company, you need to know your input costs with reasonable certainty—not just now, but a year from now.

They still don’t have such certainty, since everyone knows Phase 1 could easily fall apart or Trump could target other countries. So businesses remain reluctant to make capital investments and expand capacity. This reduces economic growth.

#2: Tariffs Are Still Higher Than Before

Before Trump launched this trade war in 2018, the average tariff on Chinese goods brought into the US was 3%. Now it is 19%, and that’s after Phase 1’s relief. And those rates apply to almost two-thirds of all Chinese imports.

Let’s also note, tariffs are a tax on American consumers. China doesn’t pay them, you do.

You’ve already paid a lot, you will keep paying a lot, and you aren’t going to get a refund… unless it will help buy your vote. Then you may see a few bucks.

#3: The Battle Will Shift Elsewhere

Media reports call Phase 1 a “ceasefire” or “truce,” but the firing hasn’t ceased. It’s not a truce when the warring parties simply agree to shoot smaller bullets at each other.

Meanwhile, we have other trading partners, and a president who likes using his trade powers to accomplish other goals.

This month, for example, the Trump administration threatened to impose a new 25% tariff on European automobiles unless Germany, France, and Britain cooperate on Iran sanctions.

Every industry must still wonder when it will get dragged into someone else’s fight. The trade war isn’t over. It’s just relocating.

To meet those targets, US farm production will have to grow considerably, and/or we will have to sell goods to China that would have gone to other countries.

We won’t know for a long time if this deal actually helps US farmers. But lower sales in 2018–2019 definitely hurt them.

#5: GMO Provisions Could Give Away the Farm

In the short run, this might help US farmers who produce GMO grains. But it might also give China the same biotechnology that lets US farmers produce higher-yielding crops. The Chinese could then grow products they now import.

Unlike other trade deals, Phase 1 has no arbitration clause. What happens if disputes arise, as seems likely?

Well, the two sides will start with “bilateral consultations.” If that doesn’t work, they’ll have higher-level consultations. If they still can’t agree, the complaining side can retaliate however it wants. The other side can’t respond except by withdrawing from the entire agreement.

That means the US and Chinese governments will probably ignore lots of small-potatoes cheating that isn’t worth scuttling the whole deal. If it’s your small potatoes, you will just be out of luck.

If you think socialism and economic central planning are bad ideas, you should hate Phase 1. It promotes both.

Consider those agricultural purchase commitments. Exactly how will the Chinese government keep that promise? Beijing will simply order companies to buy US products, whether it makes business sense or not. Phase 1 depends on exactly the kind of “state control” the US ostensibly wants China to abandon.

This deal is, as one analyst called it, “Communism with American characteristics.” It compromises core American principles for short-term financial and political gain.

I could go on, but you get the point. Phase 1 isn’t going to help either country’s economy much. The trade war is still on. Nothing in Phase 1 gives US businesses reason to make long-term capital investments.

That means 2020 will probably bring more of the same: low economic growth that is trending even lower.

Low growth is better than no growth, of course. But we missed a turnaround opportunity.

Worse, any of several brewing crises could cause major problems.

Then there’s the president’s impeachment trial. While the Senate will probably acquit him, we should wonder what else might emerge afterward.

This Ukraine/Biden thing came out of nowhere just a few months ago. Something else could, too. And it might not be in Washington.

Totally agree.  And it doesn’t address the problem of “state capitalism” (an oxymoron) where China Inc (banks, legal, regulatory, intelligence agencies + financial support) are matched against each western company.  It’s ludicrous to say this is ‘fair competition’.  Entire lines of business in western companies have disappeared, in majority part because of China’s state capitalism with shielding of domestic companies to ‘acquire’ technology and build economies of scale.  (This is also a reason a current account deficit matters long term, for a particular industry type.)  My reading of the agreement is it does nothing to address this, mostly to insure China will purchase more products ... that they would have needed anyway.  It is hard to argue selling more agricultural products generates a competitive advantage.