We’ve learned a lot about COVID-19 since the pandemic started. There’s still no cure, but we have better treatments. Highly effective vaccines seem to be coming, too.

All this is the result of scientists following the scientific method: collecting data, forming hypotheses, testing them, and making adjustments. It’s a slow process but it works.

Economists, and economics writers like me, should do the same.

Many of us expected the economy to worsen as the virus affected more people. That’s what happened initially. But now, with the virus causing more health damage than ever, the economy isn’t weakening as badly as expected.

Maybe this is about timing, and the economy will falter more as winter unfolds. But I think something else may be happening.

From the beginning, some have argued we should just get on with life, learn to live with the virus, etc. I never liked that approach. But like it or not, it may be what we’ve chosen.

If so, we could see two seemingly incompatible outcomes: a stable (or even growing) economy and mass death.

In other words, a Burial Boom. 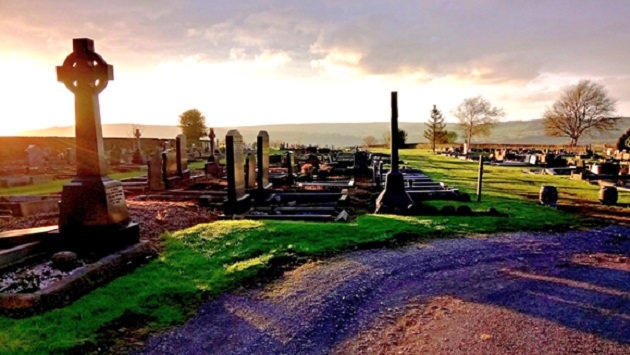 Last May, as governors began lifting the various restrictions they had imposed, I wrote in The Great Reopening Gamble that the future depended on two variables.

Combining those two gave us four possible paths, illustrated in this matrix. 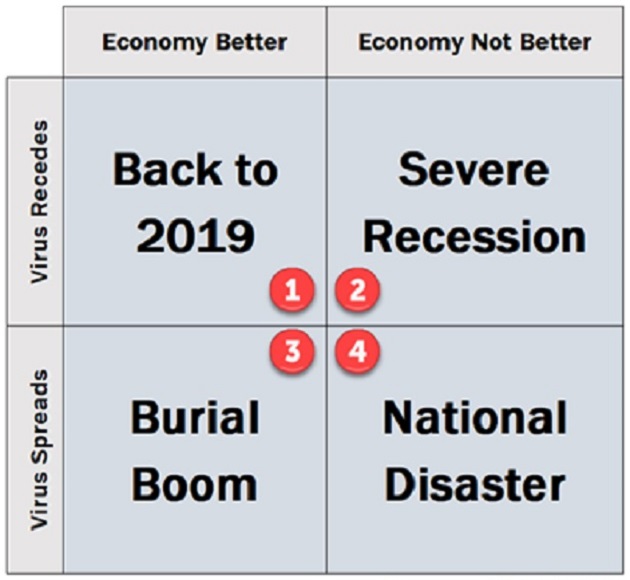 That was in May. In July, with virus cases rising quickly, I said in Will America Accept the Worst? that we could rule out scenarios 1 and 2. The virus was clearly not receding, so the only remaining question was whether the economy would improve.

A raging pandemic at the same time as a severe recession would have given us #4, a national disaster. But it hasn’t exactly happened that way.

The economy isn’t great. Millions are still unemployed, some sectors like restaurants are devastated, and people are hurting. Still, by many measures, it bounced significantly over the summer, though not back to where it was.

The same is happening now, even as COVID-19 cases grow rapidly. My friends at Gavekal recently highlighted the disconnect in these two charts.

How do we reconcile this?

One possibility: The economy will drop again after a brief lag. Governors and mayors have been ordering more restrictions in the last two weeks. It may take a little while for any impact to show up in the data.

But I think a better explanation is we’re in different conditions now. The weakest businesses have already failed and laid off their workers, so we won’t see another wave like the one last March (though many are struggling, and could yet close).

Likewise, companies have learned how to work remotely. They’ve cut costs and reduced inventory. So future shutdowns, if they happen, won’t be as expensive or disruptive.

Another factor is that this pandemic hasn’t hit everyone the same way. Many are doing just fine. Well-paid professionals who can work from home haven’t lost income, and are redirecting the money they would otherwise have spent on travel and entertainment to different items. This helps other parts of the economy.

In fact, household liquidity has improved even at the lower end, though some of it is due to government programs that recently ended, or will end soon. 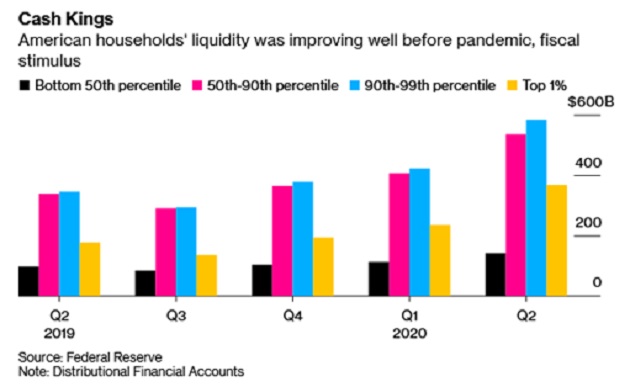 Again, I’m not saying the economy is great. I’m saying it’s not nearly as bad as I thought it would be, given the pandemic’s continued carnage.

We aren’t, at least so far, seeing the “national disaster” scenario. And that leaves one possibility.

As I write this, the US COVID-19 death toll is over 260,000 and rising. As of a few months ago, I thought this would provoke national grief and outrage. It hasn’t.

Instead, large numbers of Americans are going about their normal lives, unbothered by those deaths, or by the risk they or a loved one could join the casualty list. How is that possible?

Well, denial isn’t just the first stage of grief. It is a powerful cognitive bias. Our brains don’t process mass trauma very well. As one psychologist said, “The more who die, the less we care.”

When I first described those four scenarios last May, I said a spreading virus + expanding economy would generate jobs in the mortuary industry. I meant that as dark humor… but now it’s actually happening.

In El Paso, Texas, the local medical examiner is trying to hire temporary morgue attendants to help process the hundreds of bodies presently stored in large freezer trucks. The jobs pay between $15 and $27 per hour.

We (or at least our elected officials) have decided business must continue no matter how fast the bodies accumulate. They’d rather just hire people to clean up the mess. I don’t think this is sustainable, but it’s where we are for now.

The burial boom is underway. We’ll see how long it lasts.