Over in the United Kingdom, where energy prices are a growing problem, climate protestors have been throwing soup at Van Gogh paintings. Others in Germany glued themselves to a museum floor, demanding an immediate shift to 100% green energy.

I’m as concerned about climate change as anyone. However, solutions that leave millions to shiver and then go bankrupt aren’t helpful. This challenge needs better answers.

First, we need clean, abundant energy sources that don’t depend on the handful of countries who control most of the oil and gas supply.

Second, we need to make that transition while maintaining adequate, reasonably priced supplies of the fossil fuels on which the world presently depends, and for which alternatives aren’t fully ready.

Doing both is difficult, in part because oil and gas companies have little incentive to invest in future capacity when they aren’t sure anyone will buy it.

There might be a way to walk this tightrope, though. It’s not ideal and has risks. But it’s actually happening… and few have even noticed. 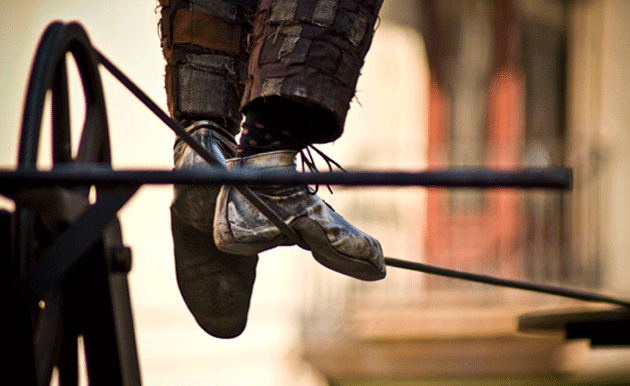 Whatever you think about the oil industry, it does certain things very well. The companies know how to find energy deposits and bring them to the surface at surprisingly low cost. This fueled (literally) a century of economic growth that produced our modern living standards.

Yet this process—producing fossil fuels, transporting them where needed and then burning them to power our machinery—has increasingly problematic side effects, and not just environmental ones. Oil and gas are geopolitical ace cards. They put enormous power in sometimes malevolent hands, leading to wars and death.

Developing sustainable energy would be a good idea even without climate change. Governments are trying to nudge along the market forces that will eventually make it happen. But how to manage the transition?

If you run an oil company, you have to think long-term. Developing a new deposit takes a long time and a lot of capital. You need to know years in advance that you’ll be able to sell what you produce at a profitable price.

Today’s industry leaders remember spending loads of money early this century only to see oil prices crash in 2014‒2015, thanks to Saudi manipulation. They don’t want to risk that again. Today’s higher prices don’t remove the fear prices will be lower in 2025 and beyond.

If there were a way to remove that concern—to assure the companies that they can sell their future output profitably—they would have a reason to make the necessary investments.

The Biden administration has been releasing crude oil from the US Strategic Petroleum Reserve (SPR). This has helped reduce gasoline prices, although at the cost of reducing the country’s emergency reserves.

SPR releases affect both today’s supply and tomorrow’s demand. At some point, the government will buy more crude oil to replace this year’s releases.

In the past this was done at current market prices. The Energy Department started a rulemaking process back in July that will let it buy oil at long-term, fixed-price contracts. That apparently led to this Oct. 19 White House press statement (my emphasis in bold):

“[T]he Administration intends to repurchase crude oil for the SPR when prices are at or below about $67‒$72 per barrel, adding to global demand when prices are around that range. As part of its commitment to ensure replenishment of the SPR, the DOE is finalizing a rule that will allow it to enter fixed-price contracts through a competitive bid process for product delivered at a future date. This repurchase approach will protect taxpayers and help create certainty around future demand for crude oil. That will encourage firms to invest in production right now, helping to improve U.S. energy security and bring down energy prices that have been driven up by Putin’s war in Ukraine.”

In other words, the government intends to buy large amounts of crude oil for future delivery at $67‒$72 per barrel. Perhaps not coincidentally, those prices are in the range energy industry executives said earlier this year will make new drilling profitable. This was from a March Dallas Fed survey: 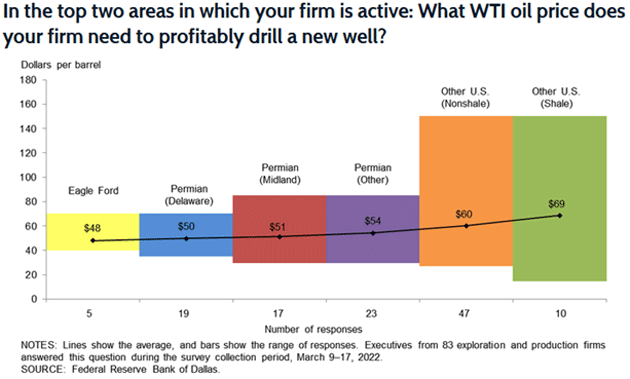 The government is essentially offering the oil industry a “put option.” Whatever the market price is, the companies who take these contracts would have their prices locked in. The White House hopes this will incentivize more domestic oil production.

This may seem like a win-win arrangement, but details matter. The oil companies and the government will have to negotiate. Reaching terms that work for both sides may not be so simple.

Cost matters, too. The government could actually turn a profit if it sells oil from the SPR for more than it pays to replace the oil. But it could take losses as well, which wouldn’t be good for an already-giant national debt.

It’s also not great to have government intervening in commodity prices. The politicians in charge can use that power in unhelpful ways.

On the other hand, the government has been intervening in agricultural commodities for decades. Various USDA programs have probably raised grocery prices, but we do it anyway because having a reliable domestic food supply serves our national interest. A reliable domestic energy supply is equally important.

Other governments are already manipulating oil prices. Saudi Arabia, Iran, Venezuela, Russia, and other oil-producing countries collude to promote their own interests.

Maybe the US—which is now a top energy producer and exporter—should play that game, too.

Because I think we can probably win it.