Many 2020 market forecasts say politics will be a key factor this year. The US is starkly divided between parties with radically different policy agendas. How this election turns out will have serious economic consequences.

Yet we face more than two possible outcomes. And there’s one potentially shocking scenario nobody seems to be considering.

You may get the opposite of what you want.

Thinking through the political scenarios is really a math exercise. We have three institutions (House, Senate, and presidency), each controlled by one of two major political parties. They matter individually, but the way they split control matters even more.

Two parties and three entities mean 23 or eight possible combinations. Here they are: 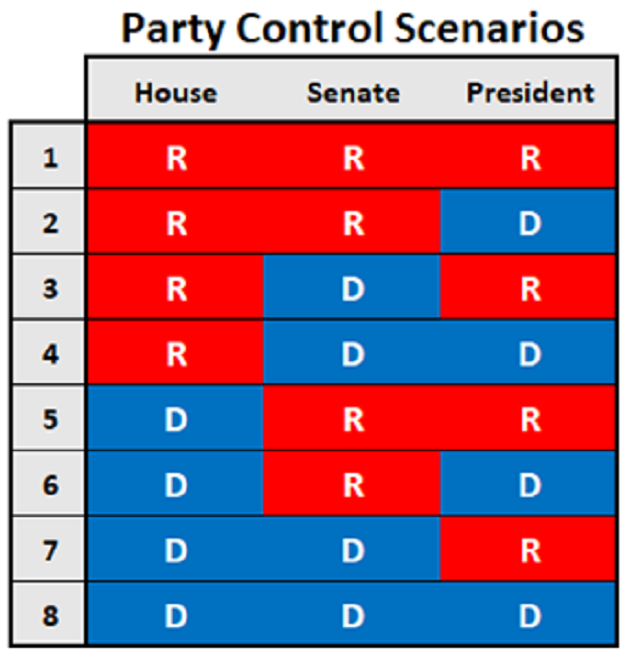 Let’s review what could happen.

Scenario 1 prevailed when Republicans controlled the House, Senate, and White House for President Trump’s first two years. We know what that was like. We can expect similar policies in 2021 if the GOP retakes the House and Trump is re-elected.

Scenario 2 would have a Democratic president paired with a Republican House and Senate. That was the case for most of the Obama years. Possible, but right now seems unlikely.

Scenario 3 is also unlikely. The kind of wave that re-elects Trump and turns the House red again probably wouldn’t turn the Senate blue.

Scenario 4 is similar. It’s hard to imagine the country electing a Democratic president while also turning a bunch of House seats red. But stranger things have happened so don’t rule it out.

Scenario 5 is what we have now: Democratic House, Republican Senate and president. It could easily persist if voters decide they like the present leadership.

Scenario 6 is what we’ll get if Trump loses but the House and Senate keep their current majorities. The Democratic president will have a hard time getting any legislation passed, just as Trump does now. But he/she would have the additional hurdle of getting a GOP Senate to confirm his/her nominees.

Scenario 7 would mean Trump wins reelection, Democrats keep the House and win back the Senate. That’s possible if the president gains an Electoral College victory with a few key states.

Scenario 8 is the “blue wave” Democrats hope to see. Its likelihood depends how the country likes whoever they nominate for president, which we don’t know yet. But with high turnout in the right places, it could happen.

So what does this tell us?

As noted, Scenario 1 would look a lot like Trump’s first two years. If Republicans stay united, they could make drastic changes in many programs. And they probably would stay united, since the more moderate Republicans who derailed some of the agenda have departed.

Scenario 8 would be the inverse of Scenario 1, with Democrats in full control. Think Obama’s first two years, when they passed the Affordable Care Act.

Scenarios 2–7, with control divided between the parties, would probably bring more gridlock. Don’t expect much major legislation to pass. But our various problems would continue worsening, so maybe at some point they would find compromise solutions.

Or, in one scenario, it might be more than “maybe.”

Let’s think about the #7 case more closely: Trump gets his second term but faces a Democratic House and Senate.

Doing this would require Democrats to keep the House and flip a net four Senate seats. Not easy, but possible.

Trump’s job won’t be much fun if that happens. What will he do? 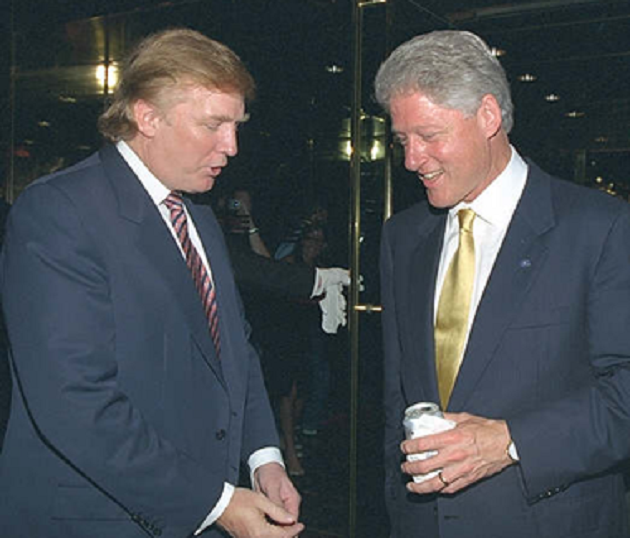 Remember: Trump isn’t a conservative, and never has been. He has no ideology. He just likes making deals.

“Look, just sign the bills we send you. Your base will like some of them. In return, we’ll go easy on the investigations and not impeach you again. You can spend the next four years taking credit for all the jobs our infrastructure plan creates.”

Would Trump take that offer? Maybe not—but he has a long history of abandoning onetime allies. Republicans shouldn’t think they are exempt, particularly if they lose the ability to protect him.

This is the scenario almost no one imagines: A second-term Donald Trump signing tax increases, national health care, student loan forgiveness, gun control, environmental protections, and all the other things Democrats want. Appointing liberal judges, too. And old-school Republicans powerless to stop him.

Crazy? Probably so. I wouldn’t bet on it happening. But it could, and that’s the definition of “tail risk.”

The president you think will save you from far-left ideas might be the one who delivers them.