I heard all those conclusions in the last few weeks as President Trump ordered tariffs on US trading partners and threatened even more.

That’s the wrong question. Trade war isn’t a light switch you flip on and off. It’s more like a big room with hundreds of dimmable lights, and the possible combinations are endless.

Trying to simplify complex situations, we often lose full understanding of them. We miss the nuances, and the nuances can matter—a lot.

So, to see the whole picture, skip the “either/or” arguments and enter the world of “both/and.” 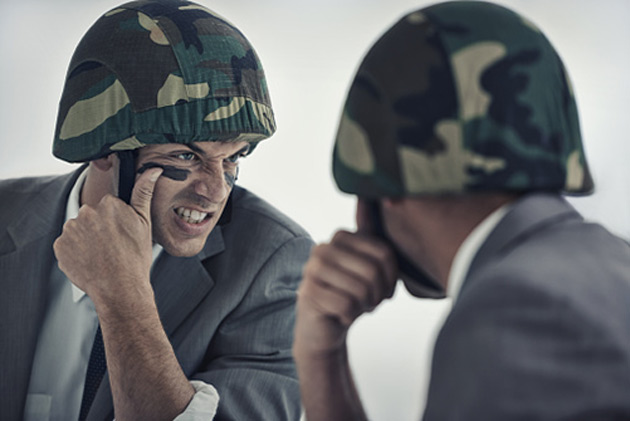 Between Bad and Terrible

I read a lot of economic research while editing John Mauldin’s Over My Shoulder service. Recently, we sent subscribers three important trade-war analyses. Each highlighted an important detail that was lost in the news coverage.

The first was from Dr. Woody Brock of Strategic Economic Decisions. He agrees that trade war fears are behind much of this year’s market volatility and could get worse. At the same time, he thinks comparisons to the 1930s Smoot-Hawley tariffs overdone:

Dr. Brock estimates a significant trade war in today’s economy would reduce Gross National Income by about 2% over three years. That’s far less than the 8% drop Smoot-Hawley caused in the 1930s.

So, if we get into full trade war, it won’t be nearly as bad as the best-known historical precedent. That’s good news. But remember, think in “both/and” terms.

Trade wars now can both…

Those aren’t conflicting conclusions. Both can be true… and we may soon find out what that looks like. 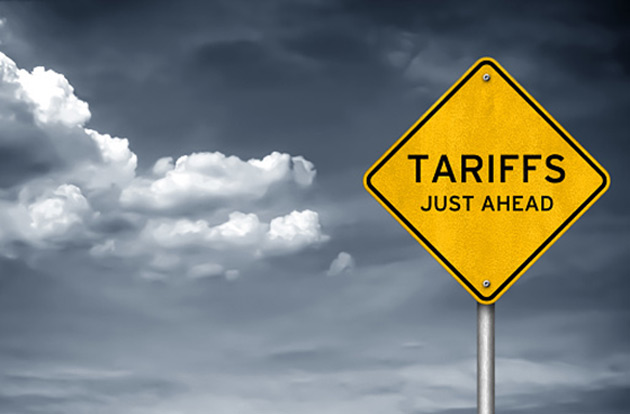 In early June, we sent Over My Shoulder subscribers an issue of Danielle DiMartino Booth’s Daily Feather. Her jarring title: This Is Not A Drill, The Trade War Is Live.

Booth looked at global trade data and saw a significant slowdown coincident with President Trump intensifying his rhetoric in March.

This chart tells the tale: 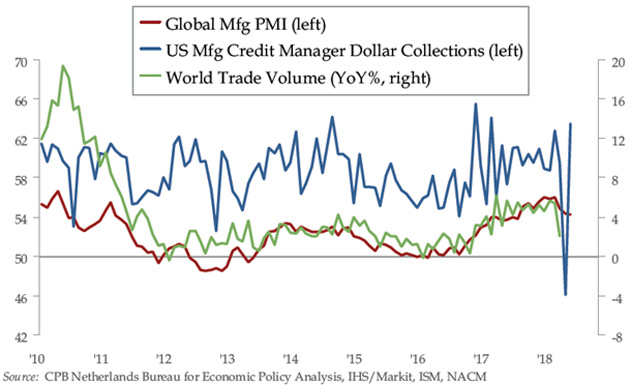 The credit manager reports are particularly important. They reflect real-time repayment estimates by businesses that keep a close eye on their incoming cash collections.

Timing is important here, says Booth. Right at the end of May, Trump announced he would impose steel and aluminum tariffs on Canada, Mexico, and the European Union… all of whom promised to retaliate.

That, plus subsequent anger at the G-7 summit and actions against China means June data should give us a solid look at the way businesses are reacting to tariffs and other trade changes. Watch for reports in early July.

The data I see suggests we are entering a significant trade conflict. What we don’t know is how much trouble it will cause. So far, the actual impact is far less than the angry words suggest.

Arthur Kroeber of Gavekal Research addressed this in another report we sent Over My Shoulder subscribers this month.

Kroeber believes US tariffs won’t make China change its industrial and intellectual-property policies, nor will the Trump administration back down. That means gradual escalation is almost certain. 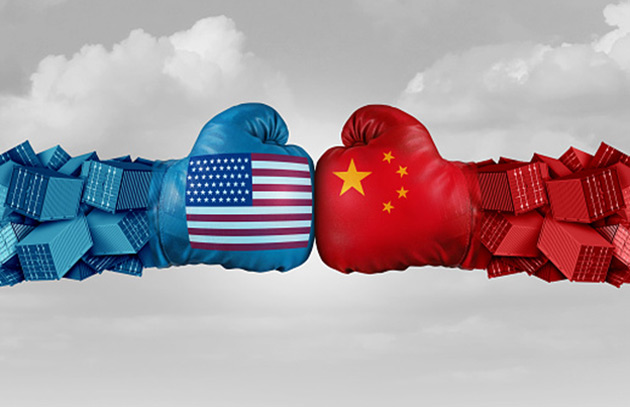 He also points out that the presently strong US economy will mask tariff impacts, making Trump’s protectionism appear to be working, or at least harmless. Neither is correct, and we will notice quickly if the economy weakens.

That doesn’t mean the worst. Kroeber identifies three signposts we can watch for further clarity:

Depending how those develop, trade war fears could either ease or intensify in the next few months.

But even if the president starts sounding conciliatory, the tension probably won’t disappear. Markets have learned that Trump can turn on a dime, without warning.

And no matter what he does, the last 50 years of globalization will keep losing momentum and eventually reverse. Today’s technology no longer supports it. That economic megatrend preceded this president and will continue after he’s gone.

In other words, the broad trend is away from free trade and toward increasing protectionism and local production. However, the path from here to there is highly uncertain, and it matters to your investment strategy.

John and I are tracking this closely in Over My Shoulder and would love to have you join us. Click here to learn how.