“Fake news” has become a buzzword, especially connected to social media. Which becomes even more worrisome in light of the recent scandal about Facebook’s shady data-sharing and advertising practices.

But we haven’t seen anything yet. Because thanks to the latest technological breakthroughs, reality itself—or at least our understanding of it—could be at stake.

But let me tell you about coal mining first. 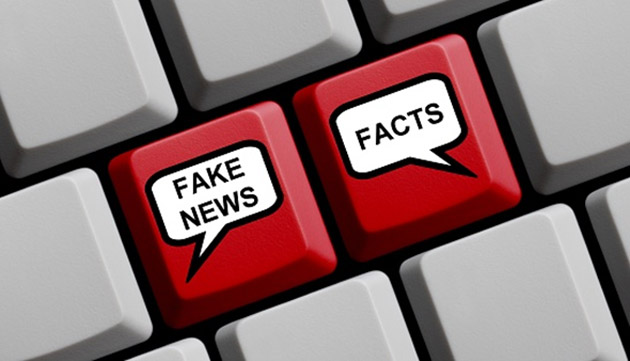 The Canary in the Virtual Coal Mine

Last year, I wrote about my (ahem) unusual experience trying a virtual reality chat service at the South by Southwest conference. You can read it here: Reality Gets Too Virtual at SXSW.

Back then I wrote, “VR technology appears to have outpaced the ability to produce good VR content.” That gap is closing. This month I saw dozens, maybe hundreds of filmmakers showing off their VR productions at SXSW 2018.

And when you equip artists like film directors with a new tool, they take it in unpredictable directions, combining low-tech and high-tech to create entirely new capabilities.

For instance, I tried a coal mining VR simulation developed by WDR, a German broadcaster. It portrayed the experience of entering a coal mine from 100 years ago.

To do this, you wear a VR visor and headphones… but that’s not all.

Those simple little tricks aren’t virtual. You feel actual vibration, weight, and heat that enhance the VR sights and sounds, creating a kind of “mixed reality.” Here I am all geared up for the mines. 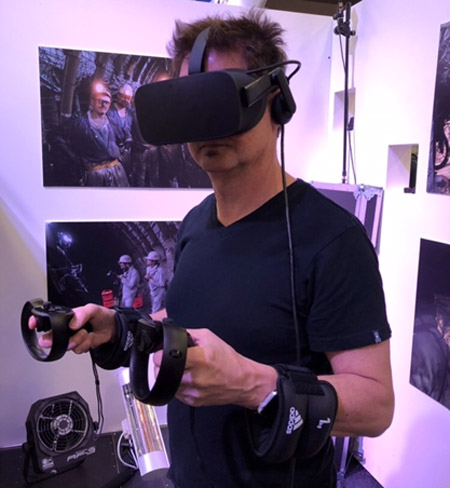 I also tried a new kind of VR from Sony (SNE). Instead of a visor, you wear a helmet with a high-definition video projector on top. They put you in a white room, and the helmet projects a new reality wherever you look. Not having your face covered makes it a different experience. I thought it seemed more realistic – sort of like the Star Trek holodeck.

All this is still experimental. People are trying different ideas, and some of them won’t work. But I saw a huge leap just in the last year.

In the article I mentioned above, I also wrote:

For example, in this fake new world, when you see a familiar face say something surprising, you can no longer assume it’s real.

The “Deepfakes” Are Coming

Unlike virtual reality, AI-driven “fake” video is ready for primetime.

With tools that are available right now, computers can study a person’s voice and facial expressions, then produce a convincing video of that person saying… anything.

I know that’s hard to believe. You can see a demonstration video here, produced by University of Washington researchers. They use clips of former President Barack Obama, but it could be anyone. 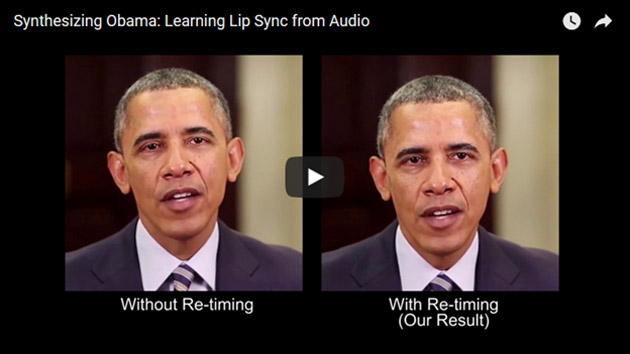 Well, not quite anyone. The neural networks need lots of video sample data to produce these so-called “deepfakes,” so they work best on public figures, like politicians or actors.

Take politicians or top business leaders, for example. Stock prices often move when a CEO or a Federal Reserve official says something important. But did they really say it? With this technology out there, you can’t be 100% sure unless you were in the room.

The potential for mischief is obvious. Worse, the mischief-makers can make a bundle by generating price movements, so you can bet it will happen. We just don’t know where or when.

The quandary is that these technologies have valuable, legitimate applications, but they’re also highly vulnerable to abuse. VR producers tinkering with new ideas may discover methods that are dangerous in the wrong hands.

I suggest you identify a few reliable sources whom you know to be real. Don’t expect them to be infallible; as we saw last week, even knowledgeable, well-meaning people are subject to “expert blindness.”

What you want are informed yet skeptical curators who can recognize what’s real and valuable.

I’m lucky in that regard, since I talk to John Mauldin almost every day. In addition to my own sources, I get the benefit of his network to follow the economy and financial markets. We know they’re real people, not simulations.

You may not have direct access to John (though reading his Thoughts from the Frontline is the next-best thing), but you can build your own circle of trust. When you can’t be sure what’s real, quality is more important than quantity.