Back in June of last year, I called the top of the stock market. Right here. As you know, it was not the top. The top happened about seven months (and 16%) later.

A couple of weeks ago, I said we’d talk about that call someday.

Today is someday. My thoughts:

So it wasn’t the best call, but not the worst, either. This brings me to my next topic, which is:

One man’s financial newsletter is another man’s “independent research,” which is what New York State Attorney General Eliot Spitzer was pretty passionate about in 2002, when he negotiated the research settlement with the banks.

Forbes has a good summary of that here, but the idea was basically that broker research was biased because of inherent conflicts of interest.

People want objectivity. The nice thing about a newsletter is that you can say pretty much whatever you want, and I do. The only financial product I am selling is the written word, I have no conflicts of interest, and I’ve been doing this since 2004 out of a sincere desire to help other people get smart and make money. I’ve helped thousands of people do this over the years.

It has always been my firm belief that financial literature shouldn’t be followed blindly. It should be used as an aid to decision making. New subscribers to The Daily Dirtnap are usually surprised to find that there is no explicit model portfolio and no performance tracking.

When I consume independent research, I couldn’t care less how “right” the analyst is, as long as I’m given cool stuff to think about. I can name a couple of shops that are as wrong as wrong can be, but I am dying to get my hands on a bootleg copy of one of their letters.

Even the poor sell-side research guys—the best ones aren’t necessarily the ones who perfectly time their buy and sell recommendations. The best ones have the deepest understanding of the industry they cover and can make consumers of the research smarter.

When you read a newsletter, the following things should happen:

If you have a newsletter ticking those boxes, that is how you help people.

I encourage people to use every source available to get their financial information. Blogs, Twitter, newsletters, research, free or paid, whatever.

2) Don’t make any calls to begin with.

And when I say “call,” I don’t necessarily mean someone saying “buy this here” or “sell that there.” I mean someone who takes pains not to say anything that might be verified wrong at a later date.

I read some stuff and I say to myself, do you have an opinion on the direction of the market, or some asset class, or stock, here? Because if you don’t have an opinion, what is the point? Especially beware someone who is pushing a financial product but is unwilling to put his reputation on the line.

As a trader, my reputation was on the line on a daily, hourly, or minute-by-minute basis. If I got hit on 500,000 XLE and didn’t get my hedge off, I needed to have an opinion on the direction of XLE over the next 5-10 minutes. I was forced to have those types of opinions every day, and if your opinions were bad, you lost money.

I got pretty good at having opinions.

Playground rules: You take your shots, and if you come up short, you own it. My top call sucked somewhat. Paraphrasing Wayne Gretzky, you’re a wimp if you don’t take any shots.

One final thing: I am having another party for subscribers on Thursday, May 10, at Hotel Chantelle (which is a club, not a hotel) in New York City. 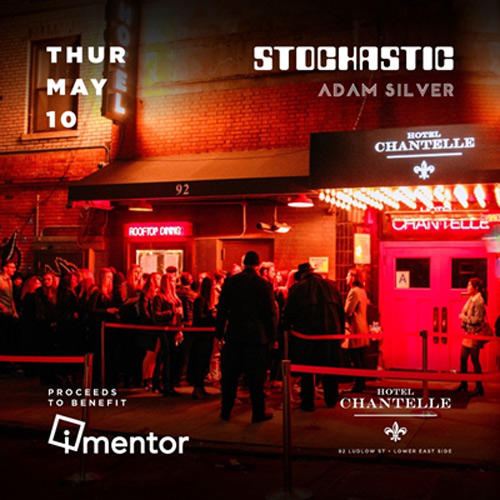 It’s a gorgeous space, the music is going to be great, and you’ll get to mingle with other subscribers. The party goes from 8pm-12am, and Hotel Chantelle is located at 92 Ludlow Street in the Lower East Side.

Please go here to buy tickets. See you there.

The largest challenge with calling a top are the central banks of the world. They have been buying into the markets so strongly since the “great recession” that honest price discovery has been destroyed. Their further shenanigans are impossible to predict. The only certainty is that if and when they stop, the adjustment will be spectacular, and downward. In addition to this disaster is the parallel disaster of government finances.

Nearly every governmental unit on the planet and nearly every level is bankrupt when the current costs of future obligations is considered. Adding these two huge black swans together our future is looking rather dark…