I just returned from a cabin in Wisconsin where I spent a couple of days with some of my old Lehman pals. Usually our reunions revolve around drinking, ripping on each other, playing cards, more drinking, and in this case, eating lots of bratwurst. When in Wisconsin, do as the Wisconsinites do.

We also played Pass the Pigs, a game of risk and money management—very much like craps, except you’re not dealing with fair dice.

In Pass the Pigs, you roll pig-shaped dice to score varying amounts of points. If the pigs both land on the same side, you score 1 point. If one lands on its back (razorback) or its feet (trotter), it is worth 5 points. If both land on their backs or their feet, it’s worth 20 points. 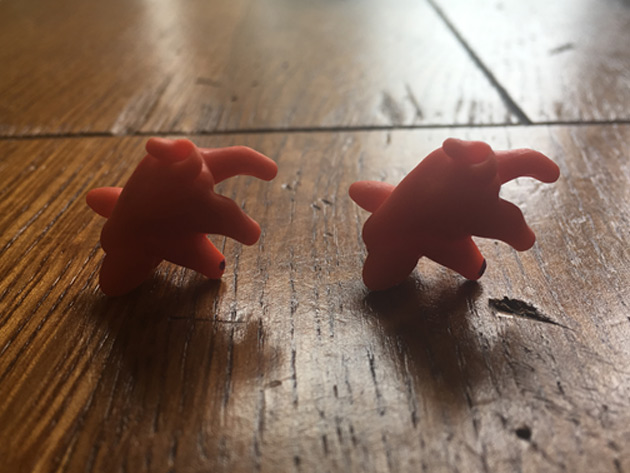 Here is how the game works—you roll the pigs and score points until one of two things happen: you either pass the pigs, and bank your score until the next round, or you roll a side out.
A side out is where the pigs land on opposite sides, which resets your score to its starting point, and you lose your turn. First person to 100 points wins.

I got curious about the math behind Pass the Pigs so I did some searching online. Wouldn’t you know, there have been several academic papers published on the math behind the game, which I appreciate, but also speaks to what passes for research these days.

Anyway, people have roughly figured out the odds of each roll, simply through trial and error. In one study I saw, the professor got his students to conduct over 11,000 trials. The life of a grad student.

Basically, you have a 21% chance of a side out on any given roll, so the chance of still holding the dice after ten rolls is low. A 20-roll possession would be an epic roll. I did see a 90-point roll last weekend, but it’s usually wise to pass the pigs after 20 points or so.

Obviously, each throw of the pigs is an independent event, and getting “hot” in pig-rolling has no more significance than getting hot in coin-flipping or dice-throwing—although we tend to believe it does.

I suppose it is worth all the ink because people rarely do it. It’s a difficult skill to learn. When we make money, our instinct is to take profits immediately, and pass the pigs. As you can see from the chart below, the likelihood of getting to 100 points on one roll of the pigs is very, very small. 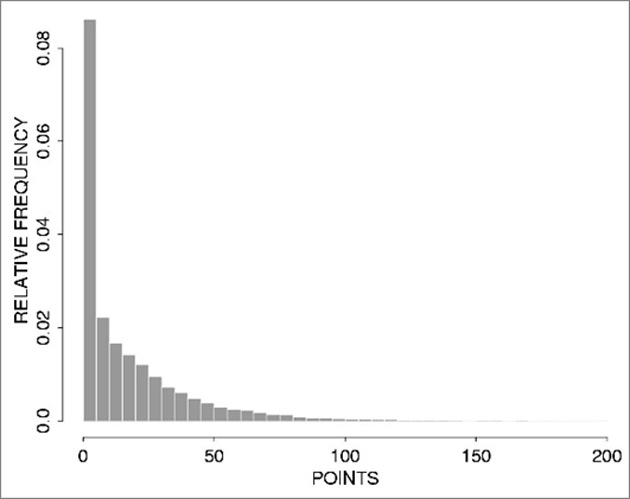 If the probability of a “home run” trade by adding to winners over and over again is very small, why do people do it? Well, people do it in the belief that markets trend, and that pig rolls are serially correlated.

If rolling a double razorback meant there was an increased chance of rolling another double razorback, then you would be reluctant to pass the pigs to the next player. But we all know that pig rolls are independent events, and market observations are not… right?

We have more or less disproved the efficient market hypothesis—even as markets have become more efficient. Trend following is real. I have a mixed track record personally with trend following—I have worn out my welcome in a few trades over the years and it has cost me dearly.

It is my personal theory that trend following happens in regimes, like volatility, and lots of other things. I talked about this here.

There has been lots of discussion recently about whether the trend is up or down, but really, over the last couple of months, it has been trendless. I can think of only one trade I would consider supersizing over the next few years (I have mentioned it in The Daily Dirtnap).

So if trend following is perhaps in hibernation, maybe this is a good time to be hitting singles and doubles instead of trying to uppercut the ball over the fence.

I spend most of my time telling people they should have a very long time horizon, which is the only way to gain an advantage over the computers. But in the current environment, it is better to have a shorter time horizon. One measured in months, not years.

Don’t misunderstand me—most people have no business trading tactically. Just think about taking profits (and cutting losses) a bit sooner, rather than later.

As for the pigs, yes, I am easily amused.

I’ve played Pass the Pigs for years with huge enjoyment.  What you don’t mention is that as you get into the game, and possibly enjoy a beverage, these pigs become more than pieces of plastic but real characters with emotions, caprice and skill.  No wonder we ‘always stop on a sider’ and want to show that the pigs can do it again after a double razorback.  Stocks, of course, are much less spirited hence we are able to apply rules dispassionately - or can we!!!

In one of my fighter squadrons, we called them “Left-Leaning Jowlers”....very rare.  And we had a rule that if you rolled one, there was a payment that had to be made (think ‘empty your glass’).

Thanks for bringing back the fond memories.

I love the pigs!  Any man who can go to Wisconsin, eat bratwurst, play a pig game…can’t be all bad!

I believe the original pigs game was called PigMania, sold back in the 1970’s.  I still have one, played it with my children, then grandchildren.

I don’t remember ever rolling a double leaning jowler.