So a few important things happened last week. The US election was one—but, in the short-term, not necessarily the most important.

We are headed into a cold viral winter. COVID-19 cases, hospitalizations, and deaths are rising fast across the US. The next couple of months are locked in, no matter who is in charge.

We are also in a deep recession, which the present virus wave will aggravate, not because governors order lockdowns (they probably won’t) but because people are rational. Most will keep avoiding places they perceive as risky, like restaurants, bars, airports, hotels, and shopping malls. That’s why so many millions are unemployed.

This is obvious to Federal Reserve Chair Jerome Powell, who said last week, “A full economic recovery is unlikely until people are confident that it is safe to reengage in a broad range of activities.”

Such confidence won’t appear until we have the virus under control, which means mid-2021 at best. That’s how long it will take to get most people vaccinated, assuming an effective one is approved in the next month or two (which isn’t guaranteed).

So what happens to our economy in the meantime? Two people will decide.

This year has been such a whirlwind, it helps to review how we got here.

You can trace this visually by the US jobs data. Here’s a chart by Torsten Slok of Apollo Global Management. 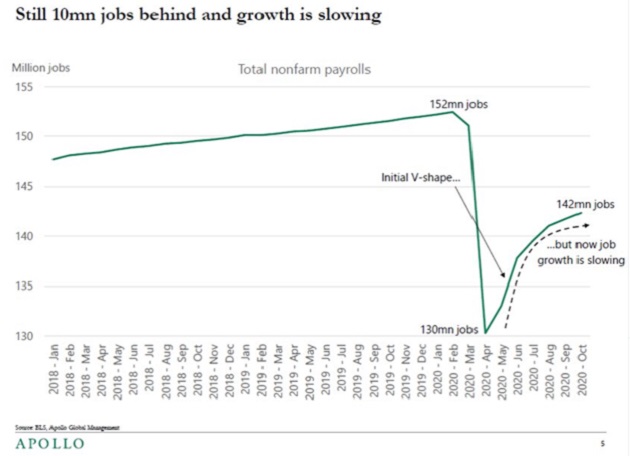 The number of US jobs dropped sharply, then recovered about half the loss. Now the pace is slowing and could soon turn down again.

That recovery, which still left millions unemployed, wasn’t really a recovery. It was more like using powerful drugs to revive a comatose person. In this case, the drugs were government benefits. And since the patient is still unable to stay conscious on his own, withdrawing those drugs will send him back into a coma… which is what’s happening.

Note also, the situation is probably worse because so many workers have left the labor force. This means they no longer count as “unemployed” because they aren’t seeking work. Many are parents of young children who haven’t returned to school.

Likewise, many “employed” people are still in trouble after having their wages or hours cut. One study shows that if you define employment as a full-time job that pays a living wage, the true unemployment rate is 26.1%.

The CARES Act expanded unemployment benefits ended as of July 31. The small business Paycheck Protection Program (PPP) gave recipients 24 weeks to spend payments that mostly occurred in April or May. So they are now out of cash, or will be soon. Airlines have spent their payroll support money and already laid off thousands.

The simple answer is to pass another relief bill like the CARES Act. (Note, I call this “relief” instead of stimulus because the goal is to maintain the previous trend, not generate new growth.) But as yet, it hasn’t happened.

The House, under Democratic Speaker Nancy Pelosi, passed another large relief bill in May. Republican Senate leader Mitch McConnell said at the time he wanted to wait and see if the economy recovered before considering next steps.

This is not due to more testing, as President Trump wrongly says. Cases are rising far faster than the number of tests administered.

We know hospitalizations and deaths lag new cases by a few weeks, and now they’re rising too. So it looks like November and December will be rough.

So why no relief bill?

Well, we aren’t privy to all the negotiations. But whatever the issues, this isn’t going to get better on its own. The economy bounced last summer mainly due to generous fiscal support which is now gone. Without more, and soon, we will see higher unemployment and mass foreclosures, evictions, and bankruptcies.

Treating the symptoms doesn’t cure the disease, but it helps. Economically, we are letting the patient suffer while a proven-effective pain reliever sits on the table, unused.

The longer they wait, the worse the economy will get. And they have already waited too long.