We are in a bubble, and we’re all doomed.

I saw a TikTok video over the weekend with a young girl singing and dancing about how she was going to take Dogecoin “to the moon.”

Dogecoin, as you may know, is the joke cryptocurrency that is a joke. It has no economic purpose, not like the rest of them have much of a purpose, either.

Elon Musk recently bought some. I am not sure what he is trying to accomplish. Gene Simmons, the bass guitarist for KISS, is involved somehow. I can’t keep track.

This was after Lindsay Lohan did a Cameo video where she was pitching Ethereum. I am happy to not be on the same side of the trade as Lindsay Lohan.

It's not just crypto. Yesterday, I walked into work and saw that Tilray (TLRY), a well-known marijuana stock, did this: 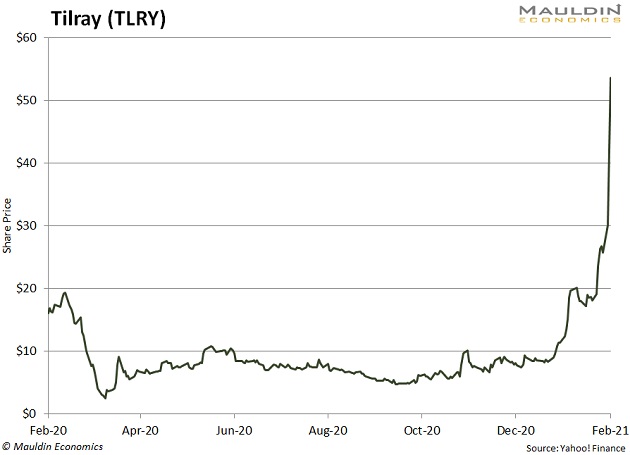 These are not the sorts of things that happen on the lows.

The periods of time where it’s easy are few and far between. But you know when you’re in one, because the retail investors get involved.

If you had a Super Bowl party over the weekend, I’m sure there were some conversations about stocks in your house, from people who have no business investing in stocks. It is a national obsession.

After a while, investing will go from being easy to being hard again, and then everyone will go back to pipefitting or whatever else they do to earn a check. But now we have pipefitters who are contemplating leaving their jobs to stay home and day trade because it is just that easy.

You buy something, and it goes up. You can be your own hedge fund.

There was a study of day traders in South Korea some years ago. The researchers observed the behavior of a few thousand of them. After six months, 90% of them had given up. After a year, the 1% who were left barely had enough money to cover their daily expenses.

Nobody got rich. Don't expect those Lamborghinis you see on Instagram to stay parked in their driveways forever.

We are here for a few reasons.

All of this caused risk assets to reach absurd levels.

There is a school of thought that the Fed has recognized its error and may begin tapering in Q4. That should be interesting, to say the least.

Everyone knows this. What they don’t know is what happens next.

I suspect that the downturn will come from the Fed tightening prematurely, relative to expectations. I have heard that the Fed is not really aware of its role in creating the bubble, but it’s kind of hard to ignore the accumulation of evidence after a while.

The Fed has two mandates: price stability and full employment. Right now, it is paying much more attention to the latter. But 20 years ago, we speculated whether the Fed should have a third mandate—to prick an asset bubble to prevent it from getting any bigger.

Alan Greenspan had some thoughts on it at the time. He said that it is difficult to know that you are in a bubble—you only know with the benefit of hindsight. But I think you would have to be pretty obtuse to not see the signs that are everywhere.

In terms of tapering, there are a lot of different ways the Fed can do it. It can:

The Fed has to manage the communication on this very carefully. Otherwise, it has the potential to crash the market. That's because the market is entirely dependent on Fed stimulus at this point.

There have been some hints of it—Atlanta Fed President Raphael Bostic has said that tapering might be an option at some point. So far, the market has mostly ignored it.

As to whether the Fed will ever sell assets off the balance sheet, the answer to that is: probably never. It’ll let the bonds mature and reinvest the proceeds.

In order for the balance sheet to shrink over time, it would have to not reinvest the proceeds. The last time that happened, it was a little bumpy in the market.

One of the five surprises for 2021 I listed at the beginning of the year was that the Fed might start moving in a more hawkish direction prematurely.

That is a real risk. In fact, it is really the only risk, because people correctly point out that the economy will recover strongly in the second half, once most of the vaccines have been distributed.

But this is a market phenomenon, not an economic phenomenon. If we learned anything from 2020, the stock market is not the economy.

For clues as to when this might happen, keep an eye on repurchase agreement (repo) rates. And keep an even closer eye on your weekly 10th Man issues. I'll help you understand what's happening, as it happens.

Make no mistake: The bubble is real. We haven't even scratched the surface of how crazy things are about to get.

But if you're following my lead—cashing out of the stocks that are in the most danger and being more selective than ever with what you buy—there's nothing to fear.

In fact, I think you'll agree there's a lot to look forward to.